Unmasking Herstory: Nastassja E. Swift's "she was here, once" at U-M's Lane Hall 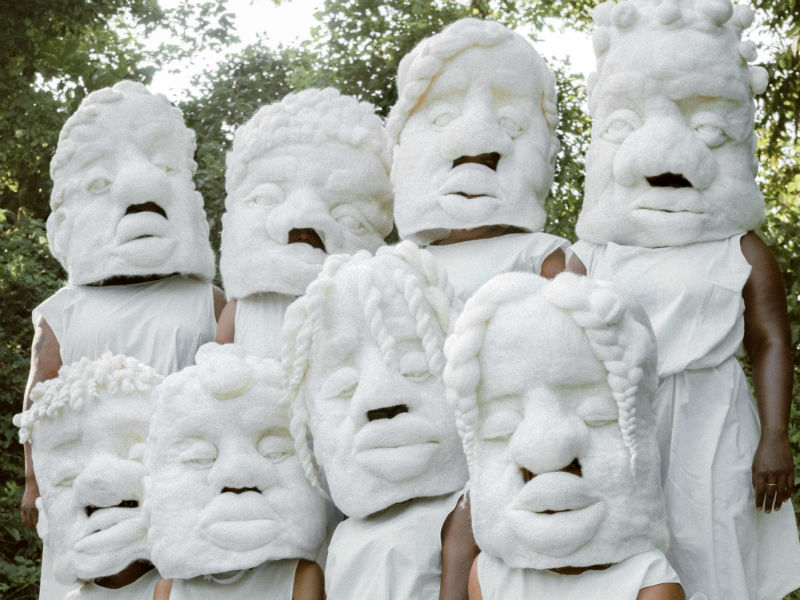 Nastassja E. Swift wants to know what's behind the mask.

The Virginia-based artist's exhibit at Lane Hall, the home of the LSA Women’s Studies program at the University of Michigan, is part of a larger performance piece, titled she was here, once. Swift, in her artist statement, expands upon the intent behind her work:

Circling within conversations of marginalization, use of the black body and otherness, my work incorporates the idea of masking as a metaphorical tool to explore what it means to cover one’s face with another, questioning who’s being hidden and who’s being amplified. The mask themselves often acting as vessels of stories told through movement and in form, depicting the faces of our ancestral mothers as a way of demanding space for her and retrieving her power in the form of visibility of homage. Through fusing these larger-than-life size felted wool portraits with dance, I am able to shape experiences through storytelling and articulate self-identities in relation to ancestry.

Lane Hall’s gallery space is filled with various components of the project. Originally enacted by Swift and a group of eight women in the summer of 2018. The performance took place in Swift’s home city, Richmond, Virginia. First, the artist has suspended three of the large sculptural, white fiber masks worn and made by the women in the project from the ceiling in the main hall. Second, photographic stills from the initial performance line the walls of the gallery space. Finally, two television screens play both a mini-documentary and short film about Swift’s project on a loop.

The short film Remembering Her Homecoming follows the performers involved in the project, with two voices narrating experiences related to the creation of the work. The exhibition text states that through these “wearable fiber sculptures, mixed media installation and film, the exhibition traces the ancestral footsteps of the Black woman in Richmond, Virginia. Nastassja Swift creates an immersive environment shaped from history, story and experience.”

The work itself engages in Swift’s history, story, and experience, but the videos take us even further behind the process and creation of this multi-layered performance piece.

In her artist statement, Swift discusses her approach by saying: “I am a multidisciplinary artist who utilizes fiber art and performance to create wearable soft sculptures that speak to womanhood, blackness and the body.” The works on display at Lane Hall incorporate fiber arts, sculpture, performance, photography, and aim for a deconstruction/disruption of typical, everyday spaces in order to ask pertinent questions about the artists’ and other women’s experiences.

Though the videos show us parts of the performance, we see it in fragments. The exhibition statement tells us the specifics of the performance, which was enacted over the course of a three and a half mile walk. The walk “began in Shockoe Bottom (the site of the importation of slaves into Richmond, and one of the largest sources of slave trade in America) and concluded in the Jackson Ward neighborhood (one of the largest Black communities in Richmond).”

The work is concerned with movement and solidarity, visiting historically significant places and markers and connecting with the past. Swift notes that in the performance piece she initially intended for the singing and dancing to be improvised, and did not want any words included in the singing.

At the heart of Swift’s project, however, is the concept of community, empowerment, and connection. Swift’s collaborators convinced her that improvised words would not detract from the work’s impact or meaning. Swift conceded, so throughout the documentary and short film, that collaborative effort can be seen and heard with the inclusion of lyrics from American folk songs such as "No More Auction Block for Me."

In the mini-documentary Remembering Her Homecoming: From the North Atlantic, to Leigh Street, Swift is asked where she sees herself in the work. She tells the interviewer that she has become more aware of her body and how it moves through space in contemporary America. The performance piece addresses this question of how the body moves through space by focusing exclusively on the movements of eight black women moving through historically and contemporarily problematic spaces.

On the exhibition website, LSA notes, “As a Black female artist working and learning within what was once the center of slave trading in the region, Nastassja sought to explore the journey of the Black female in this area, and how that journey has contributed to the stories and history of Black girlhood in the city.”

Throughout the mini-documentary, Swift discusses the process behind her work, and how it has changed her today. Swift is asked where she sees herself in her work or how the work has changed her. Swift responds by saying that in the past she was more “unaware,” though at the time she did not think of herself that way and even today does not think the word captures the shift in her perspectives after becoming involved in this immensely powerful project.

The larger-than-life-sized masks were made as a collaborative effort by the group of women involved in the project. Swift discusses this process of the production of community fiber arts in the interview featured in the mini-documentary. Swift is interested in traditional methods of fiber and textile production, which are still seen and celebrated in African, Indian, and South American cultures, though in ancient times these communal arts would have been much more widespread.

With the inclusion of the mask, questions of identity arise. Swift notes that the mask can relate to the ancestral past. The mask simultaneously hides the identity of the performer and creates a new one. While the mask can be seen as a tool to obscure identity, within Swift’s project the mask is a means to an increased interconnectedness with the past, and a means to claim space that has traditionally been denied to the subjects. Within the confines of this performance, eight women confront the history of Richmond, Virginia -- and on a larger scale, America.