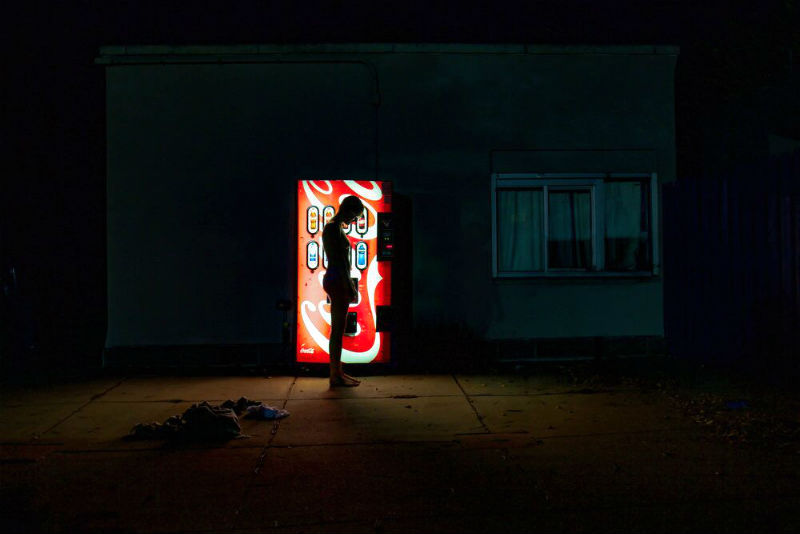 The Ann Arbor Art Center’s Earthbody features works from 11 artists whose works explore, in some aspect, the relationship between the body and the environment. The exhibit focuses on works of current and recent students at the Penny W. Stamps School of Art & Design at the University of Michigan.

The Earthbody exhibition text is short and to the point: “How does our understanding of our bodies as earthly objects affect our ability to perceive and engage with the environment? Earthbody explores these relationships between body, self, and environment.”

As is typical of the group shows at the Art Center, there are a variety of approaches that engage with the subject of the exhibition. From imagery that appears grotesque or unsettling to those works portraying a sense of serenity, the artists pull from personal and shared histories to delve into the broad topics of the body and the environment.

Sophie Hullinger, a mixed-media artist, contributed multiple digital collages to Earthbody, each featuring the cut-and-paste aesthetic of analog magazine collages. The imagery shifts between natural backdrops, human subjects in anachronous positions, clothing, and places, and surreal elements. In addition to collage, Hullinger also works with stop-motion animation, playing with the “contextual and visual malleability of photographs.” Hullinger’s imagery takes on the historical perception of photography as a means of objective documentation by altering images into cross-cultural amalgams that ask viewers to question visual truth and assumption when looking at photographs.

Shreya Patel’s sprawling, multi-media work Hairstudy is made from everyday objects such as window screen, yarn, and coffee stirrers. Patel uses experimental techniques to produce work that she terms “abrasive and highly textured,” addressing her own identity not through beauty but drama in form and approach.

Erin Wakeland, a current student at the Stamps School, is a multi-media artist inspired by intersections of identity, landscape, and the evolution of the self. Her work in Earthbody is diverse and includes photography, painting, and installation. The first work in the show, Untitled, is a dramatically lit photograph of a figure in a dark space, standing against the bright lights of a soda machine.

Another work, Pickled Past Life, is a sculpture made from found objects: glass jars, brine, paper, dirt, grass, rocks, and “personal clutter,” which includes pieces of paper, a polaroid, and other nondescript items. In this work, Wakeland explores how cultural attitudes toward the body have shifted through preservation practices -- or lack thereof. Wakeland’s glass jars are “organized according to Egyptian embalmment traditions,” each mock-canopic jar filled with personal mementos instead of human organs. The final jar contains only brine and suggests an unknown and intangible future.

Finally, Wakeland’s large-scale painting Half Earth, painted in shades of blue, green, and black, is an abstract meditation on self-preservation. Wakeland states that she is particularly interested in “how we reconcile being of the Earth yet partaking in its mutation and destruction.” The abstract backdrop is interrupted by a harsh black rectangle that frames the composition, creating a visual binary between the natural, flowing forms of the backdrop and the hard, geometric form of the rectangle.

Emily Legleitner is an artist working primarily with woodcut printmaking. Legleitner’s prints on display are part of a larger body of work, You can see it on the horizon now, just past forgiveness (2018/19), and employs self-portraiture to explore the concept of the body, identity, and self as an act of performance.

Legleitner’s works portray intimate moments in a domestic environment, often self-portraiture, which is intended to “share private glimpses of personal experience.” Legleitner’s prints in the show include a double-paneled work of a mirrored female figure titled Bury Me With It I & II and a print that mimics a text conversation, Who are you seeing, which investigates the transmission of trauma and abuse through digital means.

Yeager Edwards employs mixed media to create complex, hanging fiber works. One such work, Skin, Hair, Yoni, Phallus, contains common elements such as silk, wool, twine, and cotton. Edwards also includes non-traditional materials for fiber-works such as, in this work, a found table leg. In the center of one of the rooms of the gallery space hangs his other work, I can feel you in my gut, still, which is made from wool, foam, hair, hair ties, rubber bands, and wax. The biomorphic, hanging forms contain trace materials from a human subject. One of Edwards’ concerns is the “inherent relationships between material and viewer,” which becomes particularly pertinent to the interpretation of these works, which contain such a human element. We may recognize the component of hair in the work, but these sculptural, hanging talismans evoke a feeling of unease. 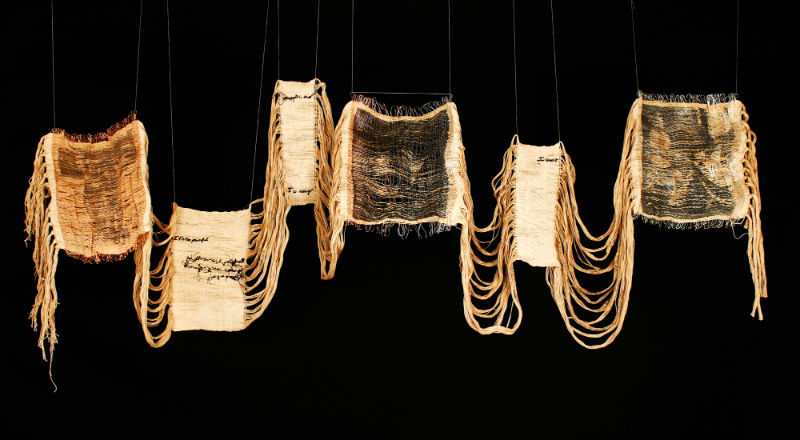 Brooks Eisenbise, in between is just too much uncertainty

Brooks Eisenbise is another artist working primarily with fiber, contributing a sprawling, hanging, fragmented panel titled in between is just too much uncertainty, made from cotton dyed with tea, wire, screen-printing processes, and embroidery. Eisenbise is interested in “the disconnect between reality and memory” in her use of textual and visual elements within the work. The piece is comprised of multiple panels of fabric, which are separated and connected by drooping cut-out fabrics that bind the panels together while lending an air of fragility to the flow of the work. Some panels include embroidered text and screen-printed text, which echoes the artists’ primary themes: “family lore, history, grief, and the way our stories shift over time.” Her other piece in the show, Carrying All of This, is a single panel, tapestry-style work that appears stained with blood through the use of strategic embroidery and dye. Both of these works have elements of violence, loss, and sustained grief.

Livvy Arau-McSweeny, a recent graduate from the Stamps program, is a printmaker and photographer who aims to employ alternative and sustainable processes to create her images. Her resulting images are intaglio and relief prints, as well as a black-and-white film photograph. The works appear as masterfully done as those created with more traditional, often toxic means. Arau-McSweeney’s work aims to shift away from chemicals that can harm the body and the planet, and use readily available non-toxic substances to replace them.

Kara Calvert’s installation Confessions to These Stones is an interactive, multi-piece work. Calvert uses rocks as a bookbinding medium, becoming the front and back covers of the books. The installation consists of four photographs above a shelf. The shelf holds numerous rock books, each with a different watercolor comic between the front and back rock. The comics explore the intersections of the artists’ experience as a living human, natural spaces, and mental health.

Marjorie Gaber’s ceramic sculpture Big Lillith is based on a form of Mesopotamian-Jewish traditional protective magic: incantation bowls. Gaber draws inspiration from The Kelsey Museum’s collection of incantation bowls. In Big Lillith,  Gaber imagines an ancient demon is trapped inside, the writing on the bowl trapping her inside. The animal-like form of the sculpture is covered with markings to represent the unintelligible text of the original incantation bowl, a text meant only for the Gods to understand.

Miles Honey, currently enrolled in the program at Stamps, is a cartoonist, printmaker, and self-described “humble draftswoman.” Honey’s comics have been published in a variety of media, but the works on display at the Art Center are excellent examples of her intaglio printmaking prowess.

Natalie Giannos’s large-scale paintings probably represent something bodily, though Giannos paints from memory, “often shrouded in redactive, colored haze.” Giannos’ palette is limited in both works in the gallery, one comprised of essentially containing three planes of color: purple, orange, and yellow, and another, titled I remind myself to breathe and make my limbs stop twitching, consists of shades of yellow, painted on an amorphous canvas. Giannos, in her statement, says that this “amalgamation of large-scale fleshy forms and large swatches of color and texture” is a way for her to understand and make sense of the world around her. These works are meditations on past experiences, distilled with texture and color.

The exhibition will only on display from July 12 to 27. Make sure to stop by and see these intriguing meditations on the body and the environment, and pick up a Pirate Code for the Summer Game while you’re there.