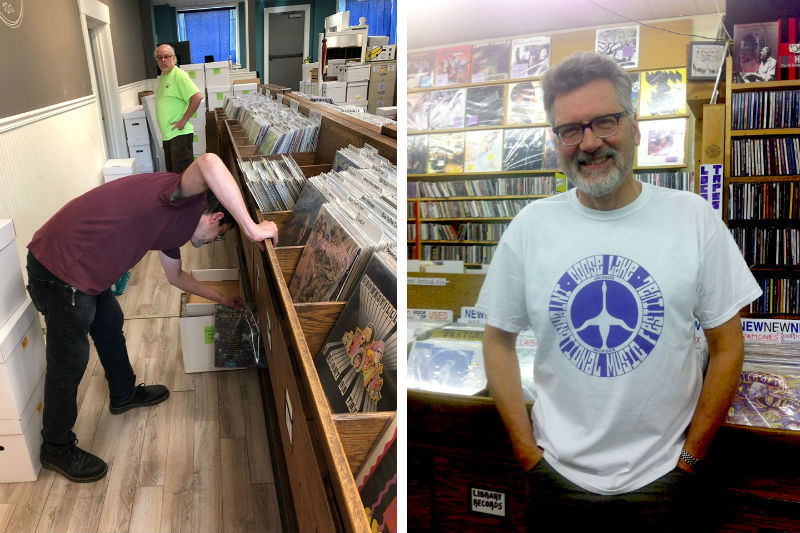 With the end of summer as their deadline, the pair began quietly but urgently scouting new locations back in January, without immediate luck. But the serendipitous retirement of an old friend and fellow local entrepreneur saved the day with mere weeks to spare. After 17 years in Kerrytown, Vicki Honeyman decided to close her boutique Heavenly Metal, and all agreed it was the perfect solution for Encore. They signed a new lease for 208 North Fourth in June and heaved a sigh of relief. “It really did feel like the heavens opened up and said, ‘We want this place to continue,’” said Dwyer.

There wasn’t time to bask in good fortune, however, for the logistical demands of moving Encore’s vast inventory required careful planning. When asked how many LPs are involved with the move, Dwyer isn’t sure how to answer. “We measure them by square feet, linear feet of records,” he said. “The one number I know off the top of my head is 20,000 45s. Just 45s. So that gives you an idea, LPs are probably three times that, easy.”

The first order of business was to stage a massive clearance sale, repricing thousands of LPs at 94 cents in hopes of thinning inventory and lessening the burden come moving day. It was a deep cull, drawing in particular on records that had been in stock well before the store was known as Encore. “The amazing thing is that it’s been a record store constantly, in that location since 1965,” said Dwyer. “Some of the stuff that we’re selling on clearance has literally been there for 50 years.” 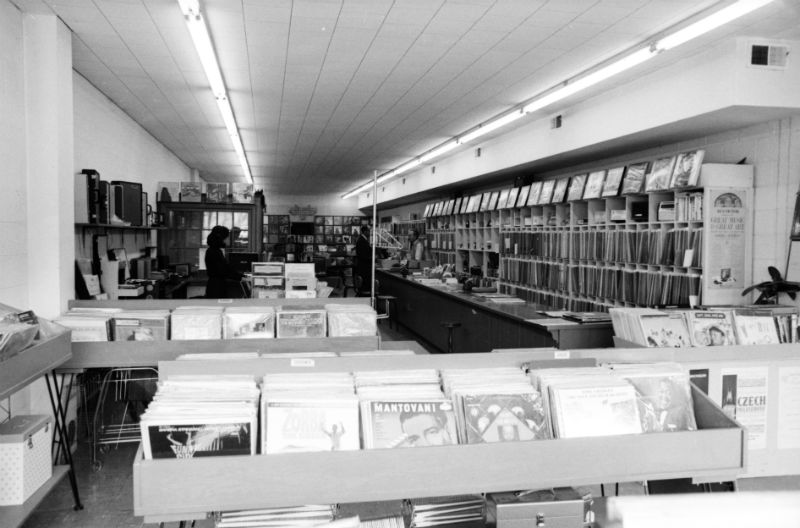 The store known as Liberty Music occupied the spot at 417 East Liberty until the late 1980s, when staffing shakeups led to its closing. But two former employees were determined to save the shop and retained the original store’s inventory and custom-built racks to start Encore Recordings in 1992. It has remained an essential part of Ann Arbor vinyl culture ever since, a place where it’s easy to find something you’ve never seen before and might never see again.

Dwyer was a high school English teacher in 1996 when he started working for Encore owner Peter Dale over summer breaks, and former Wazoo Records employee McClelland came aboard shortly afterward, so they had a long history with the store when Dale decided to retire in 2010. As happy as they were for their employer’s impending freedom, both felt strongly about seeing this local institution snuffed out. Once again, a pair of employees needed to step up and take over. “So Bill and I talked to our wives and got the approval from them to make it continue,” said Dwyer, “and this is just a continuation of continuing the place, just to keep it going.” They purchased the business and elegantly rebranded as Encore Records, becoming the stewards to a massive collection of vinyl. 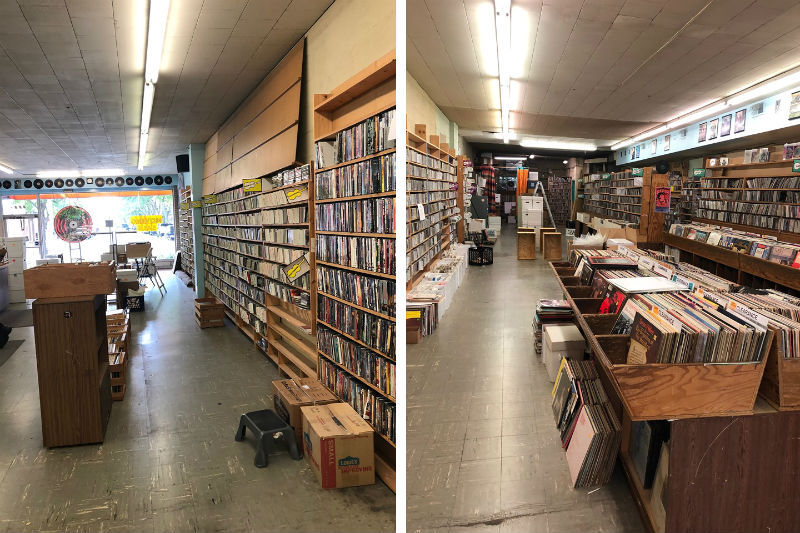 Inside Encore Records' old Liberty Street location as the crew was in process of packing up all the stock. Photos by Michael Burbo.

The clearance sale succeeded in reducing stock, as well as publicizing the move to Kerrytown. For weeks Encore saw increased crowds of crate diggers happy to sift through the voluminous excess of the store’s inventory, records spanning every genre, style and audience. “It was a healthy purge for us,” said Dwyer. “Part of the vastness of that collection was a combination of the decades of accumulation and different buying habits. Peter’s philosophy was, ‘If I don’t have it, I’ll buy it,’ because he had the space. Knowing that we were coming into a smaller space, we realized there’s a lot of stuff here that we’re not gonna be able to keep.” 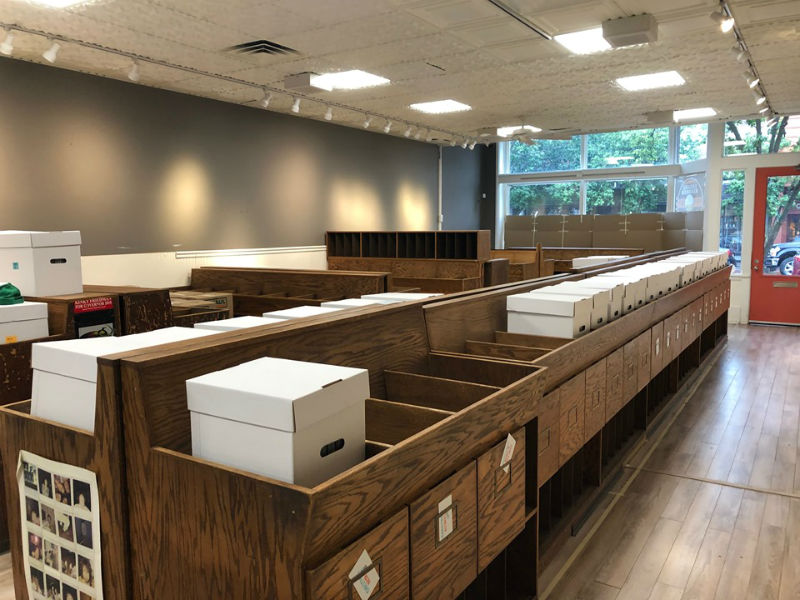 The empty insides of Encore Records' new Fourth Avenue location. The bins will be stocked full of vinyl for the store's August 17 opening. Photo by Michael Burbo.

The North Fourth location isn’t as large as their former address, which requires a somewhat narrower focus in operations going forward. “It is going to be a smaller, tighter, more curated collection, we’ll have to change the way we buy stuff,” Dwyer said, although the advantages of the new digs outweigh any concern. “It’s clean, it’s a nice neighborhood, it’s affordable, it comes with a parking spot for Bill. We’ve got a front door and a back door, ceiling fans, it’s very comfortable.”

“All of us will miss being that close to the Michigan Theater,” said Dwyer. “We were a go-to stop on your way to a concert, or a movie.” Still, he views the new environment as promising. “There’s a different kind of foot traffic over here in Kerrytown -- and lots of foot traffic. It’s nice to be near the Farmer’s Market and the Co-op. It’s more of a shopping neighborhood, whereas Liberty is becoming more of a bar and restaurant neighborhood.”

After weeks of preparing the new place for the move, packing up the old store and dealing with capacity crowds all the while, Dwyer and McClelland took pity on their exhausted staff and hired a moving crew to handle the rough stuff. Anyone who collects records knows they can be the heaviest, bulkiest thing to maneuver during a move, and Encore’s epic collection was sure to bend backs. “The movers did a great job,” said Dwyer, “I’ll give a plug to Two Men And A Truck. They were well worth the expenditure.”

Opening day for the new Encore Records is Saturday, August 17. All concerned are grateful to have the whole process behind them and optimistic about the road ahead, according to employee Michael Burbo. “Logistically, it's been a challenge,” he said, “especially with downtown traffic and construction. On top of working our regular shifts, we have been coming in early, staying late, and working on our weekends to get this done. It's a little stressful, but it's also been fun. Bill and Jim are great guys to work for and the staff are all very close and committed to keeping this thing going.”

“Everybody who’s working with us is really excited about the spot,” said Dwyer. “It’s just fun to be working with records all the time.”

Fred Beldin is a writer and musician living in Ann Arbor. His work can be found at www.thesearetheendtimes.com