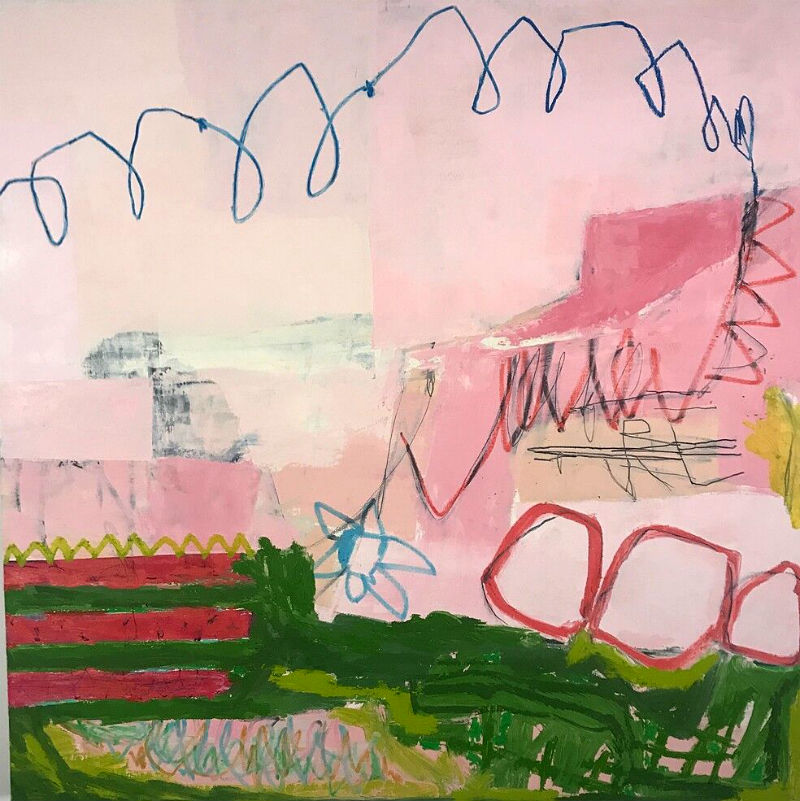 Beth Billups works with encaustic and oil and cold wax medium. Billups was born in Detroit, but spent 30 years living in San Francisco, until her 2013 return to Michigan. Billups creates abstract works, using texture, pattern, color, and mark-making to draw the viewer into the experience of the piece. Color is an integral part of the work, as the artist creates planes of color, which work with the texture of wax to indicate shape and space.

Payton Cook works with the idea of liminal spaces, defined as a space in between, neither here nor there. Liminal spaces are nonspecific, they can address the past or the future. Cook defines liminal spaces in terms of “uncertainty, fear, and hope,” and in her work, she visually represents these “transitory” moments with imagery such as windows and doors. Recently, Cook began to explore liminality through imagined emotional or mental spaces. These translate onto the canvas as abstracted, hazy landscapes, achieved with planes of color and texture. Cook described these as “vast expanses, reminiscent of a landscape that is inviting and intriguing, yet somehow inaccessible.” 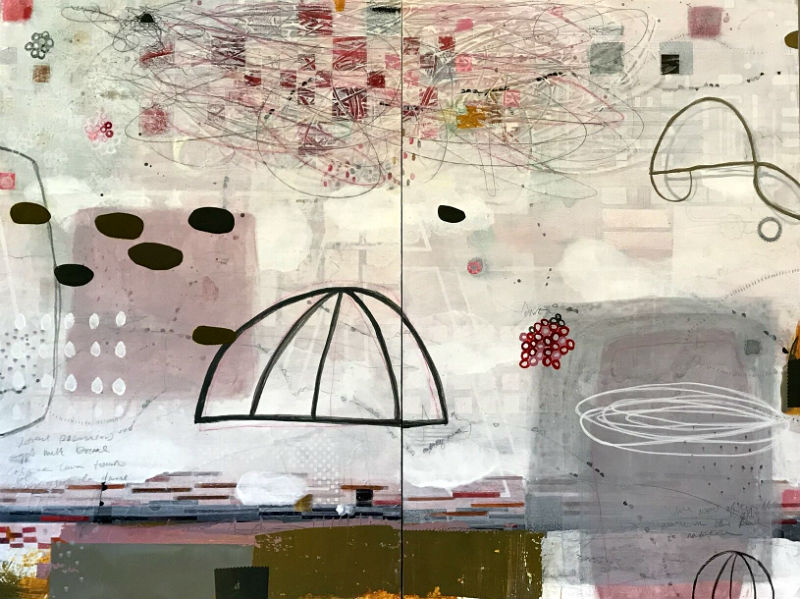 Deb Eyde is a multimedia artist working with encaustic, oil paint and cold wax, acrylic and mixed media. Eyde’s works are created by “layering, scraping, sanding, and glazing,” all processes that “reveal and conceal,” drawing a metaphor in her finished works between the process and the resulting work and the public and private face that we all have as humans. Her two-panel mixed media work Milk, Bread, Eggs… illustrates the concept of the layered self that we work to control and reveal/conceal within specific contexts. With many layers of transparent oil paint and wax, the large work reveals and conceals shapes, forms, and textures. In her encaustic work Playground, the concept is further embraced with a raised wax surface that the artist has carved into, creating shapes and lines in a reduction technique.

Elyse Gambino is a multimedia artist who creates large-scale oil paintings on loose canvas tapestries and digital collages based on her own photography. These finished paintings are based on photographs that the artist takes on a daily basis. Anything that strikes the artist as “sad, humbling, or visually striking” is documented and entered into a digital archive. The archive is a constant source of inspiration for her finished works, which are often based on digitally collaged landscapes from her repertoire. These digital landscapes either stand alone as a finished piece or become an inspiration for her fantastical urban landscapes.

Michael Garguilo currently lives and works in Royal Oak, Michigan. Garguilo is a painter and printmaker working with absurdist imagery and themes. The works on display in the gallery exemplify this trend and belong to an ongoing series named Everybody Wants to Be Caesar, in which the artist explores visual themes of physical violence. The theme of physical violence is presented in a humorous, absurd manner, with men in professional suits and ties “tussling” on the floor in a pile, in front of a nondescript backdrop. These works question whether in the verbal exchanges among high-stakes businessmen and government officials are parallel to other forms of violence, and as the series’ title indicates, the motivations of these men compel them to “attain power through any means necessary.”

Tanya Long is a ceramicist, multi-media artist, and jewelry maker. Long’s recent works explore the integration of ceramics and jewelry-making. Long is interested in the “potential for ceramics to be combined with other soft and hard materials to create sculptural and functional work.” The jewelry pieces in the show offer viewers the result of the artists’ investigation, with her sculptural yet functional pieces, including a necklace and a set of earrings made from porcelain and sterling silver.

Susan Mankowski works primarily with clay, a medium she discovered during her 30 years as a teacher in public schools. Mankowski also works with drawing and painting but prefers the tactile nature of working with clay. She is inspired by her love of nature, her children, and her students. Her passion for nature is evident in her ceramic piece Daffodils, which is an earthy, cylindrical vase constructed out of clay daffodils. The ceramic piece is colored to resemble the flower in its natural form in early spring, with vibrant green stems and yellow petals.

Elise Martin is a Detroit-based interdisciplinary artist, primarily working with video, painting, sculpture, and fiber arts. Martin explores the emotional themes of “empathy, compassion, anxiety, and loss.” Martin seeks to create intimate images that “capture brief moments of connection.” The artists’ interest in human connection is represented in her woven tapestry Sisters, which depicts two hands braiding hair. The hair, made from black yarn, cascades down the edge of the tapestry frame, adding a sculptural element and creating an illusion that we are part of this intimate scene.

John Megahan worked as a scientific illustrator for 30 years and now spends his time painting natural subjects. His background as a scientific illustrator is evident in the extreme realism and detail on each canvas. Megahan’s paintings in the gallery space are two large scale acrylic paintings representing Michigan wildlife: a Northern Flying Squirrel and an Arctic Grayling. He chooses his subjects based on their categorization as species “of special concern,” which are either threatened, endangered, or extinct, and consults biologists in his efforts to find species to represent in his artworks.

Blythe Miles, a Michigan-based artist, works with chalk pastel and drawing to depict subjects from her garden. To capture these everyday joys, she draws the produce she grows. She emphasizes color to give the subjects “an illustrative quality that honors the beauty of everyday objects.”

Deanne Neiburger was born and raised in Redford, Michigan. Neiburger is now a ceramicist working “in the intersection of [her] vision and the clay’s innate form.” Her process is driven by the serendipity of creation, the clay taking shape out of her emotional response to the material. Neiburger describes her imagery as trending toward “the dark, and sometimes creepy, but always with a hint of lightness or warmth.” Her ceramic sculptures are figurative works consisting of three small porcelain skulls and a ceramic humanoid figure, each illustrating the artists’ skill with sculpting and firing.

Paloma Núñez-Regueiro is a painter and printmaker based in Ann Arbor. She is a member of Ypsi Alloy Studios in addition to her instructional work at the Ann Arbor Art Center. Núñez-Regueiro contributes two monoprints to the exhibition. The two prints are circular, abstract forms in the center of an off-white backdrop. The printed spheres are filled with organic shapes and textures, which the artist based on Guarumo tree leaves she encountered in Mexico. The artist draws attention to tiny details, drawing a correlation between the shapes in nature and artistic representation.

Chelsea O’Hayer is an arts administrator and printmaker currently working in Ann Arbor. O’Hayer’s work explores the potential for everyday objects and images to become subversive within specific contexts. She cites “collage, performance, physical display methods and digital techniques such as glitching” as methods through which she explores “the inherent malleability of narrative within objects and images.” O’Hayer notes that within cultural institutions such as galleries and museums, the reading or interpretation of an object such as a chair can shift dramatically. Her piece OBJET d’ART is made from collaged transparent images placed on a series of three lightboxes. This piece references the systems of object management in museums and draws attention to the process by which some objects and images become treasured, laying bare the authority needed to alter the perception of a mundane object.

Claudia Selene is a painter and educator inspired by the “complex beauty of ordinary people, objects and spaces.” Her work focuses on light, shadow, and surface. Her realistic oil painting Gravitation depicts a traditional still life with a hint of vanitas, gravity pulling the already-dead flower in a vase toward the forgotten, crumbled, and half-eaten biscuit next to it.

Rhonda Sherwin is a painter and multimedia artist inspired by nature, and begins each work with a sketch that acts as a guide for “gesture and movement” that “brings that momentary vision to life.” Sherwin hopes to inspire viewers with her interpretations of the natural world. Her two works in the gallery represent natural environments presented in the artist’s gestural painting style. Gravitation represents an ambiguous aquatic landscape, while Crimson Flair represents red foliage against a gray backdrop. In each work, Sherwin focuses on what could be a mundane natural element and represents it as a monumental experience.

Jon Van Eck has been heavily involved in the ceramics community of the Ann Arbor area since he moved here in 1982. He cites spirituality and humor as the most significant aspects of his work, stating that he wants “people to think and question their feelings, beliefs, and understanding of reality” with his pieces. He hopes that his work will elicit a response from the viewer, whether it is a positive or negative reaction. Van Eck’s two ceramic vases represent the artist’s style of uncomfortable humor with unusual faces -- Grumpy Lady and Eyeless -- attached to his expertly thrown ceramics.

Sajeev Visweswaran is an artist based in New Delhi and Ann Arbor. Visweswaran works with a variety of media but drawing is at the center of his work. He is influenced by his childhood in India, the intersection of the personal and political, and the dichotomies of presence/absence, and domestic/public. His piece Pineapple is a linocut displaying Visweswaran’s skill with line-work.

The Instructor Show is a glimpse into the talent behind the Ann Arbor Art Center and allows viewers to engage with an array of wonderful works of art by active members of Ann Arbor’s art community.