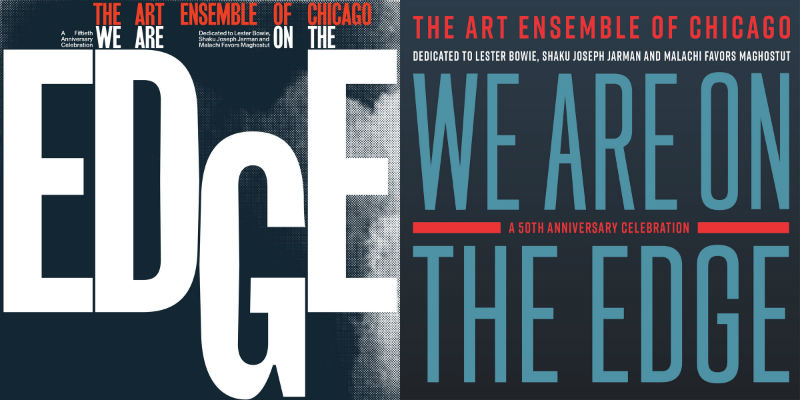 The 2018 Edgefest at Kerrytown Concert House was the launchpad for a year-long celebration of the legendary avant-garde jazz collective Art Ensemble of Chicago. The group not only performed at the long-running, annual Ann Arbor festival, it recorded a studio album during its stay here.

“This is the first performance of this 50th-anniversary project," Deanna Relyea, Edgfest’s artistic director, told me last year for a Pulp post. Ensemble co-founder "Roscoe [Mitchell] has written music for this group based on music written for the Art Ensemble years ago by Joseph Jarman, Malachi Favors, and Lester Bowie. (Bowie and Favors are deceased; Jarman is retired.)

The recorded fruits of the Art Ensemble's Ann Arbor labor, We Are on the Edge: A 50th Anniversary Celebration, was released in April on CD/digital via Pi Recordings and on vinyl in July via Erased Tapes. One part of the We Are on the Edge is live from the Kerrytown Concert House and the other section is music recorded at Big Sky, with University of Michigan professor Stephen Rush -- a longtime Mitchell collaborator -- conducting the large ensemble.

“I have been asked to conduct two pieces by Roscoe Mitchell and one by Don Moye," Rush told me last year. “I’m also providing instruments from my own collection for [percussionist] Don Moye. No question I would get involved a little bit in editing the scores, too. These things are extremely fluid and not at all like recording some of my other works like symphonies and chamber stuff. And the musicians are all amazing readers and amazing improvisers, which makes it really exciting.”

We Are on the Edge isn't the first Art Ensemble record made in Ann Arbor. Recorded on September 9, 1972, at the Ann Arbor Blues and Jazz Festival, Bap-Tizum is a free-wheeling, politically charged performance. (The first track on the LP is a band introduction by John Sinclair.)

Check out music from both albums below as you buy tickets to the 2019 Edgefest, which happens October 16-19: