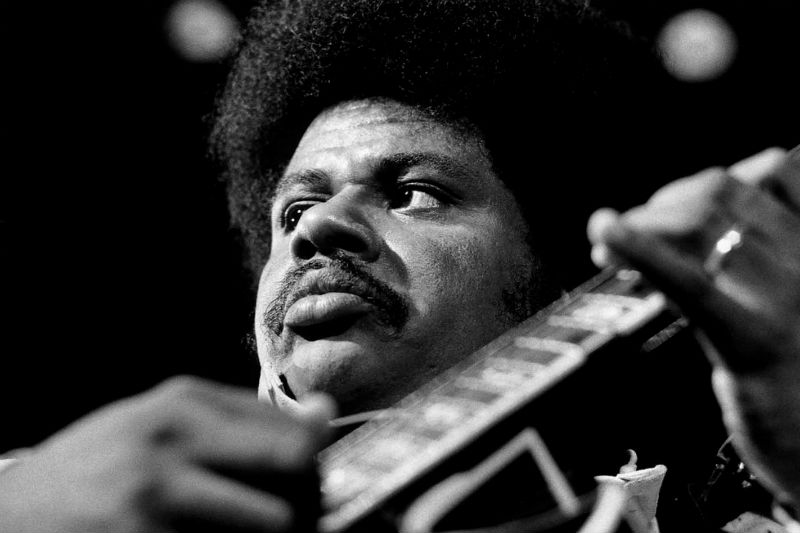 Sonny Sharrock played guitar like a boxer throws punches: with fluidity and violence. Sweet-science superfan Miles Davis must have recognized this when he had Sharrock join John McLaughlin in the ax section for the trumpeter's stellar 1971 jazz-rock soundtrack for a documentary on the boxer Jack Johnson.

In the mid-'60s, Sharrock began about a decade-long run playing with his singer wife, Linda, saxophonist Pharoah Sanders, flutist Herbie Mann, and others, but he went into semi-retirement from music after divorcing. As with many singular stylists, Sharrock's skills weren't fully appreciated when he first came onto the scene, but his reputation rose up in the 1980s when bassist and producer Bill Laswell recruited him to play in his avant-funk jazz band Material and the punk-jazz supergroup Last Exit. During this time, Sharrock resumed his career as a leader and also played free jazz with Machine Gun, with everything culminating in the 1991 avant-jazz-rock masterpiece Ask the Ages, a Laswell-produced album featuring Sanders on sax, Elvin Jones on drums, and Charnett Moffett on bass. (Sharrock also did soundtrack work for the Cartoon Network classic Space Ghost Coast to Coast.)

But on the eve of signing to a major label, Sharrock died in 1994 at the age of 53. While he died too young, the guitarist's reputation as a major force was sealed forever.

On September 11 at Ziggy's in Ypsilanti, four Ann Arbor jazz musicians will fete Sharrock's Ask the Ages by playing the  album in its entirety. Guitarist Max Bowen transcribed the music on Ask the Ages, which he'll interpret with saxophonist Andrew Bishop, bassist Aidan Cafferty, and drummer Bob Sweet.

I interviewed Sweet and Bowen about Sharrock, Ask the Ages, and how this project came together.

Q: I know Ask the Ages was reissued on vinyl this past spring but what was the genesis of the concert?
Sweet: The genesis of this project was actually kind of simple and mundane, not born of any compelling artistic motivation. We were rehearsing for another gig when Andrew offhandedly mentioned that it would be fun for this band -- Andrew, Max Bowen, Kurt Krahnke, and me -- to do some of that Sonny Sharrock Ask the Ages stuff. I had never heard the record. I am familiar with Sonny Sharrock but I've not done a lot of listening to his records, nor have I ever seem him live. But seeing as how I have such immense respect for these guys and get so uplifted playing with them, I'm always interested in ways to keep them engaged. So, if Andrew says it would be fun, I need to check it out. So I did, and thought, "Hell yeah, we need to do some of this stuff." Unfortunately, Kurt won't be on the gig with us, but, fortunately, Aidan will.

One of the challenges of interpreting this music will be that what we hear on the record is very loud. With electronic effects, many musicians can emulate the sounds that used to be created only by playing with extreme volume. However, for drummers, the story is different. Some of the greatest drummers in jazz have also been the loudest -- like Elvin Jones. You can't emulate that energy with electronic effects. You just can't. However, in many -- most -- of the music venues where jazz or derivative forms are being played, people just don't want that level of volume. It's a challenge.

Bowen: Ask the Ages is a very unique record for a number of reasons. For one thing, it is rare to hear distorted guitar and sax stretching out in a quartet setting, and the compositions are simple, having more to do with folk or blues than jazz. The result is that the music oscillates between being accessible and tonal on one hand and bracing and atonal on the other. So we wanted to explore that space as a quartet.

Q: What was it like to transcribe Sharrock's music?
Bowen: The music was pretty straightforward to transcribe. Trying to transcribe one of Sonny Sharrock’s solos would be nearly impossible, though, due to his indiscriminate slipping and sliding on the fretboard.

Q: Sharrock is usually characterized as a free-jazz player, but Ask the Ages is full of fantastic compositions. What are his strengths as a composer?
Sweet: What I like about these compositions is that they offer a simple framework that offers a maximal opportunity for free improvisation. This is the most thrilling kind of music for me, and it's something I grew up with, musically, through my experiences with Karl Berger at the Creative Music Studio. The composer offers a simple, melodic structure that you might even regard as "catchy," at the same offering the players unlimited freedom to explore and create sonic worlds. I really couldn't comment on his strengths as a composer beyond this record.

This music represents freedom and energy to me. There are a lot of people out there playing jazz, and many are playing it extremely well. And even though jazz is regarded as the music of freedom of expression, much of what we hear is very formulaic and represents "classic" forms of a bygone era. There tends not to be very much freedom to step outside of the established expectations of the norms and language structures. Playing music like Ask the Ages affords an opportunity to really stretch and search and expand and reach for sounds that have never been heard before.