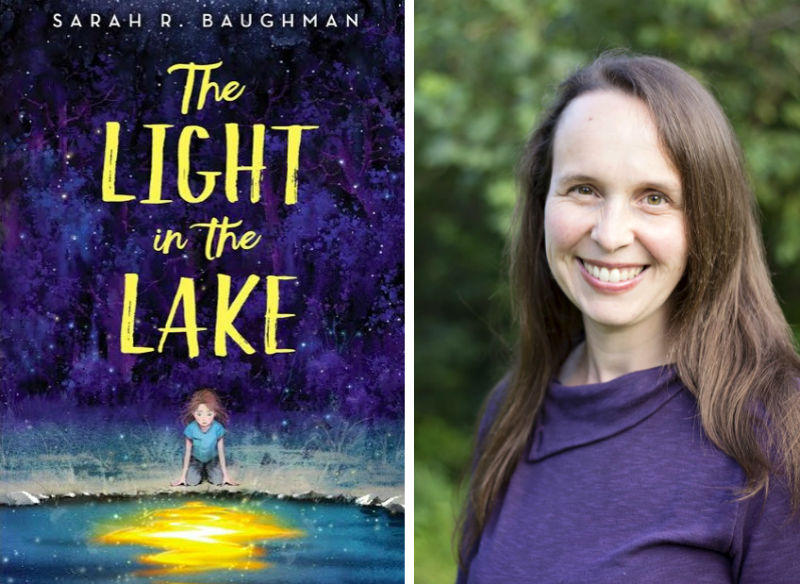 Sometimes it feels like monsters are everywhere and the world is out to get you. At times like this, we all need some magic in our lives to make it better. For 12-year-old Addie, whose twin brother Amos died recently, these truths can all be found in Maple Lake.

Addie is the protagonist in Sarah R. Baughman’s debut novel, The Light in the Lake, and she spends much of the book in the coveted role of a summertime Young Scientist studying the very lake where her brother drowned three months ago. Using a notebook that Amos left behind and with the help of her new friend Tai, Addie learns that the lake has secrets that include both those of a scientific nature (pollution) and of a more supernatural nature (a mysterious creature described by Amos as living deep inside the lake). Addie straddles the two worlds, one foot firmly in her trusted science and the other not so firmly in a magic realm that she’s not quite sure she believes in but one that might ultimately bring her closer to her late brother.

U-M grad and Michigan native Baughman says she has always been interested in the “connection between these seemingly different ways of looking at the world.” Though not a scientist by training, “I deeply value scientific knowledge and approaches to problems.”

Before becoming an author, Baughman taught secondary English, which informed the book's characters. “I’ve taught in a variety of environments,” she says. “I lived and taught in Vermont when writing Light and found myself often thinking of my students and how they interacted with the local environment. ... Conservation has always been important to me, and that particular storyline in the book grew pretty naturally out of my own interest. In Vermont, water pollution issues often popped up in the news as I was writing the book, and I paid close attention. I suppose my Michigan childhood forged a deep love of lakes because I'm always thinking about how humans can impact waterways for better or worse.”

The issues in this middle-grade book are complex enough to attract older readers, too. “As Addie finds out," Baughman says, "there is no one quick fix for water pollution, for grief, for relationships, any of it. There are many layers to explore.”

Light will interest anyone who loves the outdoors, science, a sense of magic, building and rebuilding relationships. T

“Like Addie, I love being outdoors; I hope readers are influenced enough by Addie's love for the natural world to forge connections with their own environments," Baughman says. "I often sense wildness and magic as I'm exploring the Lake Michigan dunes or Vermont mountains. I believe it's possible to hold both scientific and more fantastical perspectives, and even think they can be complementary: for example, sensing the magic or the unknown in our world strengthens our emotional connection to it, which in turn motivates us to care for it.”

Sarah R. Baughman reads from "The Light in the Lake" at Nicola’s on Saturday, September 14 at 3 pm.