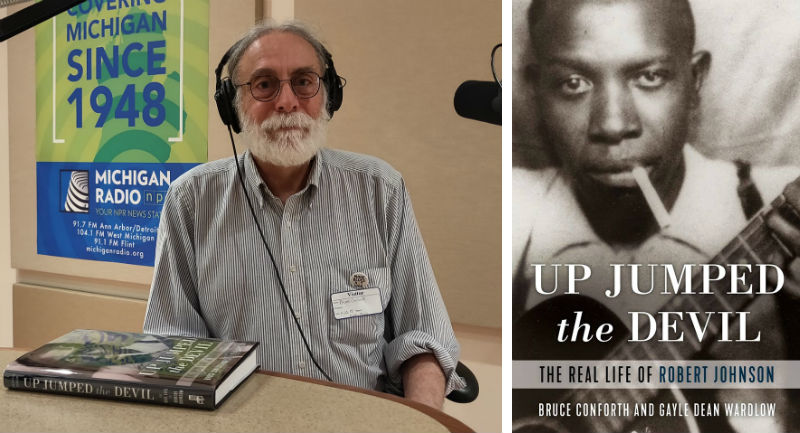 Decades of painstaking research and meticulous attention to detail have led to the 2019 book Up Jumped the Devil: The Real Life of Robert Johnson, which aims to rewrite and correct the story about the legendary bluesman. Co-authored by retired U-M professor Bruce Conforth and Gayle Dean Wardlow, this book entertains with facts, cut through myths, and lets readers learn about a man who has for too long been reduced to a single (and impossible) anecdote about trading his soul to the devil down at the crossroads in order to play the blues.

“When Columbia released its Thesaurus of Classic Jazz [in 1959], it was the first chance for most country-blues artists to have their recordings on a major label," Conforth says. "Most people didn’t even know that these folks existed. And on this record was Robert Johnson. … The liner notes said that he was the greatest blues musician there ever was, but we had nothing to compare him to and didn’t know anything about him. Almost immediately this mystique formed around Johnson while at the same time people were saying, ‘Oh, we’ll never know anything about him.’”

Conforth, who grew up in and around New York City during the 1960s folk revival, took that as a challenge.

“The blues struck a chord with me at an early age,” he says. “I listened to Skip James, Mississippi John Hurt, Son House. … I took guitar lessons from Reverend Gary Davis. … This music affected me in a deep way, especially this seemingly mythical man named Robert Johnson. An academic book was released and while it devoted six pages to Johnson, the information was either flat wrong or [it was] the author’s interpretation of Johnson’s life based on his lyrics. All the while I kept hearing people say, ‘This guy only made 29 songs, he died young, we’ll never know … it just can’t be done.'”

By the time Conforth finished his doctorate in 1990, Johnson had become “a cottage industry with every little town in Mississippi claiming that they had the real crossroads or they had found some new photograph of him. … They kept finding new ways to own a piece of this man. I felt like they were committing identify theft, taking a little piece of him at a time.”

Conforth, who is also the founding curator at Cleveland’s Rock and Roll Hall of Fame, wanted to write this book to honor the man and “give him his identity and his humanity back. I wanted people to see who Johnson really was. I look at it like some people look at climbing a mountain -- why do you do it? Because it’s there. Why research Johnson’s life? Because he’s there and I figured that he needed his life back.”

An article in Living Blues that Conforth authored drew the attention of Wardlow. “Gayle was also working on a book and said why don’t we get together and write the definitive biography of Robert Johnson?” Conforth says.

Thus began the long search into the archives for both writers -- marriage records, birth certificates, censuses, directories -- no stone was left unturned in the hunt to find out who Robert Johnson really was.

“The first piece of factual data was Johnson’s death certificate that Gayle found,” Conforth says. “We found out his mother’s maiden name, his father’s name, his date of birth, the years he was an active musician, birthplace … and this led to the inescapable truth that everything we thought we knew about Johnson was wrong.”

A classic example of this can be found in a story that Son House told many times. The legendary musician claimed that when he and Willie Brown used to play around the Robinsonville, Mississippi, area this little boy named RJ would sneak over and try to play their guitars. “House said that he didn’t really play so much as he made noise -- such noise that the audience would beg House and Brown to get back up on stage," Conforth says. "But this story simply cannot be true because Johnson didn’t get to Robinsonville until 1930 when he was 19 -- far from a little boy! And he had already been playing professionally for two years, so he could do a lot more than ‘make noise.’”

Up Jumped the Devil tells this story and many more, meticulously detailing Johnson’s life from his birth to a woman who gave him to relatives only to show up years later to claim him to his early marriage and the tragic death of his young wife to his “rambling” years where Johnson would walk from place to place, playing his guitar to his untimely death at the age of 27.

“Johnson grew up in very different circumstances than people think,” Conforth says. “He was training to be a tradesperson before his mother returned and took him to a cotton farm where he most definitely did not want to be.”

And what about that famous story about the crossroads?

“After the death of his first wife, Johnson met Isiah ‘Ike’ Zimmerman who took him in to live with his family. Zimmerman said you had to go out to the gravestones at midnight so that the haints [ghosts] could come out and teach you the blues, so that’s what he and Johnson would do -- go to the cemetery and play," Conforth says. "Zimmerman taught Johnson the real blues -- put the icing on the cake of his musical years up until that point. Johnson stayed with Zimmerman for about eight months and then went out to show Son House what he could do. He sits down on House’s stage and blows them all away. It’s that rapidity in which he got so great that accounts for the beginnings of the stories that he must have sold his soul.”

Conforth wants readers to understand that Johnson is more than this fairy tale -- that “he was a real human being, that he is not a myth. While there may be myths about him, he himself is not a myth. Johnson was a real person who loved, hated, had desires and needs, just like all of us. ... Johnson’s life is the perfect metaphor for the hero’s journey. He overcomes these phenomenal adversities and then becomes famous and it’s attributed to some supernatural powers. This man’s life mirrors the human condition and in that way, Johnson lives in us all.”