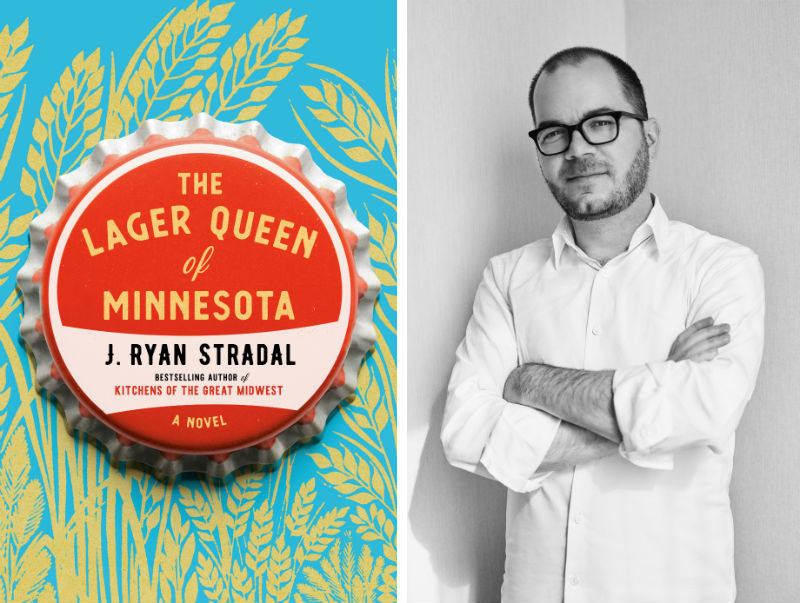 Beer and pie remain constant for characters through rifts, tragedies, and changes in J. Ryan Stradal’s new book, The Lager Queen of Minnesota. The novel follows two sisters, Helen and Edith, as they come of age and make lives for themselves. Yet their paths diverge when Helen taps their father for all the money from the sale of the family farm, which divides the family. Edith becomes known for her pies, hops between service industry jobs, and endures several major losses, all while bottling her feelings about the uneven inheritance. Helen pores over chemistry and learns to make beer in college, and then she grows a large, successful brewery with the help of the farm proceeds. When Edith’s granddaughter, Diana, inadvertently enters the beer business, their paths head toward each other again.

Chapters in this plot-driven yet poignant novel alternate the focus between characters and are titled by various sums of money exchanged within them. The backstory and present lives of the three female main characters are blended throughout the chapters as Diana’s story parallels Helen’s in some ways. It is not only about what is happening or has happened, though. The novel also lingers on nostalgic or emotional moments. When Edith loses her husband, Stanley, the narrator describes that:

Her grief was a forest with no trails, and she couldn’t guess how long her heart would walk through it, as her body walked other places. For half a century, she had seen or spoken with this man almost every day, so his life didn’t end when he died; it found its way into cereal aisles and intersections and post office lines and conversations she didn’t intend.

It’s clear that Edith cares deeply about those around her even as she struggles to get by.

The characters don’t succumb to bitterness despite challenges to support themselves, and they celebrate their successes in an industry that fluctuates based on consumers’ preferences. Beer aficionados and foodies might appreciate the well-crafted descriptions of brewing methods and tasting notes. One passage describes “Grandma Edith’s Rhubarb-Pie-In-A-Bottle” ale as such:

The beer has a fluffy pink two-finger head and smells like malty rhubarb, so it’s certainly not out to fool anybody. ... This beer is flawed, wonderful, and strange in a way only a certain individual could devise, and it renders every other beer on the shelf a faceless SKU.

This review of her beer illustrates Edith’s and other characters’ work ethics and distinct Midwestern traits.

Stradal has first-hand knowledge of the setting, as he grew up in Minnesota. He now lives in Los Angeles and is a contributing editor at TASTE, an online magazine about food and cooking. His first novel is Kitchens of the Great Midwest. He reads at Literati Bookstore on Tuesday, September 24, at 7 pm, and I interviewed him ahead of time.

Q: Tell us about how you became a food writer.
A: I’ve been preoccupied with food since I was a kid. I wasn’t raised in an environment of culinary diversity, so until I had access to a car, it was something I had to explore with my imagination, and I think that stuck. I love writing about food. It feels like home base to me.

Q: As a contributing editor at TASTE, what qualities do you look for in food writing? Who are your favorite food writers?
A: I look for something I haven’t seen before, especially as it relates to how our relationship with food is emotionally or sensually described. I have too many favorite food writers to list here, but I love the way Ben Katchor tackles food in his work. My favorite recent “food” book is The Cook by Maylis de Kerangal.

Q: What did you learn about beer, in order to write The Lager Queen of Minnesota?
A: Wow -- pretty much everything. Before writing The Lager Queen, I knew that ale and lager were different, but I couldn’t have told you why. I give a lot of credit to the brewers I met who were incredibly patient with my lack of knowledge.

Q: How did you go about learning about brewing beer?
A: I visited over three dozen breweries to research this novel, starting in the spring of 2015, and had to continue consulting brewers for information all the way through my final editing process as I was troubleshooting certain plot points. For instance, I didn’t believe that my character Linda Arquillos was likely to make an ideal chocolate stout on her first attempt brewing beer, so I had to ask a brewer during the summer of 2018, as I was finishing that scene, what a beginner’s mistake with that variety of stout may be -- and work it into the story. Also, at the recommendation of certain brewmasters, I added books to my library that became constant sources of reference. They included Tasting Beer by Randy Mosher; Land of Amber Waters: The History of Brewing in Minnesota by Doug Hoverson; Ambitious Brew: The Story of American Beer by Maureen Ogle; and The Beer Bible by Jeff Alworth.

Q: In this novel, you include elegant descriptions of beer that make it easy to imagine what they might taste like, such as, “The right IPA is like a Miles Davis trumpet solo. Consistent, yet surprising. Both obeying and breaking the rules. A mixture of simple things. Air. Water. Time. Heat. Add either trumpet or malt, hops, and yeast.” Why did you center this book around beer in contrast to, say, apples or cheese, which are also prominent in the Midwest?
A: There are a number of reasons -- I can’t think of a particular realm of food/beverage that’s evolved more in the last 15 years than beer, particularly in the Midwest. The Midwest also has such a robust beer history -- and present -- that it coincided perfectly with the characters and setting I wanted to write about.

Q: The Lager Queen of Minnesota tells parallel stories of women in beer, and the characters are very determined women in their own ways. Early on, one observation, among many, reveals a character: “Helen knew right then that her aspirations would have a mortal enemy, right there under the same roof. She couldn’t ever trust her mother with her honest desires again, and would regret it the few times she did.” How did you approach writing such strong, clear characters?
A: The characters emerge fully formed in my head; I feel like I just take dictation from them. Of course, as their author, I try to challenge them and make their lives more difficult to reveal the deeper content of their hearts and heads, but for the most part, these people are pretty stubbornly who they are. I do my best to force them to surprise me.

Q: In the novel, the two sisters, Edith and Helen, become divided early on. What inspired this conflict?
A: I come from a family of farmers on both sides, and there’s been divisions of assets and property on each side over the years that have been regarded as unfair by some. Forgive me for being overly diplomatic, but in some cases, the wounds are still fresh.

Q: Edith and her family members, including granddaughter Diana, often scramble to make ends meet, and they also have or develop a strong work ethic. Their working-class struggles contrast Helen’s success with her brewery. What interested you in writing about these challenges?
A: I just wasn’t seeing these kinds of challenges written about often as central to characters and their conflicts. Many of the people I knew growing up were living paycheck to paycheck, or were one accident or unfortunate circumstance from great compromise -- my own family included, for much of my childhood. It would’ve meant a lot to me as a young reader to see that represented in contemporary fiction, and I’d always promised myself I wouldn’t forget that. I come from a family of farmers, truck drivers, and nurses and feel both lucky to be a writer and obligated to share my family’s stories as gratitude for their love and support.

Q: What draws you to the setting of the Midwest for your books? How has your perspective on Minnesota and the Midwest changed, or not changed, now that you live in Los Angeles?
A: I love the Midwest, and it presented no shortage of puzzles, complexities, and contradictions to me while I was growing up that I’m still unpacking. It’s a place whose richness and depth are both incredible and not often easily accessed.

Q: What are you writing next?
A: Another family novel set in the Midwest. A significant setting is a supper club. I love the characters I’m writing, and I miss them every day I don’t get to spend time with them. That’s all I’ll say for now.

J. Ryan Stradal reads and discusses his new book, "The Lager Queen of Minnesota," at Literati Bookstore on Tuesday, September 24, at 7 pm.