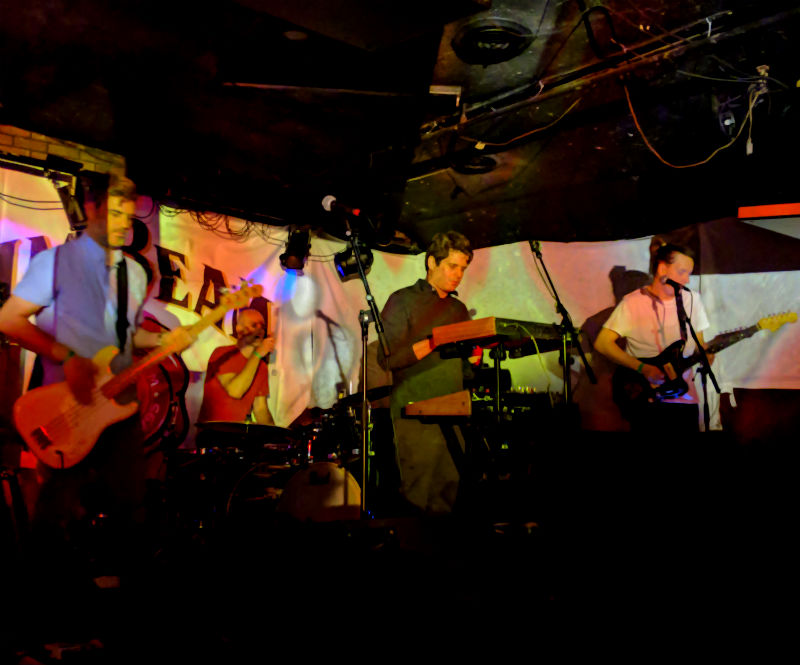 Hydropark at Fuzzfest 2018 at The Blind Pig. Photo by Christopher Porter.

Hydropark's second album, Circuit 2, works like one of those vintage British or Italian library-music albums that feature short songs written to set moods in films and TV shows -- tunes with titles like "Creepy Street," "Misty Canyon," and "Blue Veils and Golden Sands."

Those compositions weren't concerned with key-changing bridges or clean denouements. They parachuted people into the middle of a groove and then extracted them before the mood was exhausted.

"The majority of both our [self-titled] first album and Circuit 2 is loosely structured jams, first takes, experiments, or songs we liked but weren't stylistically consistent with each other," said Hydropark guitarist Fred Thomas, who is joined in the band by drummer Chad Pratt, keyboardist Chuck Sipperley, and bassist Jason Lymangrover. "We looked to J Dilla's beat tapes as inspiration for this record. Collections of fragments and the best parts taken from longer recordings that switch to the next song at the first signs of boredom or disinterest."

Even if the working methods between 2016's Hydropark LP and Circuit 2 are similar -- and both would make excellent cinematic soundtracks -- the musical inspirations that define each album feel different. If the new LP's touchstone is J Dilla, the previous record appeared to be Neu!, the German space-rock band that could ride a single riff for 10 minutes or more without breaking a Teutonic sweat. The longest song on Circuit 2, "Pole-Ex," is just under four minutes; the shortest is "Plateau" at 29 seconds. Throw out those high and low numbers and the arithmetic mean for Circuit 2 song lengths is one minute, 56 seconds -- barely enough time to gas up the Volkswagen and hop on the Autobahn.

But there was no great plan to change stylistic directions with Circuit 2, which is also more chunky and funky than Hydropark's more linear and hypnotic debut.

"Hydropark is sort of a learn-as-you-go band," Thomas said. "It took us completing a bunch of songs with singing to realize we wanted to stay an instrumental band. Similarly, it took us jamming for three years to get it out of our system and be able to focus on a more completely arranged album, which is what we're doing now. ... A good amount of what makes up Circuit 2 is the wide variance of jams in different states of completion from dozens of recording sessions in this three year period."

The singing songs Thomas referenced were released on (EP1) in 2018 and those new-wavey tunes plus the four instrumental tracks on 2019's (EP2) came from an aborted second LP. The band didn't feel like it held together as an album, so the tunes were separated onto EPs. Circuit 2's "Waterlogged" and "Against All Odds" are also from those sessions, which were recorded in fall 2016 in Chicago with Erik Hall (In Tall Buildings) and Elliot Bergman (Wild Belle, Nomo). 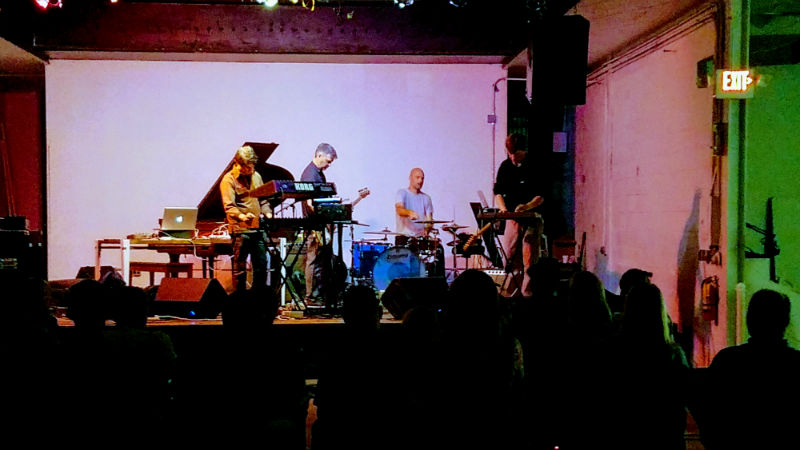 Some songs on Circuit 2, such as "Waterlogged," evoke Hydropark's aggressive early material -- albeit in a better-recorded form -- when the band would just jam hard and loud for minutes on end. But those assailments have been honed and sharpened on Circuit 2, which is befitting the scary soundtracks that helped inform the record.

"Horror soundtracks by Goblin, John Carpenter, and the like are pretty common reference points for modern synth music," Thomas said, "since those were some of the most interesting commercial applications of rudimentary synthesizer sounds in pop culture. The cheap-sounding synths of '80s horror movies add a whole other layer of weirdness and grime to those films and it's a fascination for us, musically. [Circuit 2's] 'Waterlogged' is a standout, but 'Dead-Zoned' and to a more ambient degree 'Slither' both fall into that categorization. We had a few working titles for other songs like 'Bootleg Ghostbusters.' Don't even get me started on the long-awaited Nite Bight original motion picture soundtrack."

When asked to go ahead and, in fact, get started on the Nite Bight original motion picture soundtrack and describe what it is, Thomas said, "An entire soundtrack album for an imaginary film styled after the most exaggerated parts of '80s horror films. It has been in the works forever and will most likely never materialize. ... [J]ust one of our many hairbrained tangents."

But wild tangents -- whether brainy or hairbrained -- are what give Hydropark its widescreen essence and Circuit 2 is the perfect soundtrack for wherever your cinematic mind may roam.