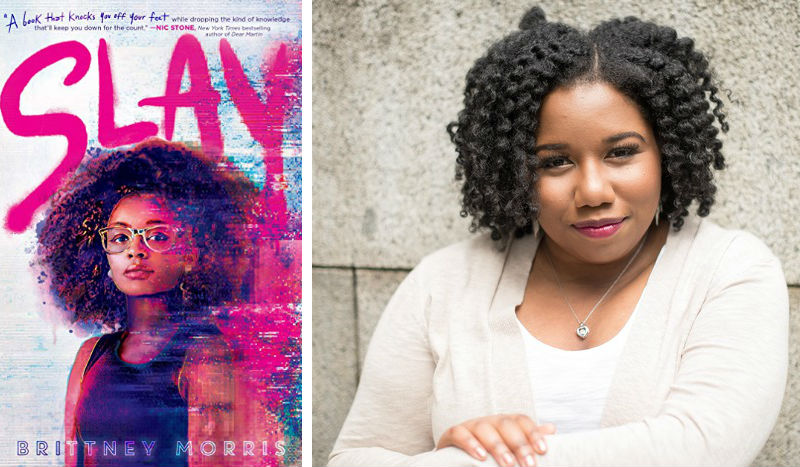 A lot can happen in 11 days. One of the original Apollo missions could have gone to the moon and back. The Pony Express could have delivered one piece of mail from Missouri to California. A turtle can walk from New York to Ohio. And the most anticipated YA novel of the fall can be written!

“After I saw the movie, I was hoping someone would make a Wakanda simulator video game," Morris says, "because I immediately wanted to go back to Wakanda, and then I got to thinking about how controversial an all-Nubian VR MMO would be. I realized how much responsibility would be on the shoulders of someone managing such a game. And thus, the idea for Slay was born.”

In the book, protagonist Kiera Johnson develops a video game based on Black Panther. No one -- not even her friends or boyfriend -- knows she is the person behind the successful game, which sees thousands of online players dueling as Nubian personas. It’s a world where Kiera can be herself and speak her truth. But when a teenager is killed following a dispute in the game, the mainstream media labels Slay as a negative space full of “thugs and criminals.” An anonymous racist troll enters the world Kiera created and threatens her safety and peace of mind by threatening to sue her for “anti-white discrimination.”

In this online world, Kiera creates a safe space for African-American gamers who gather online to play the role-playing card game. Morris says she created the book and the game at the same time. “Before drafting, I always create a one-page planning sheet -- no longer, no shorter. It always has a list of primary, secondary, and tertiary characters, a bulleted list of scenes, and for Slay, a list of duel cards. Everything else about Slay -- the arenas, the gameplay, and the items -- was pretty much written off the cuff.”

Morris shares that the many gaming references in the book are from video games millennials grew up with but “there are also lots of huge questions explored through gaming that might appeal to adults. Black history and culture is taught via duel cards, which I haven’t seen before.”

Because the book will resonate with many high school students, the publisher put out a teacher guide for Slay that “covers so many topics,” Morris says. “I hope this book sparks questions about racial identity, safe spaces, and video games being used as an educational medium.”

The book was written so quickly and so successfully that Morris says she didn’t have time to be surprised by much while drafting, but she says, “I didn’t realize what the end of the book would look like for a major character until right before the twist -- and that’s all I’ll say.”

Brittney Morris reads from "Slay" at Nicola’s on Monday, September 30 at 7 pm.