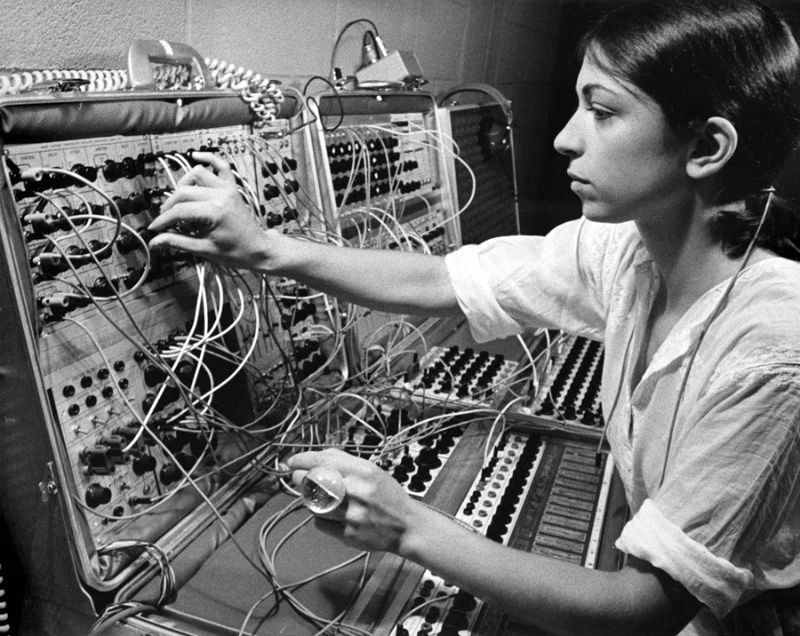 You can debate who the best guitarist is all day and still not carve out a consensus. Braaap all you want about who's the finest trumpeter and the winner's horn will never sound. Argue about pianists and you'll be talking in circles about tickling the ivories even though a title-holder will never be crowned.

But the undisputed master of the Buchla synthesizer is Suzanne Ciani.

Might as well cue Jadakiss' "The Champ Is Here."

It's Ciani by knockout.

The 73-year-old champ is bringing her Buchla to Ann Arbor for a master class (2 pm) and a performance (8 pm) on Saturday, October 5 as part of the Resonance festival, an annual one-day event that celebrates women and non-binary artists in music technology, sponsored by the Performing Arts Technology department at the University of Michigan. Ciani will work in Hankinson Rehearsal Hall -- limited seating, get there early because both events are free -- and perform her Buchla compositions in quadrophonic sound with accompanying visuals.

If you're unfamiliar with Ciani, here's a crash course in her music and the synthesizer she mastered.

A classically trained pianist, Ciani swapped her keyboard for knobs and wires once she met synth inventor Don Buchla while she was a late '60s music-composition grad student at the University of California, Berkeley. Buchla and Robert Moog were pioneering synthesizer designers working at the same time on opposite coasts, but there was a prime difference in their approach to the instruments: Moog kept a piano-style keyboard as part of his design and Buchla forwent it completely.

By eliminating the keyboard, Buchla's modular synth relied on voltage control, pressure-sensitive pads, knobs, and wires to change pitch, timbre, amplitude, and -- perhaps most important -- the spacial location of the sounds. Using this technology, Ciani saw a new way to compose music. Rather than rely on Western notions of melody, harmony, and rhythm, Ciani heard music as movement, as something that flowed like a bending river or an ocean tide. This is why she prefers performing in quadrophonic settings -- that way the music can swirl and ping-pong around listeners' heads, enveloping their ears in immersive sound.

Ciani spent much of her professional career writing advertising jingles and providing sound effects for movies -- and also a pinball machine. She even went on David Letterman's brief daytime talkshow in 1980 to demonstrate how she created sound effects with her synths.

The financial security of her commercial career allowed her to continue experimenting with her Buchla compositions, which weren't fully appreciated throughout the '70s and '80s. For her 1986 album The Velocity of Love, Ciani returned to the piano, which she mixed with synth sounds. It was a New Age hit -- far from the hypnotic swirls of her Buchla work -- and she continued working in this vein throughout the 1990s and 2000s. But as modular synths became more affordable and more common over the past 10 years, Ciani's Buchla music became sought after by modern audiences and she became more widely known as one of early synth music's pioneering artists. The 2017 documentary A Life in Waves traces Ciani's journey.

In recent years, Finders Keepers Records has released or reissued several Ciani albums and EPs, including her never-issued 1969 interpretation of Charles Baudelaire's Flowers of Evil and Buchla Concerts 1975, as well as her 1980 soundtrack LP for the stageplay Help, Help, The Globolinks! Ciani has also released new music, including 2016's Sunergy with Kaitlyn Aurelia Smith and 2018's LIVE Quadraphonic (which you can download here for free).

Ciani is an engaging interview, too, full of insights on what makes the Buchla special to her -- she loved the visual feedback she got from the instrument with all its blinking lights -- and how she hears music as a neverending flow-state. Here are some Ciani chats worth consuming before you're submerged in sound at her Ann Arbor performance:

Suzanne Ciani will present a master class (2 pm) and a performance (8 pm) on Saturday, October 5 as part of the Resonance festival, at the University of Michigan's Hankinson Rehearsal Hall, 1100 Baits Dr, Ann Arbor. Both events are free but it's recommended to arrive early as seating is limited.