All the Town's a Stage: Ann Arbor Civic Theatre celebrates its 90th anniversary 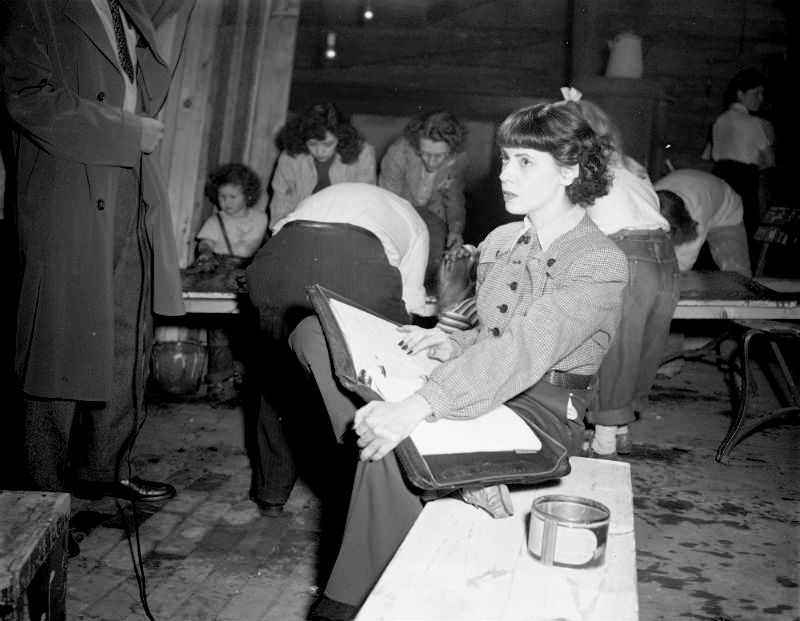 On Broadway in 1929, the Marx Brothers had them rolling in the aisles with Animal Crackers, Louis Armstrong was singing and playing a driving trumpet in “Hot Chocolates,” William Gillette was back for another turn at Sherlock Holmes, and Cole Porter had his first big hit with “Fifty Million Frenchmen.”

In Ann Arbor, a group with a passion for theater started a private club that began meeting to study and perform script readings. That passion is still glowing as the club that became the Ann Arbor Civic Theatre celebrates its 90th anniversary.

“That was sort of an outlet for people who wanted to get involved in theater but weren’t part of the university, because there wasn’t a community outlet at that time,” said Alexandra Berneis, Civic Theatre executive director. “They met at homes and in basements and things like that. They read plays, thinking about what they would do about creating an artistic outlet for people.” 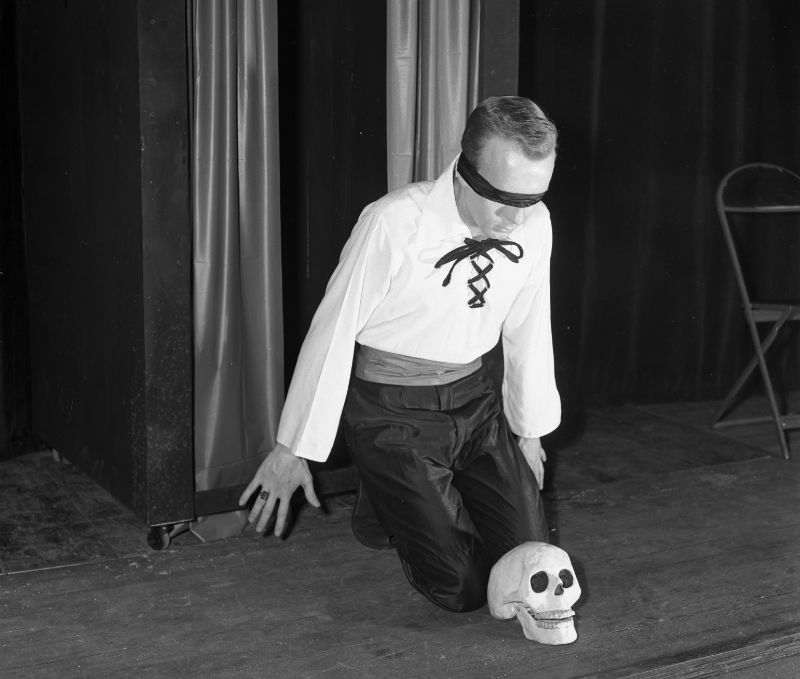 The Ann Arbor Civic Theatre's production of The Spider at the Lydia Mendelssohn. Cast member Carl Conrad goes through one small phase of the mystery-shrouded murder melodrama at a dress rehearsal. Published in The Ann Arbor News, January 21, 1952. Photo donated by © The Ann Arbor News.

The informal meetings and casual readings eventually blossomed into a producing theater in 1935 with a production of Sidney Howard’s The Late Christopher Bean. The club opened its membership to the general public, though it already had attracted a membership of well over 100.

“It was a popular thing even from the beginning,” said Berneis.

For a concise history of the group by local historian Grace Shackman and extensive archival material on press coverage, photos, programs, and posters, see aadl.org/a2ct.

The theater will celebrate its 90th anniversary with a gala Friday, Nov. 1, at The Polo Fields Golf and Country Club. Nine people who have had a major impact on the theater will be honored. Tickets and more information about the gala, are available at a2ct.org/gala.

The theater is also planning to survey the community to find out what they want to see in their community theater. 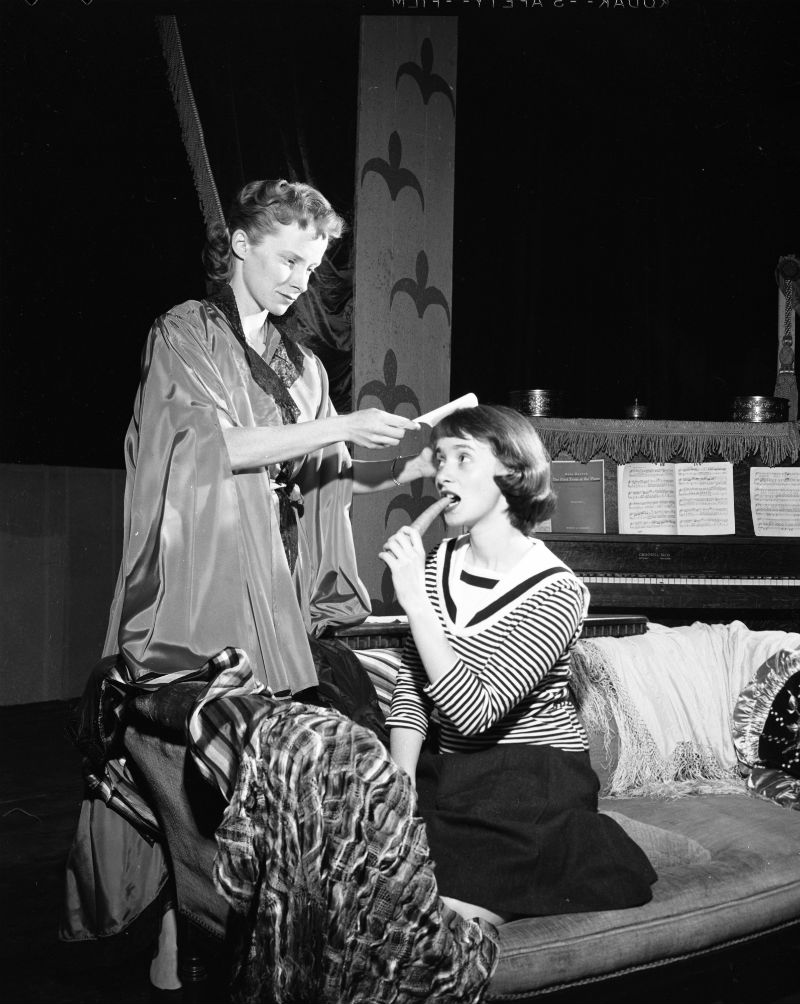 The Civic Theater has gone from script readings in living rooms and basements to a full schedule of events and activities. 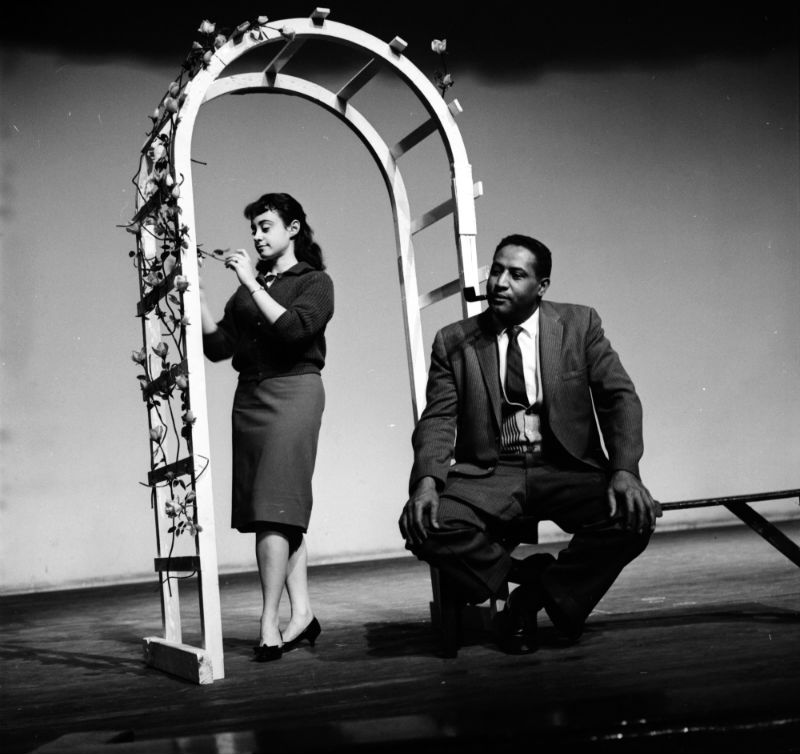 Thornton Wilder's Our Town presented at Lydia Mendelssohn Theater by the Ann Arbor Civic Theatre. Rehearsing their roles in the production are Miss Royce Rosenberg (left), who plays Emily Webb, and Singer Buchanan who portrays the Stage Manager. Published in The Ann Arbor News, March 28, 1961. Photo donated by © The Ann Arbor News.

The Civic presents its productions at two University of Michigan theaters, the Arthur Miller Theatre on the U-M North Campus and the Lydia Mendelssohn at the Michigan League on the U-M Main Campus. The Civic’s office, rehearsal space, and small studio theater are in downtown Ann Arbor at 322 W. Ann St.

“The university has been good to us, giving us the best spot available in the time slots,” said Berneis. “And we’d like to run longer; we only run one weekend except for our inhouse studio shows. And we’d love to be somewhere where we could run multiple weekends. We feel we miss out when people want to see it but they’re out of town. But the theaters themselves are wonderful.” 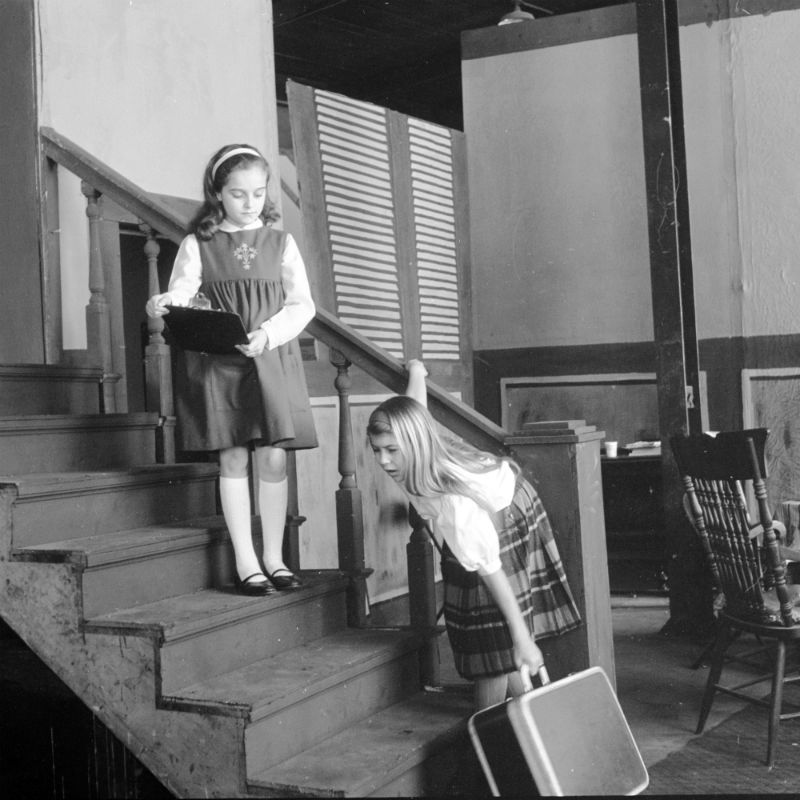 Nine-year-old Rosemary Feit, on the stairs, watches 10-year-old Molly Marie Rae practice a scene from the Civic Theatre production of The Miracle Worker. Both played young Helen Keller in the show. Published in The Ann Arbor News, March 16, 1964. Photo donated by © The Ann Arbor News.

“We put out a call in the fall for directors interested in directing a production and they come with a list of plays they want to do,” Berneis said. “They can submit up to three titles in that initial submission and then we have a committee made up of myself, members, people in the community who go through reviews and kind of survey our audience to find out what people want to have and whittle that down to something more manageable.”

From there directors come in and give their vision for their proposed production and scenic, costume, and prop design specifications. The committee then makes a final decision. 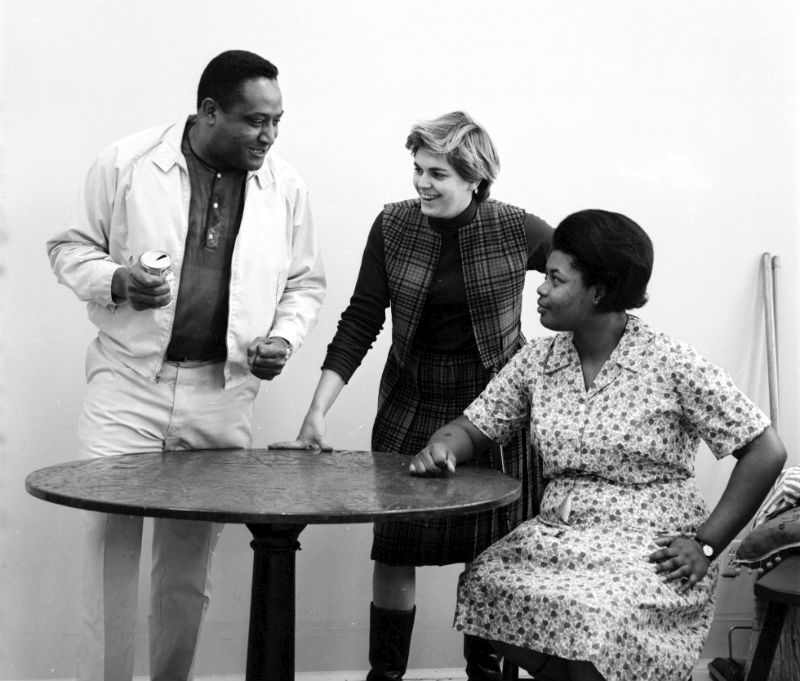 Singer "Bucky" Buchanan (left) crushes a beer can in one hand in preparation for his role of Walter Lee Younger in Raisin in the Sun. Watching the feat are director Priscilla Travis (center) and Julia Moore, who plays the mother. Published in The Ann Arbor News, January 2, 1967. Photo donated by © The Ann Arbor News.

There are things that the budget and theater space won’t allow.

“We have mixed feelings on something like Titanic where we’d have to build the better part of a ship. That’s something we’d have to assemble fully as it’s being built, assemble and disassemble it. If it involves flying, we don’t do that, but we’re considering options on how to do it,” Berneis said.

She said the group has staged Peter Pan but without flying. People have suggested doing shows like Mary Poppins where flying is important.

Over the years, Civic has developed a large audience, which returns year after year. Though the theater does not have a standing company, it does have a family of directors, actors, and technical volunteers who also return year after year to bring live theater to Ann Arbor.

Through the years several performers have won critical acclaim for their performances and some have gone on to win fame in professional theater. Gilda Radner was a student at U-M when she appeared at Civic in She Stoops to Conquer. Composer Andrew Lippa who wrote the music for the Broadway shows The Addams Family and Big Fish got his start at Civic and many others have gone on to perform in Broadway shows. 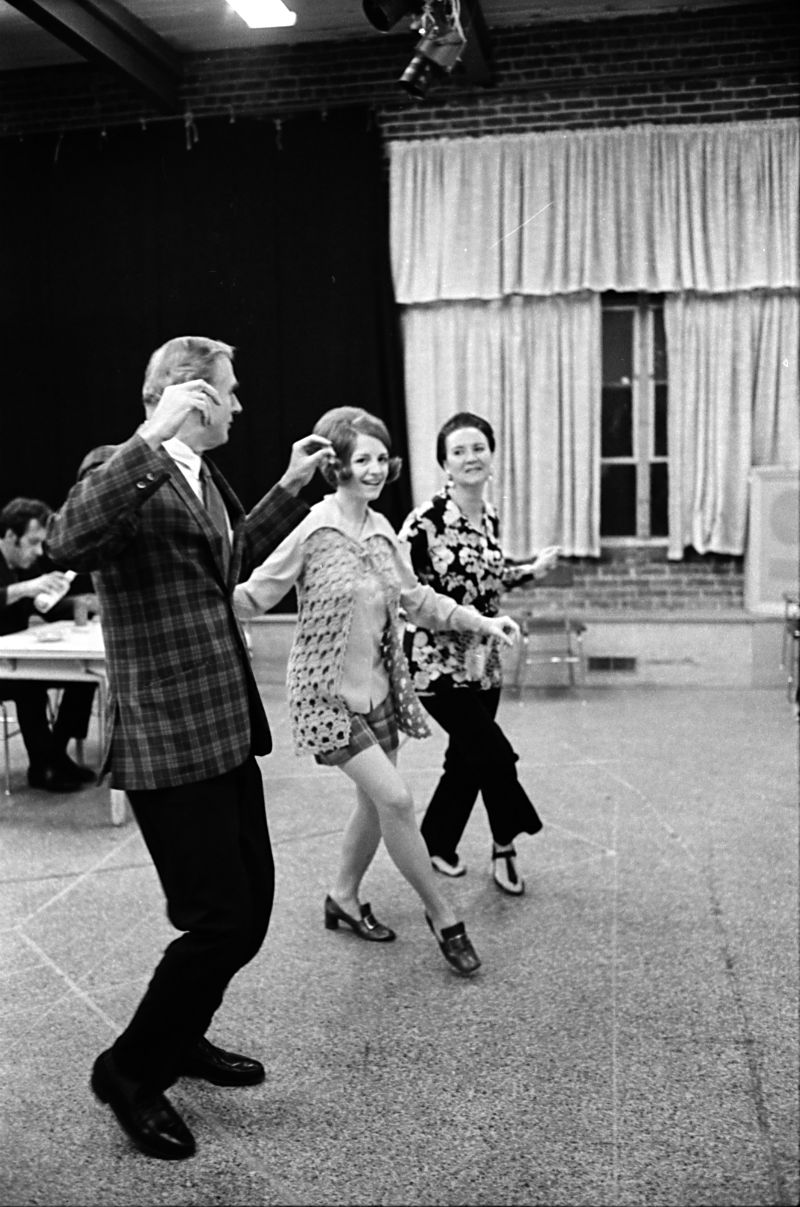 Berneis was in middle school when she got her first taste of theater at Civic.

“My mom was doing Bye, Bye Birdie and I wanted to tag along and be in the theater,” she said. “I was 13 and running the side board. I needed a little training, it was scary. I’ve been involved since then. I went to college out of state and when I came back, it was the perfect place to get my feet back in.”

Berneis said the Civic has also been a good place for romance.

“My husband and I met while doing The Scarlet Pimpernel in 2003,” she said. “It’s intense to work on stage with someone and sometimes it fizzles after the show. But we have a better record than most. My sister met her husband here. We’ve had a couple dozen couples who have gotten together.” 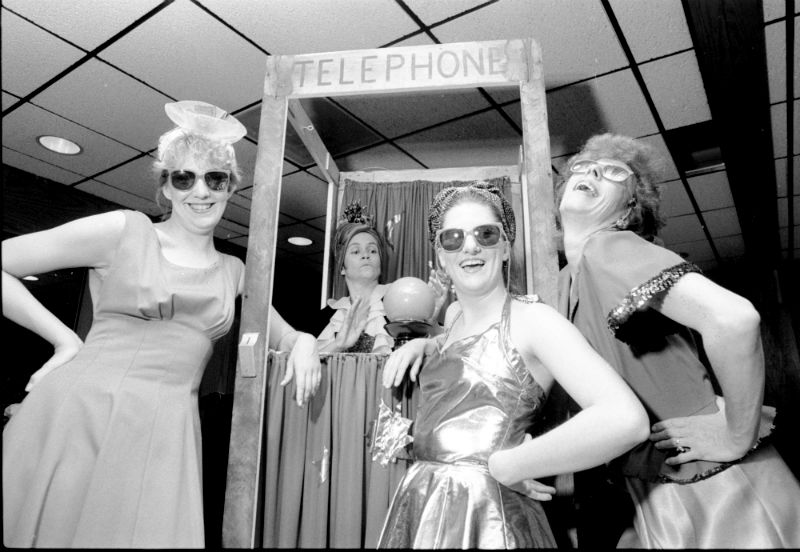 From Left: Christina Parker, Sarah Salisbury, Chris Hall, and Marilyn Kennedy in a scene the second act of The Skin of Our Teeth. Published in The Ann Arbor News, June 12, 1986. Photo donated by © The Ann Arbor News.

Ron Baumanis has been directing shows at Civic since he moved to Ann Arbor in 1995.

“AACT has always been a fun community theater that functioned on a much higher level when it comes to productions -- partly because of the excellent creative team, but also because of the wealth of talent that has performed, directed, and worked with the theater,” Baumanis said.

Baumanis served on the Civic board of directors, including several years as board president. He is now living in central Florida, which, he said, has nothing to compare with Civic.

Recent productions directed by Baumanis are Heathers, The Mystery of Edwin Drood, The Wedding Singer, and Bonnie & Clyde.

“It’s very typical of Ann Arbor in general -- incredibly talented people in all walks of vocational life, who share this interest in theater and theater arts and come together to create amazing work," Baumanis said. "Doctors, teachers, psychologists, lawyers, politicians, medical personnel, administrators, radio and media personnel by day and artists by night. Ask any Ann Arborite what they do and they will give you two answers: their day job and their avocation, passion. We’re lucky to have so many people passionate about theater here.”

Cassie Mann’s first experience with Civic was in 1976, shortly after graduating from high school. She played Nurse Kelly in a production of Harvey.

“I’ve acted and directed many shows over the years. Some of my favorites shows as an actor are Maggie in Cat on a Hot Tin Roof, Bunny in House of Blue Leaves, and all the female roles in Jeffrey,” she said. “Some of my favorite plays I directed are Diary of Anne Frank, Dinner With Friends, Moonglow, and, most recently Vanya and Sonya and Masha and Spike.” 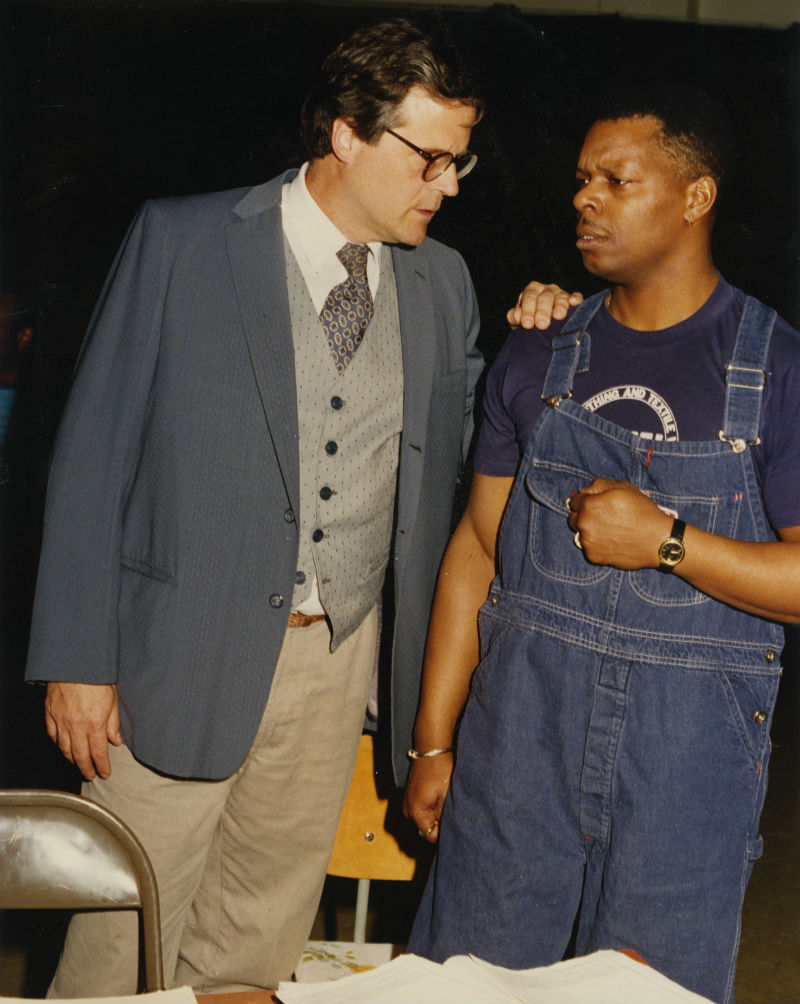 In 1995, Baumanis directed the Paul Rudnick AIDS-related comedy Jeffrey when he stepped in to fill the spot of a Civic director who died of AIDS while preparing another production. Mann was in that cast and was inspired by the power of theater to deal with social issues.

“It was a great honor to our fallen friend to bring the issue to our audiences,” she said. “In 2013, I directed Moonglow, a play by Michigan playwright Kim Carney. It’s a terrific script about the devastating toll of Alzheimer’s. I was blown away when Nancy Heusel auditioned for the play. She is a legendary actress in Ann Arbor, and I was pretty intimidated. She ended up being so kind and thoughtful and hardworking, and was very respectful to me as a director.”

Mann said that Civic productions are always a mix of veterans and newcomers and that the opportunity for community members to become involved is one of the great strengths of Civic.

“Participants come from all walks of life and from all segments of the community, and many people have found lifelong friends and spouses -- myself included -- at Civic,” she said. “The audiences who attend A2CT get to experience really good theater at an affordable price, with the bonus of occasionally seeing their co-workers, family members, and even their dentists and doctors onstage.”