Eileen Pollack's "The Professor of Immortality" novel explores science, tech, grief, motherhood, whether we can truly know another person -- and the Unabomber's time in Ann Arbor 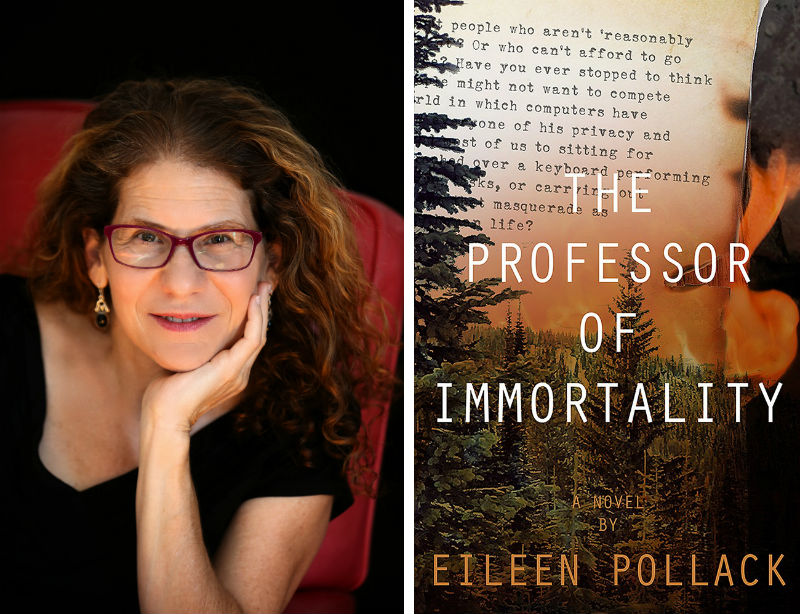 The Professor of Immortality by Eileen Pollack is preoccupied with how well people can know each other and how they deal with flaws and surprises in relationships when they care about the other person. The book raises questions about whether it is better to be together despite challenges and what the costs are either way. The ending seems to point strongly to an answer yet still lets the reader wrestle with this matter.

Main character Professor Maxine Sayers has an energizing job, loving husband, quirky child, and comfortable home -- until she doesn’t. Her husband dies unexpectedly, and then she experiences issues with her existing family members as her son becomes inaccessible and her mother’s health deteriorates. Through all of these changes and problems, the novel delves into Maxine’s thoughts and feelings about the goings-on. She must contend with whether what she believed and worked for is right and if it is what she still wants.

As Maxine takes action to figure out is transpiring with her son and a former student, she reflects deeply on her life and connections to people. At one point while talking with a friend and colleague, Rosa, Maxine wonders how to cope with her concerns, and she experiences some relief from Rosa:

[Rosa] settles beside Maxine and rubs her back until Maxine is crying in her arms. That’s all anyone wants, isn’t it? To be held? Isn’t that the best Terror Management System any of us has devised?

This passage feels poignant in and of itself and becomes even more weighty with the fact that the book draws inspiration from Ted Kaczynski, the Unabomber. Another character, Angelina, provides further insight, noting that for many, “‘…their troubles are because of what is missing in their lives. And there is no way you could make up for that.’” These insights buoy Maxine when she faces what she fears is true and makes difficult decisions as a mother.

Pollack previously directed the MFA Program in Creative Writing at the University of Michigan (U-M), and she has written numerous books, including the recent novel, The Bible of Dirty Jokes. Now she lives in New York City. Ann Arbor welcomes her back Friday, October 11, at 7 pm at Literati Bookstore, where she’ll be in conversation with author Natalie Bakopoulos. I asked her some questions beforehand.

Q: The Professor of Immortality is set in Ann Arbor, where you lived for years while working at U-M, and many places in the book are recognizable around town. What is it like to write fiction about a place that you are very familiar with?
A: Setting is crucial to me -- I can’t write a scene unless I can see, hear, feel, taste, and smell what my characters are seeing, hearing, feeling, tasting, and smelling. To me, setting is the world, the culture, that shapes the characters. Who are the insiders? Who are the outsiders? How can you tell who is who? How do people in a certain culture dress, speak, eat, think, joke around, amuse themselves? What is important to them that might not be important to other people? At one level, that means knowing that Michiganders say “pop,” not “soda,” and that female undergraduates who come from a small town in the Thumb dress differently from wealthier classmates who belong to a sorority. At another level, I enjoyed getting my fictional students, all of whom come from very different cultures, discussing the effects that immortality might have on religion, art, family life, etc.

The first time I set a novel in Michigan (when I wrote Breaking and Entering), I was fascinated by the way people from the far left and the far right (and everything in between) were trying to get along in one state, sometimes in one small town, and think of themselves as Michiganders and Americans. This time, I am more interested in the university setting, where everyone professes to be interested in educating young people and discovering new knowledge, even though not everyone actually puts those endeavors at the top of their priorities. Maxine used to care about her students. She was deeply curious about the effects of technology on our lives. But then her husband died, and her son went missing, and she seemed to lose her way. The character based on Ted Kaczynski might, in a better world, have cared about studying mathematics and trying to educate his students about the effects of technology and industrialization on human life, but he was so lonely, so cut off from other human beings, that he dissolved into his own pain and rage and became a terrorist.

I’ve spent 25 years living in Ann Arbor (and three years earlier in my life living in Iowa City and Chicago). I have lived far longer in the Midwest than I ever did in New York (not to mention that I grew up in a rural town of 5,000 people in upstate New York). But I know that many Michiganders still think of me as a New Yorker and maybe expect me to be critical of their state. The opposite is true, I think. I love a great deal about the Midwest, and I try to be as generous as possible to all my characters. I tried to get everything about Ann Arbor and Michigan right. Some of the details are invented, but the fiction is embedded in a realistic setting.

That said, I’m terribly embarrassed because when Maxine leaves Ann Arbor and drives to the U.P., she says she has driven over the Mackinac Bridge … then wonders if she should stop at Gaylord for coffee. Believe me, I know that Gaylord is south of the bridge! I fiddled with that chapter so much, moving around paragraphs, that in the end I overlooked that one error. I promise to fix it before the paperback edition comes out!

Q: Has your move to New York City influenced your writing? How does it contrast life in Ann Arbor?
A: New York is more expensive and more exhausting! I miss how easy my life was in Ann Arbor. But I have to admit that the characters wandering around the streets of NYC are more colorful. Ann Arbor used to have Shakey Jake … but in NYC, there’s a Shakey Jake on every block. And people here talk in more colorful ways, in a wider variety of voices. Living in Michigan gave me plenty of interesting material, but living in NYC makes me pull out my notebook at least once a day to jot down crazy lines of dialogue and very strange stuff that happens in the subway or on the street.

Q: So what inspired you to base a novel off of the Unabomber?
A: I had just moved to Michigan a few months before the Unabomber’s manifesto was published in The New York Times. After Ted Kaczynski’s brother recognized the language and ideas and turned Ted in to the FBI, everyone realized that Ted had spent five years in Ann Arbor, studying for his master’s and doctoral degrees in math. One of his professors said Ted had been his most brilliant student -- Ted earned the only A+ this professor had ever given -- and that got me thinking about all the brilliant but angry young male students I had taught over the years. I always used to try to win them over. Why were they all so angry? Why did I care about them so much? I wondered what I would have done if Ted had been my student, and years later, I had recognized his voice and ideas in that manifesto. Also, I found the ideas Kaczynski expressed in the manifesto to be powerful and partly true -- not that anyone deserved to be blown up by a bomb, but technology and industrialization do threaten to destroy our environment and might result in millions of deaths and the extinction of millions of nonhuman species. Our privacy is being destroyed, everything about our lives is changing, very rapidly, and we haven’t thought very deeply about where all the changes are taking us.

Q: How did your interest in Kaczynski and these big themes of technology, nature, relationships, and life and death come together in a fictional story?
A: When you get an idea for a book and the idea takes off, everything comes together in such a rush you can’t always go back and dissect which ideas came first. I remember stopping at the edge of the Diag, just beyond the Engineering Arch, and thinking: Yes! I have a book!

Q: The novel, though in third person, follows what happens from the main character Maxine’s perspective. We learn what unfolds through her thoughts and eyes. Did this approach happen naturally? How did you decide to focus on Maxine?
A: I always knew the novel would be told through the point of view of the female professor who had taught the bomber in her class. I didn’t want that professor to teach writing or English lit because that’s so overdone, writers writing about writers and writing instructors. Also, I have a degree in physics, and I’ve always been fascinated about where the future is taking us. I’m especially interested in the possibility of human beings living very long lives. So I invented an Institute for Future Studies and came up with the idea of Maxine as not only a professor in that institute but its founder and director. So few women or minorities are futurists! We are allowing straight young white guys to design the future in which all the rest of us will end up living!

Q: Both you and Maxine are professors. How do you relate to Maxine?
A: See above!

Q: You mentioned that you have a science background and then went on to earn your MFA at the University of Iowa. What prompted you to transition to creative writing after studying physics at Yale as an undergraduate?
A: I didn’t understand the answer to that question myself, so I needed to write a book to figure it out. You can read the answer in The Only Woman in the Room: Why Science Is Still a Boys’ Club. Although you can figure out at least a partial answer from the title. (Hint: it’s very, very stressful to be the only woman in the all-boys’ room.)

Q: What’s on your stack of reading these days?
A: I am almost finished with Richard Powers’ The Overstory, which is a life-changing novel about trees (and eco-terrorists … in some ways, Powers covers some of the same ground I tried to cover in The Professor of Immortality). I guarantee that if you read this novel and then walk outside -- especially if you go for a walk in the Arb -- you will feel as if you are living in a different reality than the one you used to inhabit.

Eileen Pollack will read from and discuss "The Professor of Immortality" on Friday, October 11, at 7 pm at Literati Bookstore.