U-M’s "Sense and Sensibility" is an ever-swirling dance 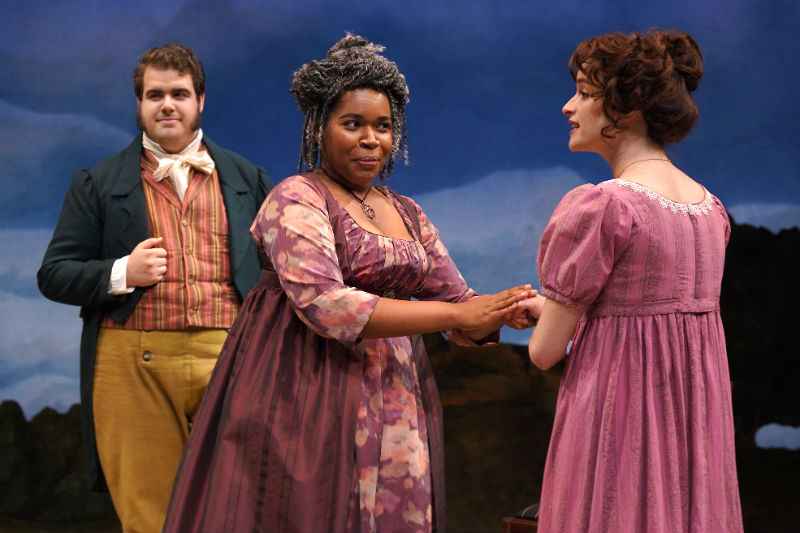 Life is an ever swirling dance in Kate Hamill’s adaptation of Jane Austen’s satirical romance Sense and Sensibility.

Director Priscilla Lindsay keeps her cast, the scenery, the furnishings and the barrage of witty bon mots and nasty comments in constant motion in the University of Michigan’s Department of Theatre and Drama production of Hamill’s Sense and Sensibility.

Reimagining Austen’s book as a dance is a way of both condensing it to a workable length and giving it a theatrical motion that helps capture the often uneasy and swiftly changing fortunes of middle-class England in the early 1800s.

Austen is romance, subtle wit, keen observation of social manners and, also, an early feminist outrage at what women had to do have a socially acceptable life.

When Mr. Dashwood dies, his estate falls not to his widow but his son from an earlier marriage. The son, under the goading of his shrewish wife, sends his stepmother and three half-sisters away. They take refuge in a humble cottage and use what connections they have to entice suitors who will, they hope, deliver them from certain ruin.

Elinor is the oldest and most level-headed of the three. She is the one with sense, who submerges her deeper feelings as a way to deal with life’s problems. Marianne is the emotional, romantic, flighty one. Her sensibility rules in broad gestures and emotional scenes. Young Margaret is too young for all this and is always sent away when the talk becomes too “adult.”

Rather than show elaborate teas where women gather to chat, Hamill has created a Greek chorus of Gossips who stir the pot with their rumors, some true, many not. They don’t stand still, they move in choreographed steps. They also move the furniture and props in looping dance moves.

The suitors come and go, making promises they can not keep and teasing Elinor and Marianne with the hope of rescue.

Lindsay’s cast must deal with the elaborate stage movements, a middle-class 18th-century accent and posture and the fraught, sometimes comic, emotions of romantic excess. 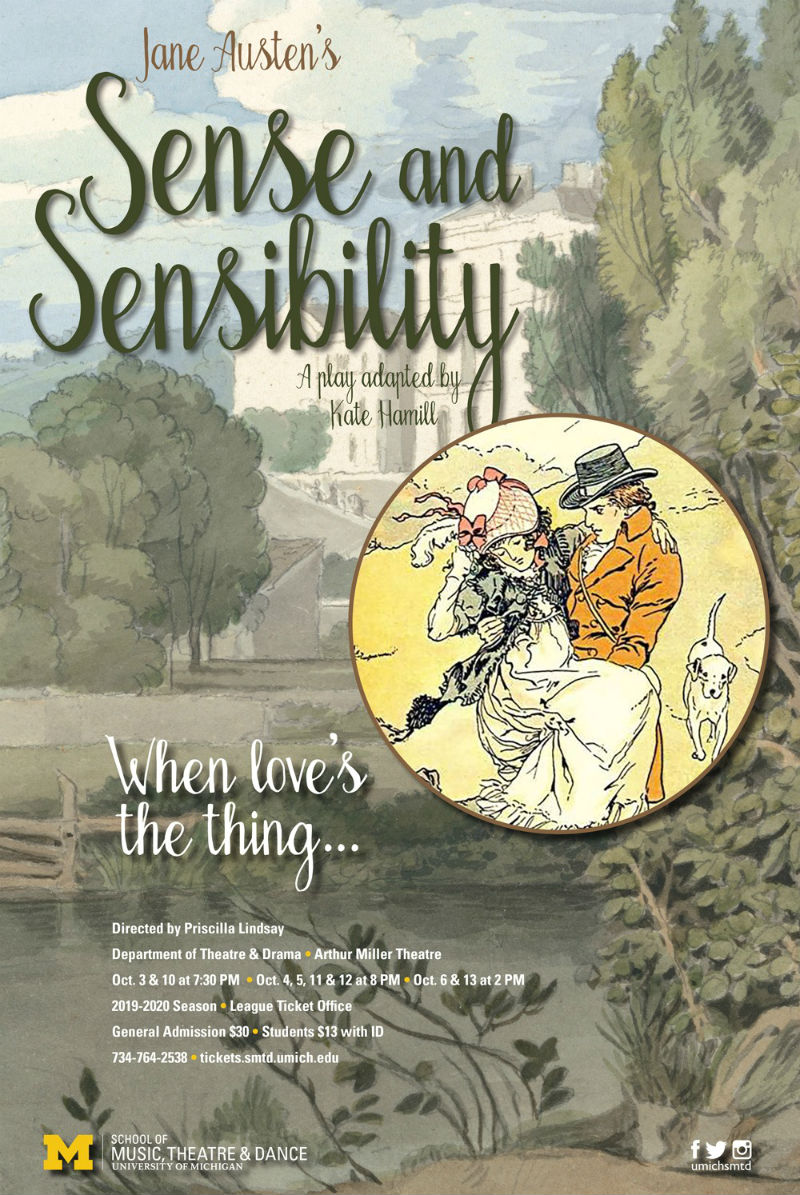 Emma Steiner’s Elinor is right on target. She is sweet, serious, stoic in her emotions until she can no longer hold it in. Elinor is the essential older sister and Steiner makes her appealing with small, nervous gestures and a face that hovers between sympathy and tears. She is wonderfully awkward as she tries to subtly make her intentions known to the handsome Edward Ferrars.

Jillian Garner has the more emotive role of Marianne. She is a lively, free spirit. She is not one to hold back her emotions. She is less restrained than her older sister and easier in the company of men. Garner lights up the stage with this emotionally overwrought young woman, intoxicated with the idea of love.

Ted Gibson is the dashing if bumbling Edward. Gibson gives the role just the right balance as he tries to navigate his affection for both sisters and hide his secret.

Nico Dangla takes on two roles, as do others in the cast. He is the conflicted but easily persuaded brother who throws his family out. John is odd, repressed and a bit goofy. Dangla also plays the flamboyant cad Willoughby, who wins Marianne’s heart in a few days of romantic dalliance, even as he, too, harbors secrets.

Aaron Klein plays Col. Brandon, another kind of suitor. Klein has to play older than his years and he succeeds in making the war-wounded colonel believable in his serious and sad demeanor.

Lolly Duus also has to play older as Mrs. Dashwood, but here the choice is to make Mrs. Dashwood as vibrant and attractive as her three daughters. Duus brings a lot of warmth to the role.

Other standouts are Anna DeMarinis and Emma Singleton as the Steele sisters, who compete with the Dashwoods for suitors; Ashley Stewart-Smith as the social butterfly and matchmaker Mrs. Jennings; Claire Vogel as the lively little sister Margaret; Leyla Beydoun as the nasty sister-in-law Fanny; and Atticus Olivet as Edward’s oddball brother Robert, who does a bizarre commentary on the delights of a simple cottage.

Olivet is also part of the Gossip group who become neighbors and a pack of country dogs and Olivet becomes a pesky horse.

Ron De Jesus handles the choreography, which combines the ever-moving Gossips movements with a bit of period country dancing. Jessica Hahn’s costumes bring alive the look of the period.

There are lapses in getting a consistent English accent and sometimes the Gossips talk and move too swiftly to be fully understood. But overall, this is a solid production of an interesting approach to bringing Austen’s unique perspective to the stage.