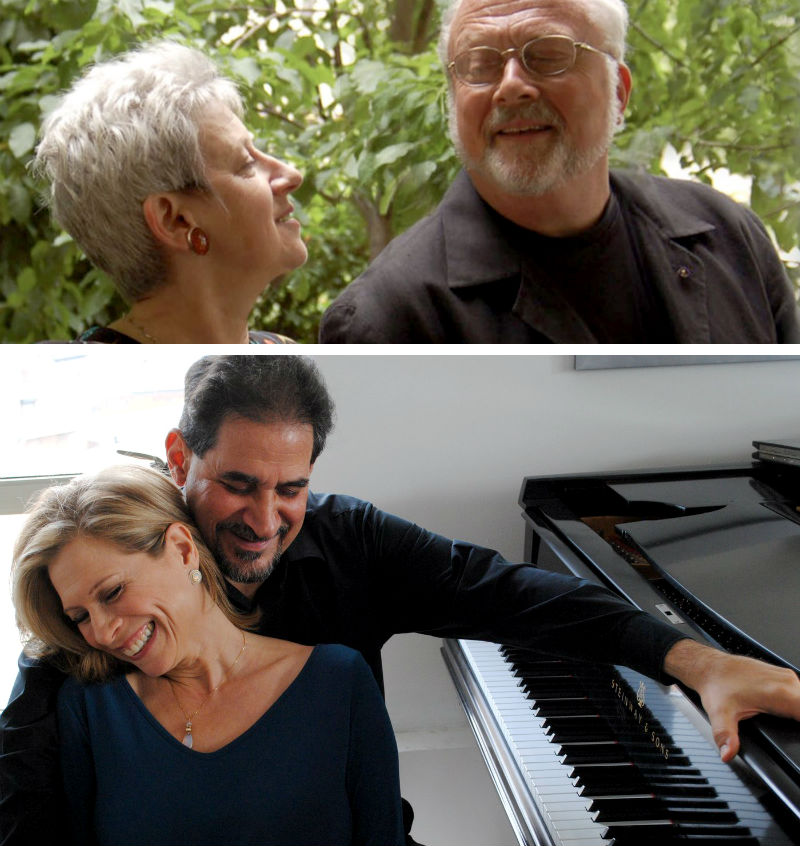 A crowd of concert-goers buzzed with excitement last Sunday as they packed into the seats of Kerrytown Concert House, excited for an afternoon of music with a cabaret duo that over the years has emerged as a community favorite.

Pianist William Bolcom and mezzo-soprano Joan Morris, a husband and wife musical team, are among the leading performers of cabaret music active today, as well as having been members of the Ann Arbor community for over four decades. Both former faculty at the University’s School of Music, Theatre & Dance, they have been concertizing together for over 40 years, and even performed at the very first concert hosted by Kerrytown Concert House some 35 years ago. The duo was joined on the stage Sunday afternoon by another musical couple, soprano Amy Burton and pianist John Musto, for a light-hearted performance billed as “Double Date.”

Drawing from the long tradition of cabaret music, Burton and Musto foreshadowed the emotional tenor of the whole concert when they opened with Cole Porter’s mischievous “Let’s Misbehave.” Above a jaunty piano accompaniment, capability supplied by Musto, Burton sang Porter’s carefree lyrics with wry confidence: “There’s something wild / About you, child / That’s so contagious / Let’s be outrageous / Let’s misbehave!”

Bolcom and Morris matched this humorous tone with the next song, Irving Berlin’s 1913 tune “At the Devil’s Ball,” a song whose narrator has a startling dream about attending a ballroom dance put on by the Prince of Darkness himself, taking amusement all the while at the familiar people in Hell’s hall. The audience reliably chuckled along at the line “I caught a glimpse of my mother in law,” delivered in a knowing, narrative tone by Morris.

The third song, “A Wish” by Fred Hersch -- which saw Burton and Musto return to the stage -- fell on the other side of the afternoon’s emotional spectrum, coming across as somewhat nostalgic and sweet, even melancholy. “How I wish I could be your valentine,” sang Burton as Musto supported the melody with a flowing piano part, every so often punctuated with an evocative dissonance in the upper register.

These three tunes set the tone for the rest of the afternoon, which alternated between jovial and heartfelt. Drawing from influences as wide-ranging as Americana and classic jazz, between the four performers the audience was serenaded with music by Irving Berlin, George Gershwin, Francis Poulenc, Paul Dresser, Eubie Blake, and many others.

Often, the effect of the music was helped along by astute programming. For instance, Burton and Musto gave very convincing, back-to-back performances of Reynaldo Hahn’s “C’est sa banlieue” and A. Thompson’s “When I Learned French,” the juxtaposition of which seemed to accentuate themes within the texts.

The standout songs of the first half, however, were undoubtedly Irving Berlin’s “Russian Lullaby” and “Yascha Michaeloffsky’s Melody,” pieces in which Berlin reflected on his Russian heritage and his newfound fame in America. The latter, in particular, was quite striking. While still retaining the humorous and light tone that characterized most of the program, “Yascha Michaeloffsky’s Melody” represents a surprisingly sensitive treatment of Jewish heritage in the early 20th century, particularly if one keeps Berlin’s (birth name Israel Beilin) own background in mind. In the song, a young boy by the name of Yascha Michaeloffsky emigrates from Petrograd “with a fiddle in his hand” before finding fame as a composer in his new home. “But with all his wealth and fame, Yasch hasn’t changed his name,” a choice which is, notably, the opposite of Berlin’s. Nestled in such a carefree context, the song came off as a pleasant surprise, something which one could think about afterward.

The four musicians ended the first half of the program with Friedrich Hollaender’s “Ich bin von Kopf bis Fuß auf Liebe eingestellt,” or “Falling in Love Again,” as Sammy Lerner’s translation renders it. With Bolcom playing the lower register of the piano and Musto the higher, the vocalists at first alternated singing verses of the song before, touchingly, joining together in harmony to close out the song, after which Morris and Burton turned to each other and embraced.

Following a short intermission, the audience returned for the second half, which was made up of several more cabaret songs in much the same vein. Often, the songs in the latter half of the concert were concerned with unmet expectations, disappointments, or surprising turns, usually played up for comic effect. Mike Stoller’s “Is That All There Is?” for example, follows a hard-to-please narrator as increasingly dramatic events ranging from a house fire to falling in love to death itself all fail to impress.

The standout hit of the second half -- and, really, of the entire afternoon -- was by far Peter Winkler’s “Tamara, Queen of the Nile,” performed hilariously by Morris. Winkler, who is a friend of Bolcom and Morris, gives us a lighthearted tune about a school teacher in New York who, bored out of her mind by the tedium, periodically driving up to Boston to perform in a burlesque club. Singing with her arms rotating above her during the chorus, Morris had the audience in stitches.

The two couples closed out the concert together with an upbeat tune by the Gershwin brothers, “They All Laughed,” which follows the story of a successful musician looking back at all those who never believed the musician could make it in music. “Who’s got the last laugh now?” the singer asks. At least on Sunday afternoon, it looks like that would be the audience at Kerrytown Concert House, who after two encores left delighted and humming.