From the Ancient to the Future: Meleko Mokgosi's "Pan-African Pulp" at UMMA 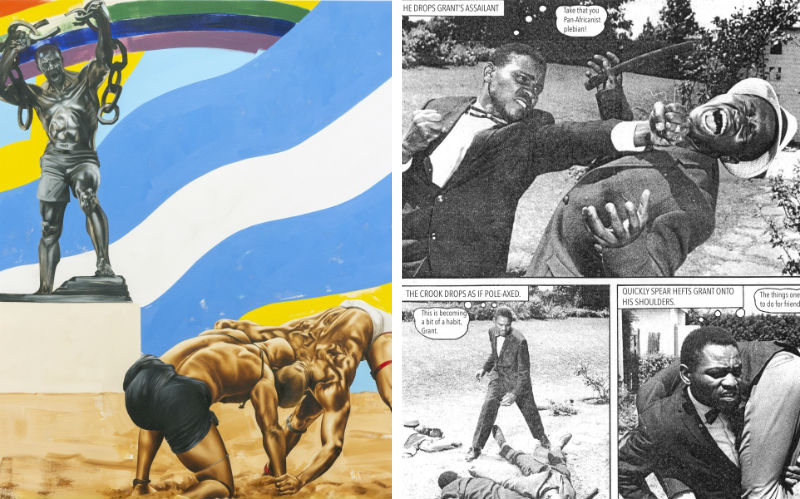 University of Michigan’s Museum of Art has launched a new program of site-specific, commissioned installations as part of a new biennial program, with the monumental work of Meleko Mokgosi. He debuted a solo commission to inaugurate the program, with a show titled Pan-African Pulp.

Mokgosi’s four works boldly fill the Vertical Gallery space at UMMA, with a larger-than-life wall vinyl that extends from the first floor to the ceiling of the third level, a series of enlarged and annotated pages from a Pan-African manifesto, which are displayed below a variety of posters from Pan-African movements, vinyl text that wraps around the second and third level bannisters, and a large painted mural.

A Botswana-born artist living and working in New York City, Mokgosi's works explore the history and meaning of Pan-Africanism, which UMMA guest curator Ali Subotnick defines as “the global movement to unite ethnic groups of sub-Saharan African descent.” Mokgosi takes this movement, which began around the start of the 20th century, and uses it as a starting point to explore themes of “power, national identification, colonialism, globalization, whiteness, transnationality, xenophobia, democracy, art history, gender, labor, and the authoritarian or institutional voice.” Each component of the exhibition engages with one or more of these themes.

This engagement is perhaps most recognizable in the three examples of text-based works in the space, from the altered African photo novel vinyl installation and his large text panels to the textual banners on the upper balconies. In the three-story vinyl installation, Mokgosi culled images from African Film, one of the most popular African photo novels from the 1960s-1970s. The text, however, was altered by the artist, and the final work questions power structures, particularly the authoritarian or institutional voice.

Second, the large text panels are a series of enlarged pages of his annotations to an influential Pan-African manifesto. The manifesto was written after the 1969 Pan-African Cultural Festival in Algiers. This nine-panel installation features the original introduction of the manifesto with the artist’s handwritten notes, which include Mokgosi’s questions and insights into the text. This portion of the exhibition also forms a platform for visitors to engage with theories related to Pan-Africanism through the artist’s eyes.

Finally, the artist employs text around the second and third-floor balconies. Though many visitors will not be able to read the text, which includes two folktales written in Setswana, there is a QR code that can be scanned to view a series of videos of the University of Michigan student interpretations of Mokgosi’s stories in English. The stories, like most folktales, ask listeners/readers, through a fantastical story, to consider how xenophobia and colonialism impact the interpretation of events.

The fourth work in the space is the painted mural, which was produced after the initial opening. The installation was initially opened to the public on August 26, but the painting was completed September 20-22, when Mokgosi painted the mural during gallery hours over two days. Subotnick’s wall text describes the work, saying: “The socialist realist-inspired mural addresses the complexity of blackness anchored by an image of the Zambian Freedom Statue in Lusaka (1974).”

The mural, as Subotnick points out, is done in a Socialist Realist style, a form of art imposed on Russia by Stalin after World War I, characterized by extreme optimism and idealism. The style contrasted to the reality of life in Russia at the time and since has been employed by contemporary artists to critique social structures. The mural depicts multiple scenes, with characters ranging from a young black child, standing near an armchair, a bust of a black woman, a hanging portrait, and a cheetah figurine, each item a referent to colonialism, power structures, collecting and display practices, to name a few.

Each component of the exhibition connects to the Pan-African movement, with the aesthetic choices frequently referencing the period of the 1960s-1970s. Subotnick’s gallery text informs viewers that there is a strong history of Pan-Africanism in Detroit, suggesting that the exhibit “vividly connects to Detroit’s deep history of activism, where organizations such as Black Nation of Islam, The Republic of New Afrika, Shrine of the Black Madonna (Black Christian Nationalism), Pan-African Congress, and United Negro Improvement Association were founded.” Some of the posters on display above the annotated manifesto text, for example, are from organizations founded in Detroit.

The exhibit is limited to the vertical gallery, but it covers a large portion of the museum. Because of its location, it is accessible when the galleries are closed. The vinyl wall panels are difficult but not impossible to see in their entirety from the ground floor. At 5’2”, I was able to crane my neck and awkwardly peer up, trying to read the content, slowly, without sustaining any injury. While this was how I viewed the exhibit, it is not my recommendation, and instead would suggest viewing the vinyl comic strip style installation from the second floor.

The enormity of the work and its heavy textual content might result in visitors to spend a good amount of time with the multi-layered exhibition, leaving the space with a primer in Pan-Africanism, and hopefully, more questions.

Pan-African Pulp is on view at the University of Michigan Museum of Art through fall 2021.