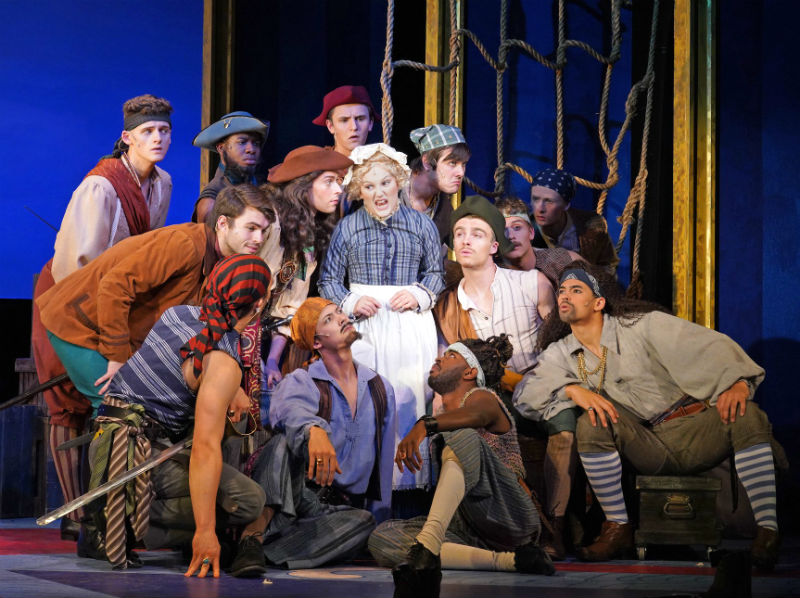 It is the very model of a modern musical comedy.

The University of Michigan Department of Music’s production of Gilbert and Sullivan’s ever-popular The Pirates of Penzance moves along faster than the celebrated major-general’s patter song. The tiny Lydia Mendelssohn stage is alive with color, movement, and music.

Penzance tells the story of duty-bound Frederic, an apprentice pirate by mistake, who announces to the Pirate King that he will be leaving the merry band of pirates on his 21st birthday to go out and see the world and find out about girls. His nanny has been with him and the pirates since she made the mistake of apprenticing him as a pirate rather than a pilot, as his dying father requested.

First day out, he comes upon a flock of beautiful young women and scorns his now amorous nanny. The young women are daughters of a Major General and Frederic falls for the oldest, Mabel.

The plot twists and turns as it always does in Gilbert and Sullivan, from one absurd moment to the next, all linked by songs that alternate the hilarious with the romantic and sentimental.

Cardinal’s production has clockwork precision but is never stiff. Musical director Catherine A. Walker has her singers and small orchestra slide easily into this modern adaptation of the G&S songs while still being true to the original. Cassie Abate’s choreography is perfectly timed, equally athletic, comic and flowing. From high leaps to tap dance contests, dance and song come together.

The flamboyant Pirate King is brought vividly to life by Commodore C. Primous III. He leaps, twirls, taps, and sings with abandon. When Primous is on stage he takes the spotlight, which is quite a feat given the quality of this cast.

Jacob Ryan Smith is every bit the handsome hero as Frederic. His voice is strong. He is both a swashbuckling hero and a naive child. Smith captures both sides of Frederic.

Wilson Plonk arrives on stage with an over large handle-bar mustache, dressed in the medal-bedecked red uniform of a very proper Major-General. Plonk gets to deliver the showstopper “I Am the Very Model of a Modern Major General.” This insanely fast patter song is delivered with a smile and more than a hint of Groucho Marx. He is great when he comes to the end of each stanza and struggles to find the right rhyme.

Lauryn Hobbs is a take-charge Mabel. She has a wide-ranging voice as she runs through the playful runs up and down the scale. She is all smiles and charm as the object of Frederic’s instantaneous love. Hobbs does an especially good job on “Sorry Her Lot,” a song taken from HMS Pinafore that was given a modern almost bluesy style.

When Frederic takes sides against his former shipmates, he enlists the aid of the original comical cops. These policemen are downright cowards and terrific tap dancers.

Sam Faulkner is primly funny as the Sergeant who leads his precision crew through some fast action tap routines while trying to avoid any chance of anyone getting hurt. Faulkner takes the lead with his men as he declares that a policeman’s life is not a happy lot. Faulkner and Primous square off in a funny tap dance contest with excellent percussion accompaniment from the orchestra. Faulkner is an excellent tap dancer.

Nina White plays the flustered nanny Ruth who after rejection acquires the bluster of a pirate. She joins Primous and Smith in a rapid series of songs that convince Frederic that a leap-year birth changes everything.

While Gilbert and Sullivan were very much of their time and place (Victorian England), their music and comedy live on with new interpretations that make it clear there is always a season for romantic music and well-done silliness. This U-M production proves the point.

Spot on Hugh! We saw, heard…

Spot on Hugh! We saw, heard and tapped/clapped along the entire time of this WELL done version!