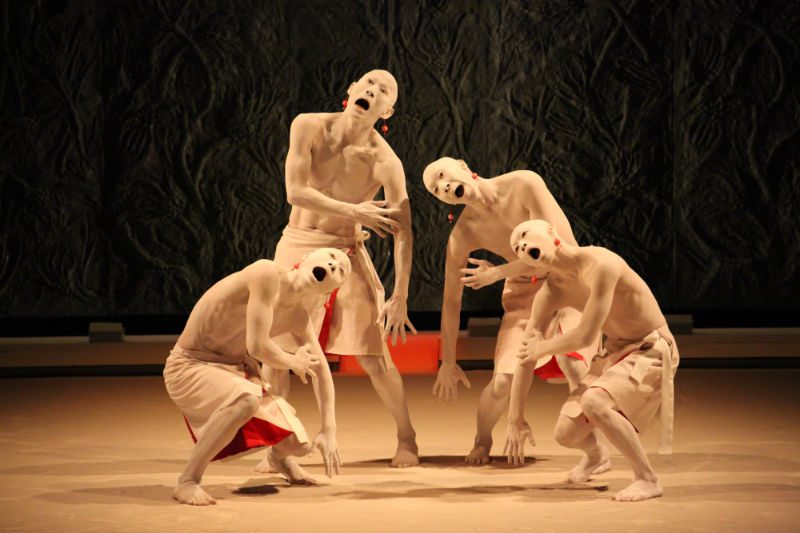 There’s an image I’ve been having a hard time getting out of my head ever since the performance of Sankai Juku’s Meguri: Teeming Sea, Tranquil Land at the Power Center last weekend:

Four dancers in an eerie semi-darkness -- bald, torsos nude, bodies covered in white dust -- stand together in a circle. They stay fixed to the floor, seemingly rooted to the spot, as their bodies turn around in a unified, slow-motion gesture. Their feet rotate in place as their limbs twist together, until legs spiral around one another and the spine and neck swivel to bring the ghostly visages directly before the audience. On the faces, there is an open-mouthed image of silent, inexpressible anguish, a sort of inaudible scream whose riveting force stops your breath. For a moment, before the contorted and gnarled bodies reverse direction and rotate back, you have unshakable certainty that this is the face of a body in pain.

Then the moment passes and the spell dissipates.

There’s no pain here, not really, just illusion and mastery.

This kind of arresting image isn’t uncommon for Sankai Juku, a Paris-based troupe that practices a Japanese dance form known as butoh, an avant-garde genre that arose in the 1960s and is recognizable by its characteristic use of white body powder and shaved heads.

Formed in 1975, this is far from Sankai Juku’s first appearance in Ann Arbor. Since November 1996 the company has given nine performances with UMS, including the two of this last weekend. Before Friday and Saturday's shows, the troupe presented Umusuna: Memories Before History in October 2015, a performance that was memorable not only for the tremendous athleticism displayed by the dancers but also for the minimalist set design. In that performance, a pillar of sand gracefully streamed from the ceiling to the stage, gradually accumulating in a heap suggestive of time’s passage, as if the space were the interior of a great hourglass.

Meguri: Teeming Sea, Tranquil Land preserved this type of minimalist set, but with a far less striking design. In place of the sand pillar as the principal prop a shallow, a transparent water basin hung from the ceiling at stage left, suspended by a cable that split into three just before reaching its load. In appearance, it strongly resembled half of Libra’s scales, but the effect of the image was to make the viewer hyper-aware of gravity’s pull and draw attention to the balance of forces required to maintain an item’s location in space. Strange as it sounds, this was an unusual sensation, touching as it does on an aspect of our lives that usually fades into the background, unnoticed in all but the most extraordinary circumstances.

This interplay of forces is key to both butoh in general and last weekend’s performance. As Sankai Juku’s founder and choreographer Ushio Amagatsu describes it, the dance form is a “dialogue with gravity,” and throughout the evening’s performance of Meguri, a constant theme was the struggle between the human body and its own weight. Every so often this was made explicit. At one point during the second scene, for instance, four dancers lay in a circle facing upright on the stage while lifting their legs and upper back in such a way as to mimic the body’s position during a long fall, holding their limbs in place in a mesmerizing display of muscle control. 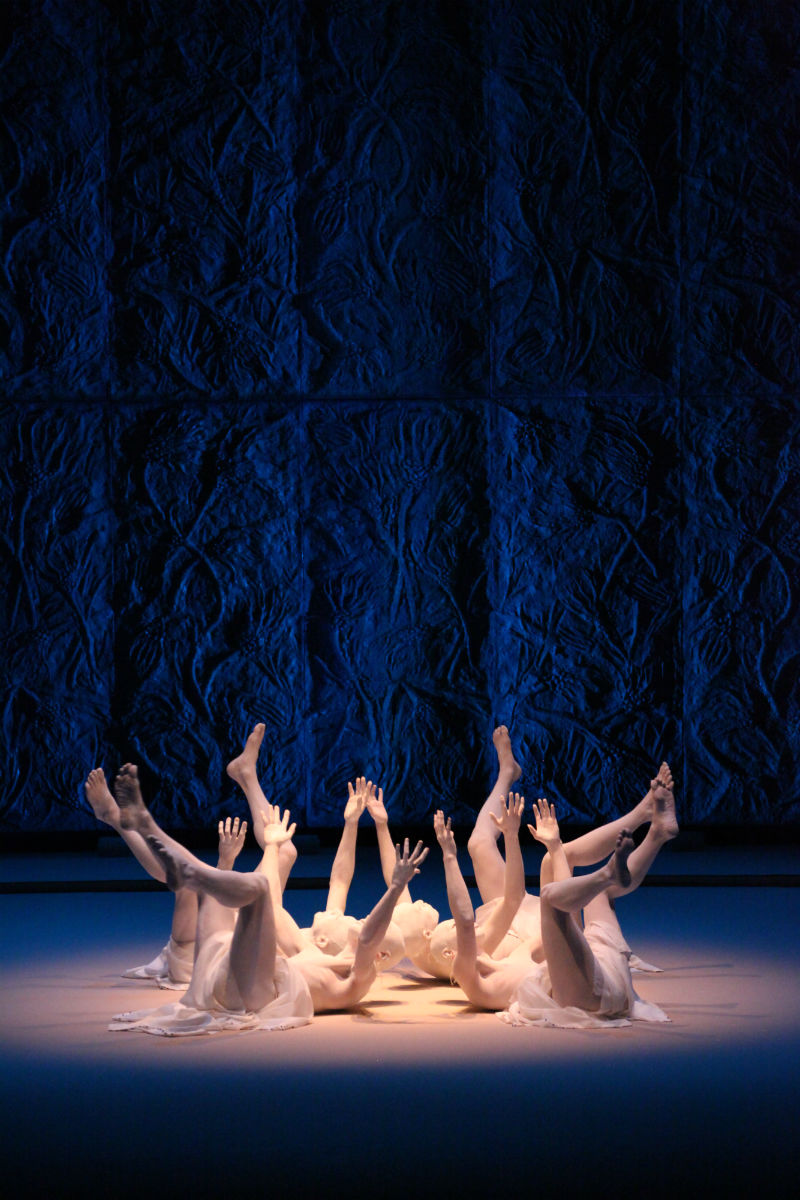 Much of the performance’s choreography relied upon this sort of symmetrical group activity. The genre lends itself to this compositional style quite easily. The costuming and makeup of butoh have the effect of anonymizing the performers, and at a distance from the stage, it’s almost impossible to make out any distinguishing characteristics that might indicate who a particular dancer may be. It’s a natural outgrowth of this that much of the dance tends to be based on group movements and the treatment of each dancer less as an individual than as a component of a larger organism. This tendency is tempered, however, by bringing it into counterpoint with intermittent solo choreography, often foregrounding slow, purposeful gestures.

Meguri began with one of these moments, setting the tone for the remainder of the piece. As a quiet drone enveloped the room, a stately figure entered stage right, processing across the stage with slow, fluid movements and followed by a spotlight, his white-powdered body luminescent in the low light. A cello played a mournful line in its high register, and every so often soft thuds on a bass drum would punctuate the texture. With each drum strike, a ripple of motion would pass through the dancer’s body from the balls of his feet to the crown of his head, a subtle lift and fall.

In the background, four performers lay face up in a circle, heads together, limbs curled up against their chests in a fetus-like position. Gradually, the audience’s attention was drawn away from the soloist and towards the quartet, and once the soloist disappeared into the wings of the stage the focus on the quartet completely consolidated.

Slowly, as the second scene began, the dancers' legs unfolded like the petals of a flower, and moving as if underwater, their swishing extremities somehow took on the character of a sea anemone in a hypnotic pattern of movement. This was just one of several striking quartet moments. Much later, another quartet stumbled across the stage, violently shaking with whole-body tremors like survivors of some cataclysmic event. Every time a group of four dancers acted as a unit it proved to be unforgettable.

There were many other such memorable moments -- too many to enumerate here -- but something else that’s worth mentioning is Genta Iwamura’s subtle and effective lighting. Much of what was so compelling about the performance stemmed from the delicate interplay of shadow and light. The way that dust particles would float in a light beam, say, or how a dancer's shifting movement would cause his muscles to cast ever-changing shadows on their body, or the cave-like backlighting would throw the fossil imprints on the rear wall into sharp relief, was almost as captivating as the dance itself.

By the time the last scene arrived, integrating music and gestures from many of the previous scenes, the audience was totally transfixed by the performance. Despite its abstraction, it was easy to become invested in the atmosphere of the dance, and when the performers lined up to bow at the conclusion of the work, it felt almost like a transgression to break the performance’s ambiance with applause.

Sankai Juku remains as spell-binding as ever.