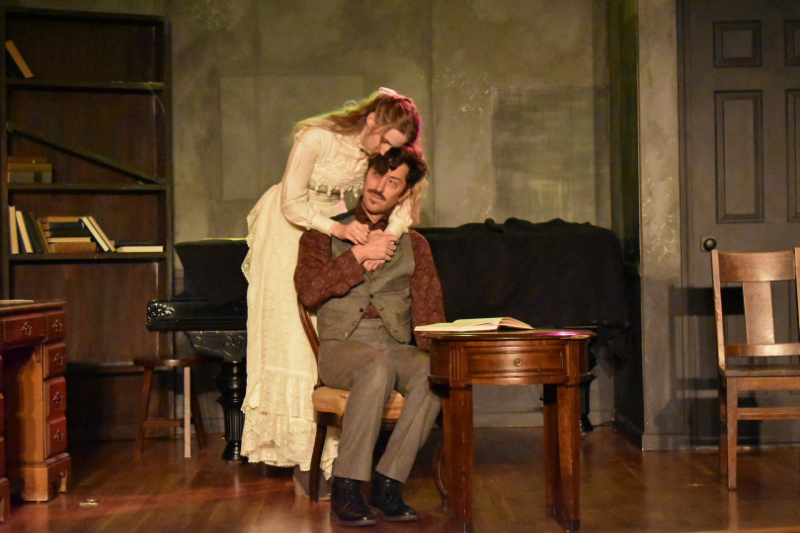 Allyson Miko as the Emily the ghost and Jeffrey Shawn Miller as the unstable Dr. Seward in The Penny Seats Theatre Company's production of Dr. Seward's Dracula.

So it seems. For it’s far more comforting and palatable to believe that humans like ourselves simply aren’t capable of committing the very worst acts of violence and depravity.

But we are, of course. And this unnerving truth is precisely what drives Zettelmaier’s unconventional take on the Dracula story.

Set in London in 1895, in Dr. Jack Seward’s home, the play begins with the former asylum physician Seward (Jeffrey Miller) being visited by the ghost of Emily (Allyson Miko), the love of his life; and writer/Lyceum Theater business manager Bram Stoker (Zettelmaier), who’s perusing Seward’s journals for story material (that will eventually be used for Stoker’s landmark 1897 novel Dracula).

When a local inspector, Louis Carlysle (Jonathan Davidson), shows Seward that his mentor has just been brutally murdered -- by way of a neck wound that suggests a death-by-ravenous-vampire -- and he’s visited in the night by a mysterious figure cloaked in darkness (David Collins), Seward starts to question his own sanity, made cloudier by a months-old, asylum-inflicted open wound, and the morphine he must take daily to keep the pain at bay. 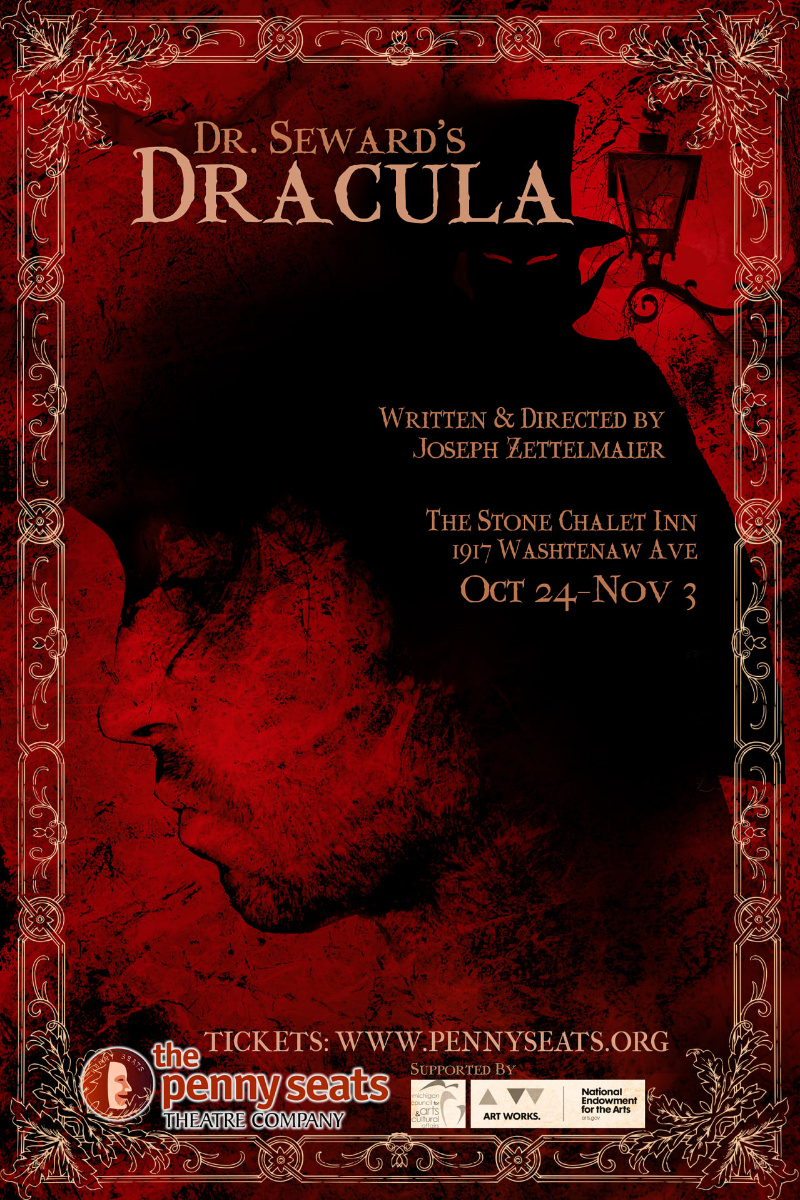 Penny Seats gets full marks for finding (and using) a charming, little-known spot in Ann Arbor for its show, and it’s a neat space, albeit one with challenges. Because the floor is flat, most performances with a nice-sized audience will be at least a slightly obstructed view; the actors’ exit and entrance options are limited, so that, in one instance, an unconscious character must simply stand and walk off-stage; lots of windows and natural lighting rule out the possibility of matinee performances; and the compact theater lighting strips placed a few feet apart along the top of the set can be, at times, squint-inducingly distracting.

That said, the Stone Chalet also manages to somehow be both intimate and spacious, so you feel there’s plenty of elbow room in your seat while you’re also close to the show’s action; the open and airy lobby (adjacent to the performance space) is a lovely place to spend intermission; and the dark night outside those aforementioned windows adds to the Seward’s spooky mood.

Lighting designer Tyler Chinn plays up this shadowy atmosphere for haunting effect, guiding our eye where it needs to be, and ramping up tension (and obfuscation) when appropriate. Jennifer Maiseloff’s economic set design, meanwhile, gives Seward’s home a fittingly spartan aesthetic while also working around an extra layer of difficulty (namely, a grand piano taking up a chunk of space on the stage). Finally, Ben Despard’s costumes -- complete with cravats, Victorian top hats, and bowlers -- unfussily evoke the era; and Paige Conway’s sound effects help make the show a more comprehensively sensory experience.

But it’s Zettelmaier who is Seward’s hands-down MVP, not only for penning the script and jumping in at the eleventh hour to playfully portray Stoker -- the actor originally cast had to drop out for medical reasons -- but also for directing the nearly two-hour show and choreographing its fight scenes.

Seward, however, takes a while to find its narrative footing. The opening scene suggests that Seward and his relationship with Emily’s ghost will be the show’s fulcrum, when in reality, Emily’s supernatural presence is largely a means of communicating crucial bits of backstory to the audience. And things get pretty screamy and shouty in the increasingly tense second act, selling us hard on the story’s high stakes while also making it difficult to take in the information that’s being revealed. (Inspector Carlysle in particular “goes to 11” at his first entrance and pretty much stays there throughout the show.) So more emotional modulation, despite the tale’s terrifying circumstances, would likely go a long way in making a bigger impact.

Nonetheless, Zettelmaier’s game and able cast make this Dracula prequel go. Miller necessarily acts as its nucleus, around which all events unfold, and the actor does so with impressive focus and restraint, making us wonder, at the same time that Seward himself does, how much we can trust what we see him do, and what we hear him say.

So if you’re in the mood for a new twist on an old, creepy tale -- something that’s become a Zettelmaier trademark (The Gravedigger, The Man-Beast, etc.) -- consider checking out Dr. Seward’s Dracula.

And maybe wear a high-collared shirt. Or a really firm neck-brace. Just in case.

The Penny Seats Theatre Company's production of Joseph Zettelmaier's "Dr. Seward’s Dracula" runs at the Stone Chalet Inn, 1917 Washtenaw Ave., Ann Arbor, on Oct. 31 at 8 pm (including Halloween party with the cast), Nov. 1 at 8 pm, Nov. 2 at 8 pm, and Nov. 3 at 7:30 pm. Visit pennyseats.org for tickets and more info.