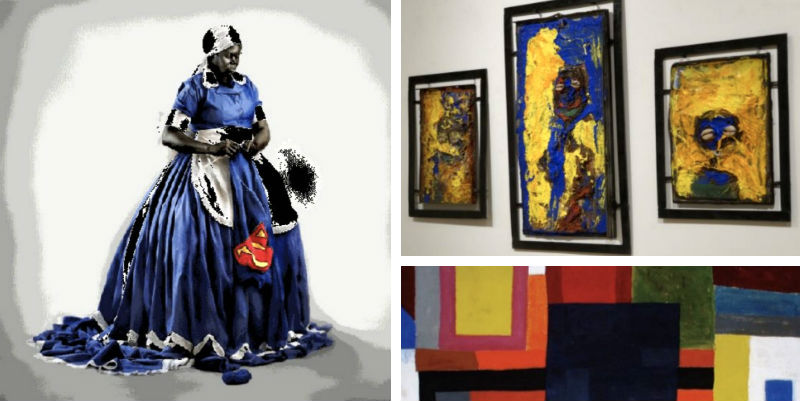 The University of Michigan Department of Afroamerican and African Studies' GalleryDAAS is hosting a multi-media collaborative exhibit by artist and scholar Rachel Willis, titled Il faut se souvenir, we must not forget: Memorializing Slavery in Detroit and Martinique. It combines Willis’ background in fine arts, history, and Francophone studies to bring the under-told history of slavery in Detroit and Martinique.

Willis was raised in Detroit and received a Bachelor of Arts in French & Francophone Studies from the University of Michigan. In her current work, Willis employs a multi-disciplinary approach to her subject matter, using photographs, historical texts, and technology to explore the history of Detroit’s ties to slavery and the French Caribbean Island of Martinique. Willis is currently working on a Master of Arts in Transcultural Studies, with a focus on Francophone and Caribbean history. Her passion to make little-known yet highly important histories accessible through gallery text and voice tour, paired with photography, creates both a challenging and dynamic experience in GalleryDAAS.

To understand the breadth of the exhibit, reading and listening to all associated materials is recommended. First, the artist statement, which is posted in both French and English in the gallery and on its website, offers a summary of Willis’ inspiration and intent behind the work. This statement gives visitors a historical overview of the events, conflicts, and context covered in the photographs and accompanying written and recorded word. Willis’s project begins with the history of the “Meskwaki five,” a challenging -- yet as Willis’ work tells us, not uncommon -- moment in Detroit’s history. After hearing of the Meskwaki five, Willis sought a way to present this history as “a multi-media narrative” that she “could share with others in order to spread knowledge about this interconnected history of slavery in Detroit and Martinique.” The narrative begins with the 18th-century massacre of the Meskwaki (https://en.wikipedia.org/wiki/Meskwaki), a Native American Tribe, at a settlement in Detroit, starting what was known as the Fox Wars. These events led to the sale of “five individuals -- three men, two women” as slaves, who were enslaved to work with sugar cane on the French-owned Caribbean island of Martinique.

One way in which Willis develops her narrative -- created by consulting archival documents, slave narratives, and online databases that map global movement -- is through an audio tour. While there are paper copies with a text version of the guided audio tour transcript, which can also be found on the gallery website, visitors will gain the most from the experience with the assistance of technology.

The audio tour is presented through a series of QR codes that can be found on a handout at the gallery entrance. The audio accompanies 13 photographs on display, which are a collection of photographic images and cultural materials by Willis, Kaisha Brezina, Dr. Tiya Miles, and Michelle Cassidy. The guided tour takes the viewer through speculative histories of subjects in Martinique and Detroit, telling probable outcomes of their encounters and lives after enslavement, alongside images of monuments in Detroit and Martinique that memorialize this history.

Willis uses photographs of slavery memorials in Martinique and Detroit as a compelling means to tell the story of the Meskwaki five. But her project goes beyond their story, incorporating the work of Dr. Tiya Miles, former chair of the Department of Afro-American and African Studies. Dr. Miles’ “Mapping Slavery in Detroit” provides a continuation of the themes addressed in Willis’ work and helps to illustrate the history of slavery in Detroit outside of the Meskwaki five. Her work shows the shift from French rule to British Colonial rule, young post-British Colonial America, and Detroit’s ubiquity as the last stop on the Underground Railroad and seeming champion of anti-slavery and freedom.

Willis ends her statement by encouraging us to visit Mapping Marronage, which is an interactive map, a collaboration created by Dr. Annette Joseph-Gabriel in the Department of Romance Languages & Literatures, which Willis has contributed to for the past two years. [Editor's note: As of November 7, the Mapping Marronage website does not work; we've inquired with the artist and the gallery about the site's status and will update this article accordingly.] This site is a map, a visual compilation of escape routes taken, created from historical data. The mapping site was used while considering the routes of the Meskwaki, and can also be used as a window to see the interconnected stories of slave narratives alongside travels of cultural figures such as Elizabeth Denison Forth, Nicolas Said, Frederick Douglas, Mahommah Baquaqua, and more. These interconnected yet remarkably different narratives lead to Willis’ conclusion that “you will see that Detroit was also a place where individuals from around the world negotiated and confronted the boundaries of freedom and bondage in their personal lives every day.” And finally, “it is important to remember just how global, intertwined, and borderless our histories actually are.”

While the photographic narratives illustrate the possibilities of lives lived by the Meskwaki five, many of them horrific. Speculative fates are grim, violent, or worse, one including mention of a real shipwreck that led to the deaths of 40 captured men, women, and children off the coast of Martinique. The later images in the gallery line-up show familiar scenes from Detroit: a street sign, the Gateway to Freedom monuments, and former sites of routine violence by slaveholders 300-400 years ago in Detroit. While many, if not all, of the scenarios visited in the photographic images and audio tour leave the feeling of unease, Willis creates an immersive and important narrative that allows viewers to consider with gravity how the past and present are connected -- and urges us not to forget.

“Il faut se souvenir, we must not forget: Memorializing Slavery in Detroit and Martinique" is at the University of Michigan Department of Afroamerican and African Studies' GalleryDAAS, Haven Hall, Room 4700, 505 S. State St., Ann Arbor. The exhibit runs through December 11.