In "Find Me," author André Aciman resumes the stories of characters from "Call Me by Your Name" 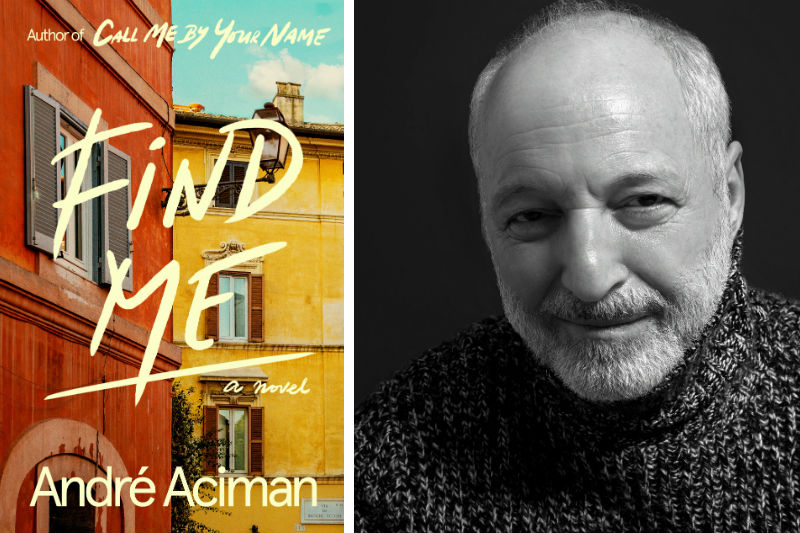 How do we know if we are fully living our lives? Does asking that question mean that we are not?

Find Me by André Aciman is a novel obsessed with these questions. Its characters find such great love that they feel as though they had not been living previously. This book also continues the stories of Elio and Oliver, among other characters, which first appeared in Call Me by Your Name, Aciman’s 2007 novel. While reading Call Me by Your Name before Find Me would provide helpful background, you can enjoy Find Me without having read the other book, as I read Find Me first for this interview with Aciman and then Call Me by Your Name after.

Aciman is a professor at the Graduate Center of the City University of New York and lives with his wife in Manhattan. He will be in conversation with Zahir Janmohamed and also answer audience questions at Rackham Auditorium at the University of Michigan Saturday, November 9, at 7 pm in a ticketed event by Literati Bookstore.

In the four-parted Find Me, the first section focuses on Samuel, who is Elio’s father and receives a bigger role than in the previous book. On the topic of whether someone is truly living, Samuel reflects, “Some of us never jumped to the next level. We lost track of where we were headed and as a result stayed where we started.” As he interacts with Miranda, a woman he meets on a train, he muses about embracing life and how conversely, “Perhaps going about one’s daily life with all its paltry joys and sorrows is the surest way of keeping true life at bay.” This concern becomes not only a call to action and attention for Samuel as he comes to this awareness while his relationship with Miranda simultaneously grows, but also a theme as other characters reconsider their lives in subsequent parts of the novel.

The next three sections of Find Me center on other characters -- Elio, Oliver, and Elio again -- in their first-person voices, and they pick up what has happened in their lives since Call Me by Your Name. The subject of how to live gains more nuance as those characters discuss who they have been, who they are now, and how they have changed over time. Michel, Elio’s lover, says to him, “I suspect we have first selves and second selves and perhaps third, fourth, and fifth selves and many more in between.” He recognizes how, at different times and places in life, we are different people, and then later we are no longer those people. This concept becomes especially poignant between Elio and Oliver.

Not only do people evolve during their lives but they also reveal unique parts of themselves in different relationships and situations. As Samuel says to Miranda, “Most of us never meet those who’ll understand our full rounded self. I show people only that sliver of me I think they’ll grasp. I show others other slices. But there’s always a facet of darkness I keep to myself.” Find Me is also clearly preoccupied with who we are and how we know -- and are known to -- others.

The events and musings of characters in Find Me expose the situational nature of relationships and also embrace intensity and sensuality, though it may be hard to believe the ways and speed in which relationships progress. Fate plays somewhat of a role in bringing characters together, but the novel suggests that the characters’ choices and desires have a bigger effect on their lives. At so many points in the relationship between Samuel and Miranda, or Elio and Oliver, someone chooses or chooses not to say something, or they get scared and bolt. Yet, they discover a greater life when following their desires.

Aciman answered some questions from me before his visit to Ann Arbor.

Q: More than 10 years have passed between the publication of Call Me By Your Name and Find Me. What was it like to write about these characters again? Had you known what would happen between Elio and Oliver in Find Me, or did you discover how their lives unfold while you wrote?
A: If I were the kind of writer who worked with an outline, I would have known. But I discovered their lives as I was writing. The only signposts were those established in Call Me by Your Name.

Q: The idea of the unlived life -- of never really launching, of never finding true love, of losing time -- comes up for characters throughout Find Me. Toward the end, Elio considers that "time is always the price we pay for the unlived life.” What draws you to write about this hazard or fear in life?
A: Most of us live with regrets, things that we fantasized but never found or never had the luck or courage to seek out. Missed opportunities, or opportunities we never even recognized as such, make up a good deal of our lives. There comes a point, as in the case of Miranda’s father, where the unlived life stares at you, and you realize that there is no such thing as closure; most of the things we wished to accomplish remain unfinished. Music, as Oliver finds out, is also a keen reminder of the things we have not lived and must live.

Q: When Samuel and Miranda connect in the first section of Find Me, they are both thrilled to have met each other and also fearful of their relationship ending. Samuel, or Sami, imagines reaching heaven and imploring God for more time with Miranda, a person with whom he rapidly falls in love. In some ways, their relationship feels very real, and in other ways, it seems impossible to find true love that swiftly. What inspired their bond?
A: Two things inspired their bond: that it happened without the least expectation -- what I call the gift of the adventitious -- that it caught them totally unprepared and therefore unencumbered with expectations; and secondly, and especially in Sami’s case, that he realizes that he is being offered the gift of happiness, maybe for the last time and that this is not the time to dither.

Q: Call Me By Your Name became a movie. Did that impact how you think of these characters and/or how you write? Why or why not?
A: I never really saw a connection between the movie and Find Me. The characters are older, which makes them fundamentally different. The only thing that I borrowed from the movie was Sami’s name. In Call Me by Your Name, his name was Prof. P. In the first version of Find Me, he did not even have a name, as I couldn’t decide what to call him.

Q: Are you considering another novel with these characters after Find Me, or is it too early to tell? What are you working on next?
A: I don’t think that I will go back to Call Me by Your Name. I am writing a novella right now for Audible, I hope to see a collection of essays published by late summer by Farrar Straus Giroux, and I am also working on a modern version of the letters of Mariana Alcoforado.

André Aciman is in conversation with Zahir Janmohamed at Rackham Auditorium at the University of Michigan Saturday, November 9, at 7 pm in a ticketed event by Literati Bookstore.