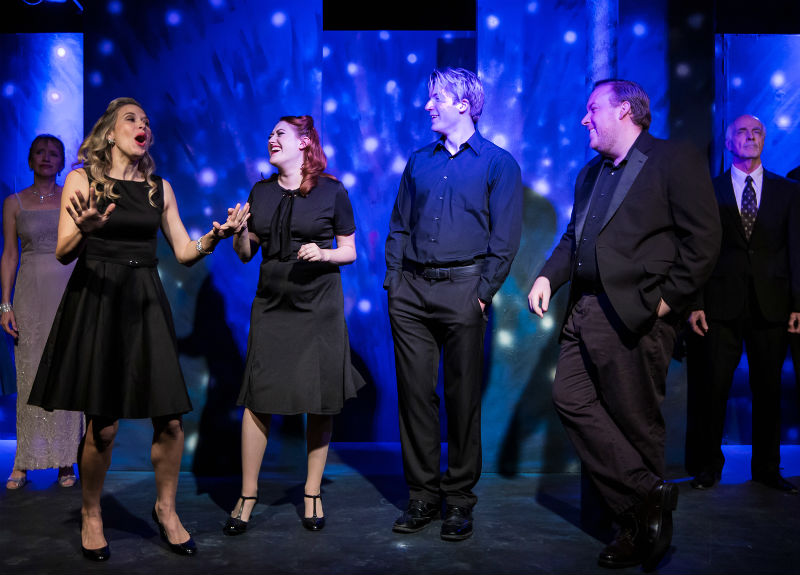 Theatre Nova has chosen, appropriately, a showbiz musical as a fund-raiser for the innovative professional theater that specializes in new plays and new playwrights.

This play isn’t new nor are the writers, but the show-business environment and its emotional ups and downs are perfect for reminding theater-goers why live theater matters. Follies, with music and lyrics by Stephen Sondheim and book by James Goldman, is a tip of the hat to obsessions, from being on stage to matters of the heart.

Nova recently received a matching grant of $15,000 from the Michigan Council of Arts and Cultural Affairs and the National Endowment for the Arts. The two-weekend limited run of Follies is one of several fund-raisers to meet the match. Nova is presenting a stripped-down, concert version of the musical that puts the spotlight on the songs and keeps the focus on the central story of two former showgirls and their unhappy marriages. Actors double up on some roles and side plots are eliminated.

The story concerns a reunion of Weismann Follies showgirls (a fictional Ziegfeld). They gather together in an old Broadway theater in 1971, 30 years since they last performed just before the U.S. entry into World War II.

Phyllis and Sally were once roommates when they were in their late teens and starstruck in the Big Apple. They were pursued by two stage-door admirers. Phyllis married the dashing Ben, who found success in New York as a businessman and politician. She’s become cynical and has a tart tongue. Ben is a philanderer. Sally has been carrying a torch for Ben since 1941. She married the stolid Buddy, who has put up with her depression and unhappiness for 30 years. He’s a traveling salesman who has found cold comfort from a younger woman in another town.

These troubled relations heat up when Sally and Ben come in from middle America and old feelings start to flare. Also, throughout, the characters are haunted by visions of their younger selves.

As with all Sondheim musicals, the songs are meditations on love, regret, betrayal, and other aspects of life. They are often musically and lyrically complex. In Follies, Sondheim also pays tribute to the musical styles of the 1920s and 1930s when Phyllis and Sally were in their prime. For my taste, some of the songs get a bit tedious and overwrought, but several songs have become standards.

The concert version strips away the backstories on the other showgirls but leaves room for spotlight performances of the songs.

The musical accompaniment is also spare. Brian E. Buckner is the music director and also a one-man band on keyboard. He’s excellent and gives some sensitive and tasteful accompaniment. It works well in Theatre Nova’s small space.

Diane Hill plays the acerbic Phyllis. She confronts Ben when he asks for a divorce with the teasing and biting “Could I Leave You.” Hill bites into every word to make clear her disdain but also her mixed emotions. She also does well on the tongue-twisting story of “Lucy and Jessie” which suggests her complex relations with Sally.

Sue Booth plays Sally. She has two standout moments. She tries to explain her staying in her marriage with the sad “In Buddy’s Eyes.” But the real heart grabber is “Losing My Mind,” a bitter take on unrequited and foolish love. Booth’s voice cracks with emotion as the song comes to an end.

Roy Sexton is outstanding as Buddy. He has some of the most complex songs exploring the most complex emotions. His takes on “The Right Girl” and “Buddy’s Blues” are vocally strong and emotionally engaging as he conjures up a dialogue with his girlfriend while still yearning for the love of his wife.

Thomas Murphy plays the vain Ben. He ponders “The Road Not Taken” and celebrates “Live, Laugh, Love” even as he begins to lose his swagger.

Other standouts: Olive Hayden-Moore is funny, engaging, and appealing on two of the shows most often performed songs “Broadway Baby” and “I’m Still Here.” Edith Lewis and Emily Rogers-Driskill perform “One More Kiss” as the same person at different ages and show how age may both diminish and enhance a singing voice.

The younger versions of the troubled couples do a fine job of playing the characters and performing the difficult “You’re Gonna Love Tomorrow” and “Love Will See Us Through.” They are Annie Kordas, Connor Thomas Rhoades, Eddie Rothermel, and Kryssy Becker. Rhoades also plays the Follies MC, Roscoe, and performs the show opening “Beautiful Girls.”