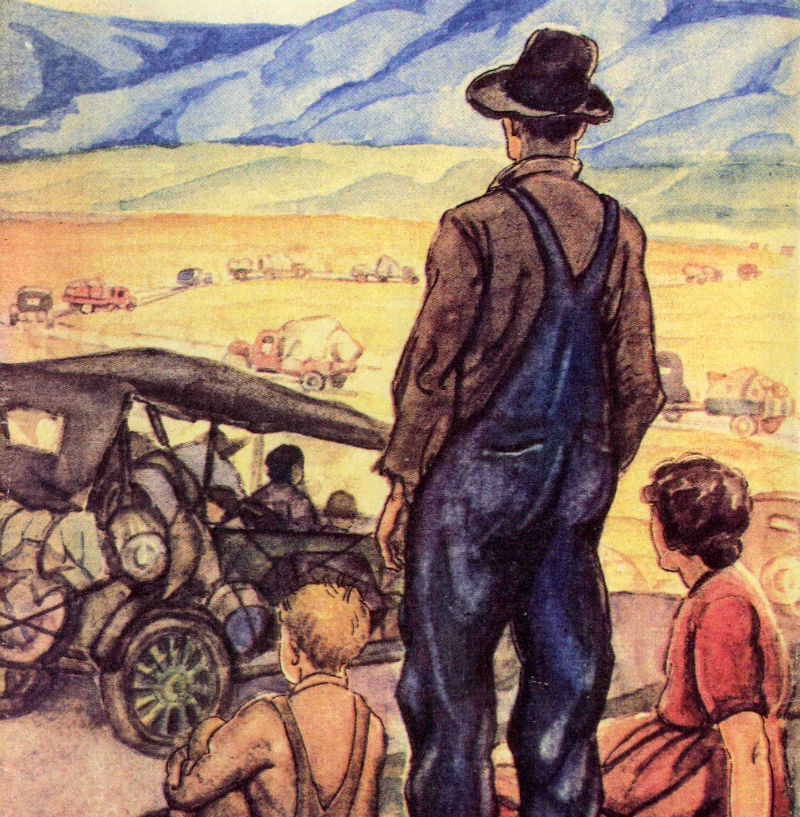 Excerpt of the book cover for the first edition of The Grapes of Wrath, 1939.

John Steinbeck’s The Grapes of Wrath is a great American classic.

It is set in a specific time, the Great Depression of the 1930s; specific places, the Dust Bowl ravaged southwest and the fertile promised land of California; and a specific group of people, the migrant Joad family of Oklahoma, one of many families looked down upon as ignorant Okies, traveling with hope for a better life. Yet the story continues to resonate as migrants make their way from Central America to the United States border and from Syria and North Africa to the shores of Europe in search of justice, peace and a chance for that better life.

The University of Michigan Department of Theatre and Drama is presenting a production of Frank Galati’s critically acclaimed stage adaptation of Steinbeck’s novel.

Galati began workshopping the play at Chicago’s Steppin’ Wolf theater and in Britain and New York City. It was nominated for eight Tony Awards in 1990, winning for best direction and best play. To create a drama from Steinbeck’s sprawling novel, Galati had to reshape and condense the book and shift the emphasis.

“He took a long time workshopping it with actors and cutting and adding. They put a lot of music in it that helps the narration move forward,” said Eaton. “What we’re missing often is the deep characterizations, the way Steinbeck describes the interactions.”

“The other thing that isn’t in the play are the extraordinary, what we call intercalary chapters, which is every chapter that doesn’t have to do with the Joads and their journey is Steinbeck having a chapter to focus on one issue, whether it’s car salesmen, the fate of the world or what actually caused the dust storms,” Eaton said.

Galati instead focuses on the family story. Eaton’s production makes a commentary on some of the issues that Steinbeck covers with casting that emphasizes just how timely, universal and troubling Steinbeck’s story was and continues to be.

“We have a wonderful, diverse cast of actors,” she said, "One of the things when you read the book, John Steinbeck focused on one particular group of people caught in the disaster, but the Dust Bowl affected everyone, everyone on the margins of American society, African-American, Mexican-American laborers, sharecroppers, Asian farmers. They are all represented in the play. As written by Steinbeck, it’s an Oklahoma story, but it’s something that happened to a diverse group of people. We’re representing that in the play.”

“For me, some of the challenges of playing in the role are playing a central character to a story that has historically been told by people that do not look like me,” she said. “I am a black woman and although black individuals did survive the Dust Bowl and the Great Depression, their stories are a little harder to find in the literature. The truth of the matter is that black Americans were migrating west along with their white counterparts. In research, I found that many black individuals would receive work at many of the migrant camps like the Joad family stop at, but they would also be the first ones fired at these institutions as well.”

Eaton said her cast members are finding many things in Steinbeck’s book and Galati’s play as relevant now as they were when Steinbeck wrote the novel.

“What is interesting to them is affordable housing, questionable lending practices, the ecological catastrophe and how it will affect their futures. That’s what they find in common with these people,” Eaton said. “I’ve given them a lot of research to look at. We have all the wonderful photos of Margaret Bourke-White, Dorthea Lange, and Walker Evans. White was a grad and alum of Michigan. I think those are very affecting to people and the cast, and they are also affected by the similarity of those pictures from today with shots of incarcerated children, people on the border and images of immigration and migration, that’s very real to them.”

Pierson said that one of the things the play highlights is how arbitrary the “rules of life” were enforced on the Joad family.

“Their survival is based on the will of others,” she said. “There are multiple moments during the play where Tom Joad [my son in the show] finds himself having to decide between what is right morally or whether he should stay in the good graces of the powers that have authority over him.”

The Grapes of Wrath will be presented on the large Power Center stage, but the staging will be simple, using props to move the story across time and country.

“It’s a Greek tragedy idea of a simple stage,” Eaton said. “Everything is built by the actors with materials found on stage. Certain characters are part of the family and others form a Greek chorus and like a Greek chorus they move the story along and comment on events and they help the narrative move forward all the while constructing the play as we move from one scene to another.”

Also commenting on the action are musicians who are on stage throughout the play.

“I have three wonderful musicians who are on stage as part of the chorus, a banjo player, a cymbal player, and a guitar player. We also have a harmonica player and a wonderful young man named Sawyer Denton, who has composed tunes for us that we’ll be using throughout the show and other music that has been written, all by students,” Eaton said. “I wanted it all to be done by the students’ creativity.”

Pierson said the story’s relevance today is that there are families everywhere who desperately need to find a “new beginning."

“They cannot stay on the plot of land that they have called home for so many years because the government has taken that away from them,” Pierson said. “This seems to be a stark comparison to the immigration conversations of immigrants from Mexico, Central America, Africa, and even some Middle Eastern countries. Individuals are coming to this land out of desperation. In some cases, they are seeking refugee status in America because the other option is to die in their country of origin.

“The reasons why an individual or a family comes to America are wide and diverse but the commonality is that the process for everyone is a tumultuous one. During these journeys, they do pass away and families are separated. Some individuals find love amongst the hate and others are stuck staying where they reside because they cannot see another way of life for themselves. Each of these situations happens to the Joads.”

Eaton said novels like Grapes of Wrath and the great 19th-century novels taught what it means to be human.

“This is ultimately a story of a family under duress and the one similarity we have with Steinbeck is that the family is under duress right now,” Eaton said. “The ordinary folks take a beating and have to absorb the shocks on society most directly. That’s why this book survives.”

Pierson said she hopes audiences leaving Power Center will wonder what they can do to help the Joad families of today and that the rhetoric that makes villains of migrants is not a new tactic.

“Just like all the previous times, people have risen above it and still persevered,” she said.

Frank Galati’s stage adaptation of John Steinbeck’s novel "The Grapes of Wrath" will be presented at 7:30 pm on Thursday, Dec. 5, at 8 pm on Friday and Saturday, Dec. 6-7, and at 2 pm on Sunday, Dec. 8, at the Power Center for the Performing Arts, 121 Fletcher St., Ann Arbor. For tickets and information, call 734-764-2538, go to tickets.smtd.umich.edu, or go to the League Ticket office at Fletcher Street and North University Avenue 9 am to 5 pm, Mondays-Fridays, and 10 am to 1 pm on Saturday.