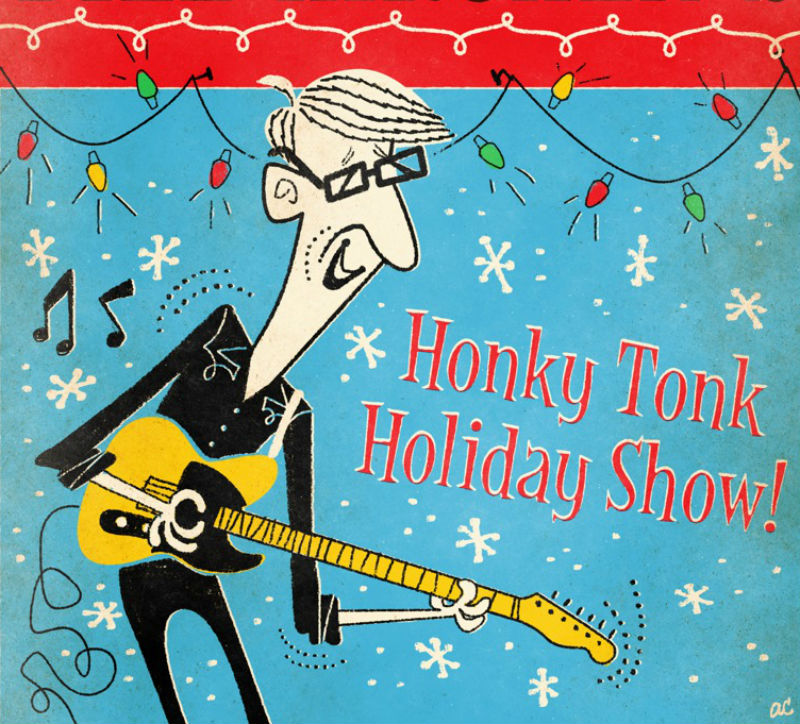 Kirchen hit it big early in his career as the lead guitarist for Commander Cody and His Lost Planet Airmen; he’s responsible for the dazzling guitar work on their enduring 1972 hit “Hot Rod Lincoln.” He’s since become known as an absolute master of the Telecaster guitar, playing with a nearly endless list of impressive names through the years.

Most recently, though, Kirchen has found one more way to shine: He’s become well known for his Honky Tonk Holiday tours, which showcase some of the most amazing, overlooked Christmas-themed gems you’ve never heard, alongside some other favorites from throughout his storied career.

On Sunday, Dec. 1, Kirchen brings his annual holiday spectacular home to Ann Arbor for a show at The Ark.

Dusting off should-be-classics like “Daddy’s Drinkin’ Up Our Christmas,” “Silent Surfin’ Night,” and “Truckin’ Trees For Christmas,” Kirchen -- now based in Austin -- will appear with his backing band The Hounds of the Bakersfield, featuring Rick Richards on drums and David Carroll on stand-up bass.

Kirchen took the time to answer a few questions via email, reflecting on the upcoming show and his time in Ann Arbor. 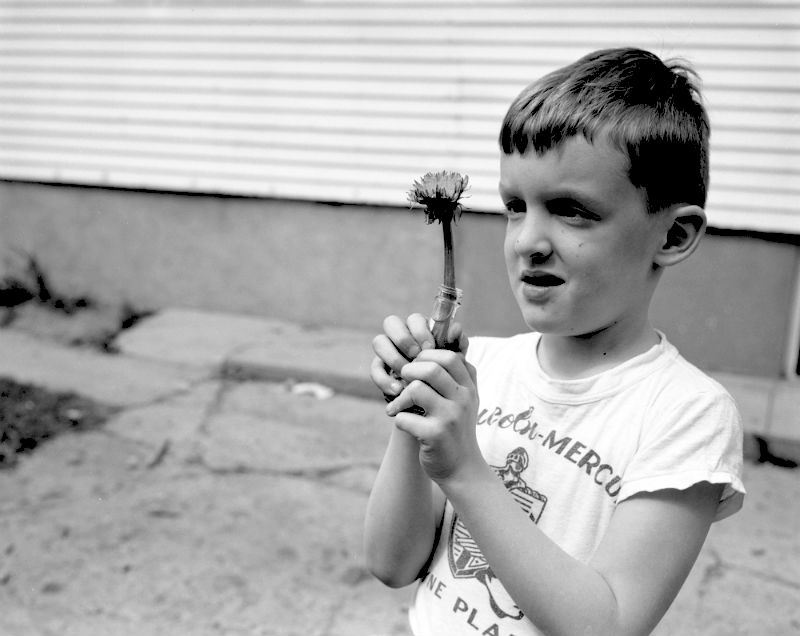 Q: You’re based in Austin, Texas, now?
A: Yep. Chased the grandkids, daughter, and son-in-law down here almost 10 years ago. I’ve been coming down here to play music the better part of 50 years, so I have a lot of friends and history here. It’s still a soulful town. We’re struggling with explosive growth, but that comes with the territory. It’s a magnet town for pickers and writers, with no actual music industry! I like the community here, but need to make a lot of my livelihood on the road.

Q: How long have you been playing with the Hounds of the Bakersfield?
A: Since I moved to Austin, though we rotate the band name. I’ve known bass player David Carroll much longer, at least 20 years. Drummer Rick Richards I met when I got here.

Q: How often do you get back to Ann Arbor? Do you still have any family here?
A: At least once a year. Still have a sister Betsy and a brother Harold and sister-in-law Pam in Ann Arbor.

Q: Do you have any particular favorite memories of your days in Ann Arbor? Any favorite hangouts or events that you still think of fondly?
A: Heck yeah. A great place to “grow up,” and I use the term loosely. Favorites? The Ark. The Cinema Guild, for old B&W movies as a kid; then, later, George Manupelli’s Film Festivals. The MUG in the Union and Dominick’s were where I’d find the bohemian crowd in the mid-'60s. While a senior at Ann Arbor High, I created a work/study program that allowed me to leave for the day at lunch, head up to campus, and just hang out. Sweet. It turned out to be actually very enriching, not to mention way more fun than school at that point.

There was a tremendous folk music scene here. Herb David’s Guitar Shop saw it all come and go. He fixed up a banjo for me that my mom got during a 1930s banjo craze. I saw Clarence and Roland White and the Kentucky Colonels at the Golden Vanity downtown, Junior Wells and Buddy Guy, then the Kweskin Jug Band at the Canterbury House, and much more. Odetta, Bill Monroe, Dave Van Ronk, Pete Seeger, Mike Bloomfield, Brownie McGee, all at various places on campus. I watched Bob Dylan, solo ’64, at my high school from up in the light deck right above the stage. 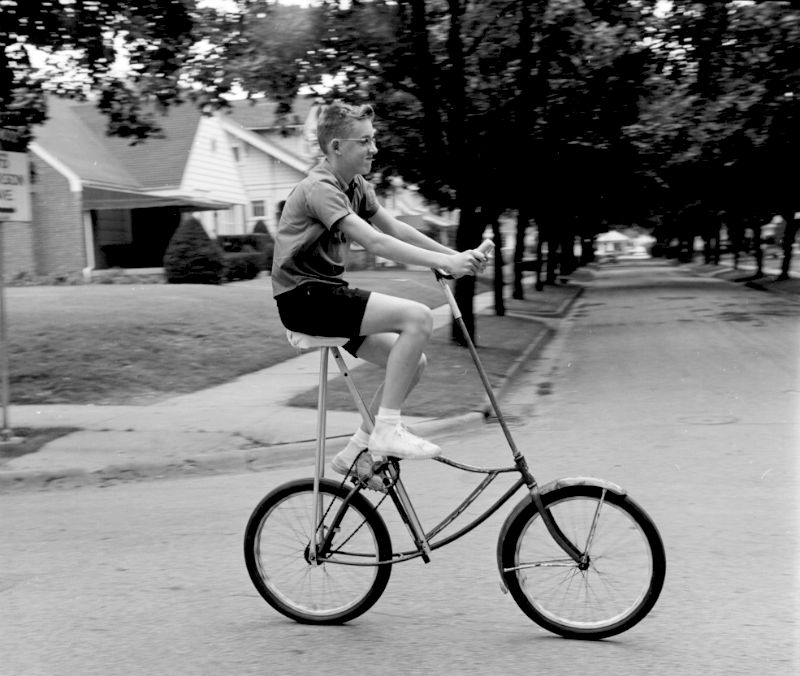 Caption from the Ann Arbor News, Sept. 3, 1962: "Bill Kirchen, 14-year-old of Mr. and Mrs. Calvin J. Kirchen of 1507 Abbott Ave., is shown on his extended, high-seat bicycle he and a neighbor friend, John Gostic, created as an interesting diversion on a summer day. Bill is riding high this last week of summer vacation. He is an Ann Arbor High School 10th grader." Donated by the Ann Arbor News. © The Ann Arbor News.

Q: What was it like to be part of the Ann Arbor music scene back in those days?
A: Ann Arbor was a crossroads for musicians, artists, fellow travelers, and advanced thinkers, many of whom I’m still friends with today. For every name artist I mention, there were a dozen locals and visitors who had a very big impact on me.

When I started, I met a lot of musicians at the U of M Folklore Society meetings. Three of them were, among other things, country-blues players. They had an apartment with motorcycles in pieces in the kitchen, a living room crammed with guitars, cool blues records, and a harpsichord one of ’em built. I was just a kid, a junior in high school, but they’d let me come over, play records, and show me how to fingerpick guitar.

I loved Mississippi John Hurt, who I heard there. They said why don’t you go to the Newport Folk Festival and see him? So summer of ’64, barely 16, I hitchhiked to the festival, saw John Hurt, The Staple Singers, Bob Dylan, Jim Kweskin, Lightnin’ Hopkins, Skip James, Son House, The Swan Silvertones, Jimmie Driftwood, Doc Watson, Johnny Cash, Judy Collins, the list goes on and on. That festival, and the one next year, pretty well blew away the competition for what I was going to do before I, or if, or when, I grew up.

In ’64 this guy drives up and parks right on the sidewalk of the Union in his Peugeot car, which actually still had a crank you needed to stick in the front to start it, if your starter motor was broken, like his. I visited him at the Tassajara Zen Center in Big Sur, and still see him today in Vancouver where he teaches ocean sailing and celestial navigation. Another guy came through town who had played with Bill Monroe, and I sat in with him and sang a song. He sold me a Martin D-18 guitar and taught me how to hop freight trains.

In 1966, two buddies and I hopped those freights back from SF to Ann Arbor, where we started my first electric band, The Seventh Seal. Psychedelic folk-rock. We rented the bandshell in West Park for $15 a pop and put on the town’s first outdoor rock shows one summer, every Sunday afternoon. ["Local Group Denies Playing Riot-Causing Music," Ann Arbor News, July 19, 1967]

Two noted musicians from the U of M rock ’n’ roll scene saw the Seal on stage at the Cinema Guild, playing along with some Warhol movie while Gerard Malanga danced around the stage in chains. They invited me to play with them, and that became Commander Cody and His Lost Planet Airmen. We played Mark’s Coffeehouse basement, Mr. Flood’s Party, The Blind Pig, the Canterbury House, Hill Auditorium, frat parties, the Cinema Guild, the Ozone Homecoming Parade, and doubtless many more that have slipped through the cracks. 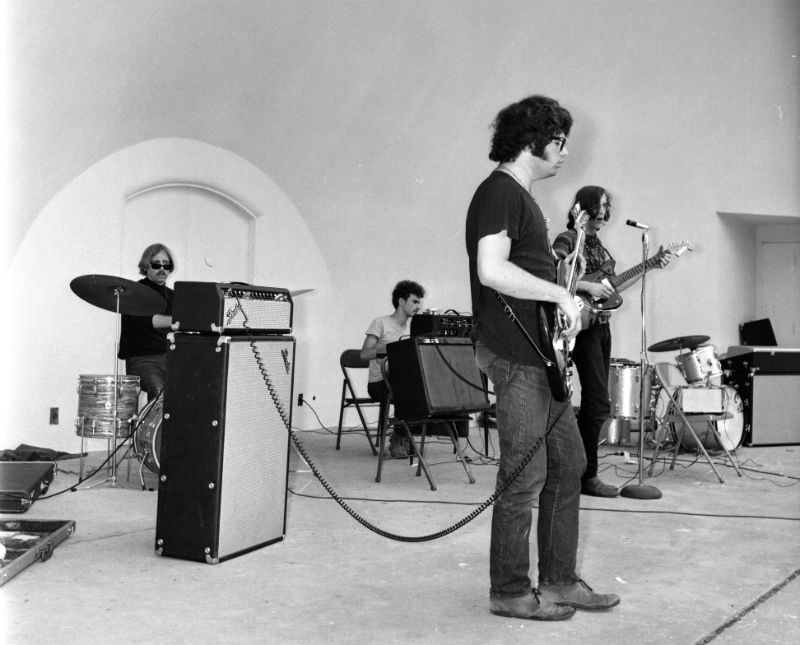 Caption from the Ann Arbor News, July 19, 1967: "Sunday Concert in West Park: Ron Miller of 1023 Church (right foreground) plays the electric bass guitar at one of The Seventh Seal's Sunday concerts in West Park band shell. Bill Kirchen sings into the microphone just behind Miller. Steve Elliott plays the drums at left. Dan Chesluk is playing the electric organ at center. The concerts are well attended, with hundreds of persons showing up last Sunday. Many city residents have joined the crowds -- some to satisfy their curiousity." Donated by the Ann Arbor News. © The Ann Arbor News.

At the ’65 high school senior talent show I put together a jug band, The Who Knows Pickers. We had learned “Subterranean Homesick Blues,” already out and on the air, a rock ’n’ roll record by Dylan. I electrified my guitar, but the director wasn’t having it. He’d gotten hay bales for us, and that was that. I went back to Newport that summer of ’65 and saw Dylan go electric with Bloomfield. I heard no boos. My take is that people in the audience overwhelmingly loved it. Booing as an audience team sport began later.

The Iguanas were also on that high school talent show. Jim Osterberg (Iggy Pop) sang “Jolly Green Giant” from atop a tall riser while drumming. About a year later I caught the tail end of the first Stooges (then the Psychedelic Stooges) performance at their manager’s house, right up the street from me. Iggy had spray-painted his face gold and was sitting on the floor shoving a mic in and out of a vacuum cleaner. A little later, when he got the band up and running, they were undeniable. We did a couple great shows with them in the late ‘60s.

One more Ig-related influence: Danny and Michael Erlewine’s The Prime Movers, with Iggy on drums, were fantastic. Blues, New Orleans, heavy roots stuff. Danny was my first electric guitar hero. Two songs, in particular, stuck with me. Their keyboard player, Robert Sheff, worked at Discount Records, and when asked he found me the album Home of the Blues with “Ooh Poo Pah Doo,” by Jessie Hill, plus a Swan Silvertones album with “Seek Seek and Ye Shall Find.” Quite possibly the best two albums I’ve ever owned. Sheff, now Blue Gene Tyranny, is a longtime avant-garde composer living in NYC. The Once Group, a free-wheeling Ann Arbor music and art collective, had lured him up to town from his native Texas.

Q: Your “Honky Tonk Holiday” shows are known for showcasing little-known but fantastic gems of holiday music. How do you find these songs? Have you specifically sought them out, or just stumbled across them over the years?
A: They find me! There are a lot of vernacular music genres where holiday songs of questionable taste are not a problem.

Q: What makes for a good holiday song? What are a couple more traditional holiday songs that you love?
A: I love all the traditional carols, probably know at least a dozen, but only the first stanza or so. Someday I’d like to go caroling again, where you go around in the evening and stand under people’s windows and serenade them. Pro tip: This Christmas, buy a bunch of kazoos, enough for all the family and guests; then get everybody on ’em and buzz through the carols. You will thank me.

Q: As one of the founders of the Americana movement, how would you assess the overall health of the genre today? Any particular favorite artists you think deserve a wider audience?
A: I think that’s a young man’s job. I like a lot of what I’ve heard and am certainly not worried about the future of Americana, or pop, or acid death metal. Technology will change and the genres will morph and sort themselves out. I enjoy it when friends recommend great new stuff, or my pals put out cool new stuff, or I discover tunes online. But I don’t seek it out or really keep track.

I already have way more music under my roof than I’ll get a chance to hear in this lifetime. Now you kids get off my lawn.