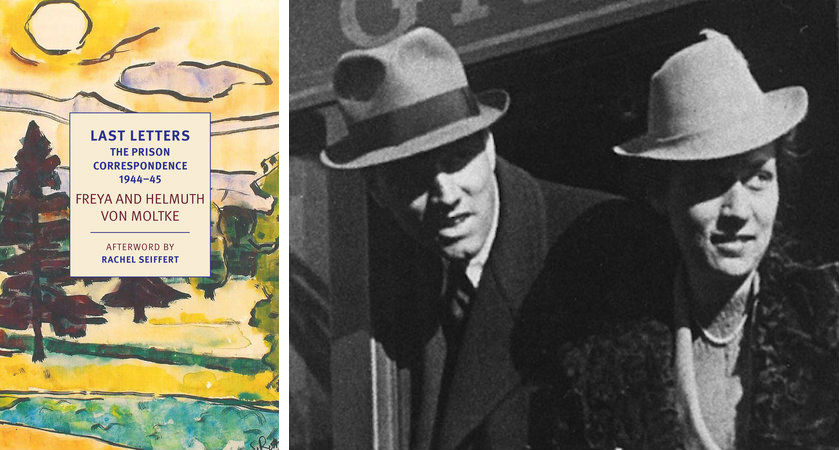 “We are only here because of Harald Poelchau, the prison chaplain who risked his own life to smuggle these letters back and forth to my grandparents,” says author Johannes von Moltke. “There is no other way that my grandmother would have gotten these letters and been able to keep them the rest of her life.”

The messages von Moltke refers to are the heart of Last Letters: The Prison Correspondence Between Helmuth James and Freya von Moltke, 1944-45, which contains the intimate notes between German Resistance fighters in World War II. The book is published in English for the first time thanks to von Moltke, his sister Dorothea, his uncle Helmuth, and translator Shelley Frisch.

Late in 1944, Freya von Moltke waited at home while her husband Helmuth James von Moltke was being held in a Berlin prison, awaiting his trial for his part in the Kreisau Circle, one of the crucial Resistance groups in Germany. In the months leading up to Helmuth’s execution in January 1945, the two exchanged heartfelt, moving letters about their lives and love for each other. Poelchau risked his safety daily to smuggle these writings in and out of the prison.

Dr. von Moltke, now a professor of German and film at the University of Michigan, says his grandmother always had the letters with her.

“She took them to the family estate in Poland and hid them in a beehive so the Nazis couldn’t get to them," he says. But "she never wanted them to be public during her lifetime. … [T]hey were too personal to her, too intimate. She agreed that we could publish them after her death. Right after she passed, we found the very last letter [from Helmuth] in her nightstand, where she apparently always kept it.”

After Freya’s death, von Moltke’s mother and uncle edited the letters into a book for a German publication that came out in 2011. Two years later, they abridged the book and released it again. Both the Polish and the English versions were based on that version.

“My sister and I felt the responsibility to get involved after our father passed away," von Moltke says. "We both had advanced degrees in German studies and both work with language [Dorothea is a bookseller in Princeton, New Jersey]. We were incredibly fortunate to find Shelley to be our translator. … [W]e discussed every line together, carefully weighing each word and detail in the language. We feel that both voices [of our grandparents] come across clearly.”

At times, Last Letters reads like both a historical document and a romance. It provides details of everyday life in Berlin toward the end of the second world war.

“When Freya describes leaving the place where she was staying and going across the city … she was going against this stream of fleeing refugees from the Red Army, walking this enormous, bombed-out city," von Moltke says. "She would just go out into the lion’s den, talking to high-ranking Nazis, fearlessly making the case for her husband’s life without jeopardizing the Resistance … and then go back home at the end of it. … [I]t’s pretty unbelievable.”

Von Moltke says he was always aware of the existence of the letters and his grandparents’ powerful love story. “It would have been impossible not to know about it. … [W]e grew up knowing that both of my grandfathers were heroes … both were Resistance fighters who died because of their brave work. In fact, that is how my parents met -- their parents knew each other in the Resistance.”

While von Moltke heard a lot of stories about his paternal grandfather’s life, “I learned a lot more doing this project. I came to understand what he actively did in his efforts to resist. I was surprised to learn how much he worked to warn and save Jews from persecution in Germany and Denmark. On one hand, I felt like I got to know better the stories I grew up with but also got to know the person much better, too. … [R]eading the openness of these letters, how raw they were in some ways, made my grandfather much more human.”

Von Moltke grew up in very close contact with his grandmother, who eventually settled in Vermont.

“We spent summers and Christmases with her at her home," he says. "One Christmas, the whole family saw Valkerie and then went back to Grandma’s house to talk about it. We were discussing whether or not Hollywood should even be allowed to tell such complicated historical stories when my grandma spoke up. She very clearly said, ‘Better that the story exists than that it isn’t told at all’. Her feeling all her life was that she wanted to get the story out about the German Resistance because there is not much knowledge about it.”

And that story is getting out thanks to Last Letters, which has seen readings in New York and London. “We have had extremely interested audiences, all generations asking great questions about the issues that were at stake,” von Moltke says.

The afterword touches on the importance of the foundations of democracy, how important the institutions are and the responsibility to uphold due process.

“My grandfather’s letters talk about his sham trial that was held prior to his execution," von Moltke says. "One of the things he concluded was that if one was not to the liking of the judge, then the person would be found guilty of high treason. When we see this kind of erosion of the very foundations of a justice system, then it becomes extremely important to resist. If these letters provide any inspiration for people to act to uphold our democratic institution and to not to let subtle erosion keep us from acting, then they serve their purpose.”