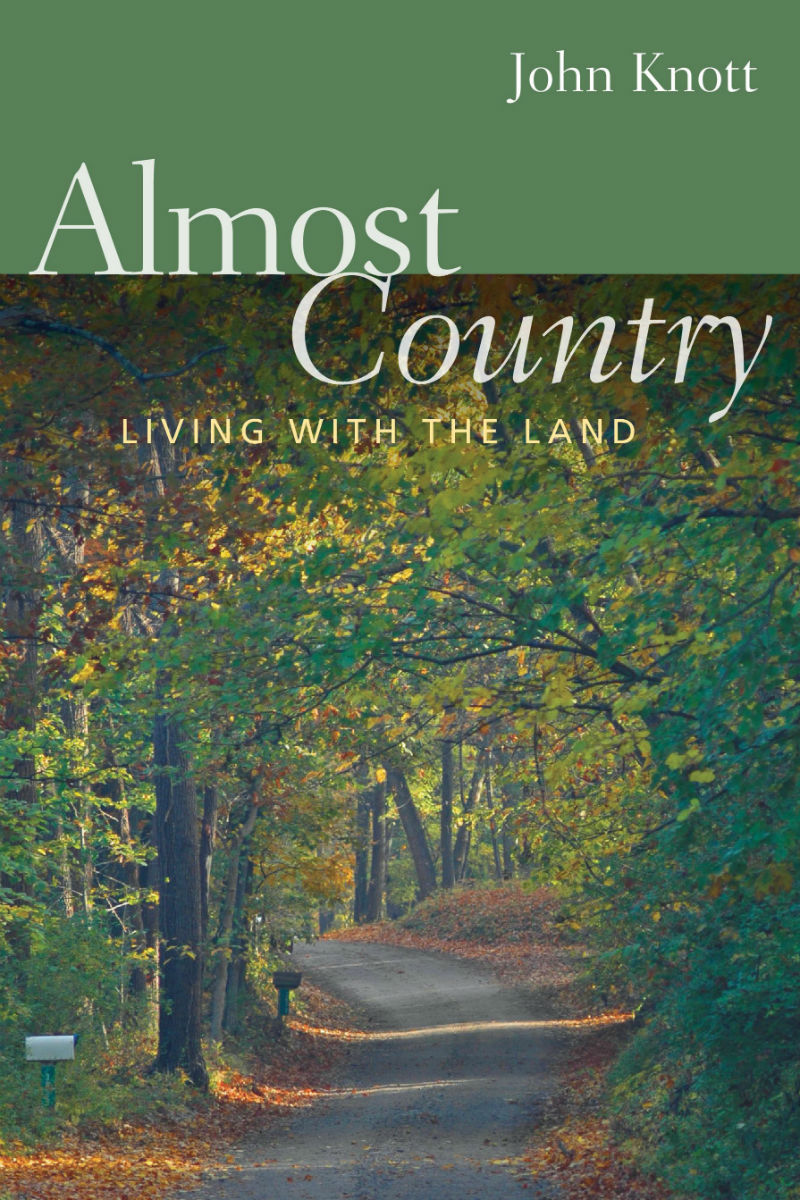 Occasionally you get a good look inside another life. It could be seeing a career other than your own. It could be hearing about a trip to a place where you’ve never been. It could also be learning about a distinct lifestyle chosen by another person.

John Knott’s new book, Almost Country: Living With the Land, reveals the latter. In this 147-page self-published collection of nonfiction essays, he outlines his experiences with building and living in a home in the woods outside of Ann Arbor with his wife, Anne. Anyone with an interest in construction, wildlife, ecology, native plants, and trees, land ethics, local politics, and stories about ways of living might appreciate these essays.

Their house was situated on about three acres near the Huron River and just far enough outside of the city that they experienced a closer connection to the natural world while still enjoying a quick drive to Ann Arbor. As Knott writes, “We would find ourselves learning to appreciate darkness and quiet more absolute than anything we had experienced in town.”

The Knotts moved to their home in Scio Township in 1992 after their children left the house and as a way to pursue their interest in environmental issues. In 2006, Knott retired from the University of Michigan, where he taught and led in academic administration and is now Professor Emeritus of English. He focused on English Renaissance literature before turning his attention to literature and the environment.

One recurring thread throughout Almost Country is the question of how to maintain a landscape. The Knotts made a strong effort to give preference to native plants. Striking a balance between aesthetic and ecological principles presented both a challenge and goal for them, as Knott contemplates the question, “Restoration to what baseline?” in the book.

The struggle against invasive species never really ends, and he notes, “I’ve come to think of our efforts to push back the invasives as part of the process of negotiating our relationship with the land, though I wonder what leverage we really have.” These views on land management are complemented by details about what species that the Knotts protected and cultivated, like redbuds and dogwoods, or actively discouraged and removed, like Asian honeysuckle and autumn olive.

Knott also draws on thoughts and writings by well-known nature writers, such as Robert Frost, Mary Oliver, and Henry David Thoreau. The last essay includes the delightful surprise of a quote from a personal letter by Oliver to the Knotts. These references inform and ground Knott’s interactions with the natural world, as he is in conversation with their writings and also forms his own viewpoints based on experience. Knott’s writing flows between such references, his own thoughts, and true accounts in the fashion of nature writing, and the narrative offers a thoughtful balance of Knott’s reflections and personal stories.

The Knotts lived in their home for 27 years and the book concludes with their plans to downsize and move to the condominium where they live now. Knott, also an amateur photographer, included some black and white photographs in the essays.

I interviewed Knott following his reading at Nicola’s Books on November 3, 2019.

Q: How did you come to live and work in Ann Arbor? What compels you to stay here?
A: An attractive job offer from the University of Michigan’s English Department brought us to Ann Arbor in the summer of 1967. We moved from Cambridge, Massachusetts, where I was teaching at Harvard after getting my Ph.D. in English there. We like the scale of Ann Arbor and the great variety of opportunities it offers and have never seriously considered leaving. Among other things, we found it a good place to raise our four children.

Q: What made you decide to write a book about your years living in your rural home?
A: I was persuaded by Helen Hill, the founder of a long-running writing group sponsored by OLLI [Osher Lifelong Learning Institute], that the essays I had been writing about life on Tubbs Road could become a book. I had thought of my primary audience for essays of the sort I was writing -- beyond the writing group -- as family and a few friends and had not considered trying to publish them. I realized that with some rewriting and a few additions they might be worth sharing with a wider audience.

Q: How did you go about self-publishing Almost Country then?
A: I initially signed up with Lulu.com, which specializes in self-publishing, and formatted the manuscript according to their specifications. I found myself thwarted early on, however, by a faceless “Content Evaluation Department” preoccupied with the possibilities for libel or invasion of privacy. I accepted some suggested changes but balked at others I found unwarranted, and the process broke down. On the advice of friends, I turned to a local designer, Mike Savitski, and a printer in Grand Rapids, Color House Graphics. Both did highly professional work. Mike Savitski did a terrific job with the cover and suggested appropriate type fonts, always giving me a choice. He also did a better job than I could have of converting color photographs to black and white. At Color House Graphics, I worked with a project manager who was always available to answer questions and was responsive to any concerns I had.

Q: In Almost Country, you include intriguing and humorous stories, ranging from a bullfrog living in the basement floor drain to the challenges of losing power and living on a dirt road. Did you write from memory or from notes kept over the years? Are there any stories that you considered including but left out? If so, what are they?
A: In the case of most essays, I worked from memory, though for some I had the presence of mind to jot down notes so that I could reconstruct dialogue or the sequence of events involved. My wife, Anne, in addition to being an astute editor, could be counted on to supply details I had forgotten. I left out one essay about our children’s and grandchildren’s experience of the house that I probably should have included.

Q: As for what it was like to live there, you write, “I like living on a road that’s not simply a way to get somewhere else in a hurry.” Taking more time to be observant can be quite valuable to notice things and have an active inner life, yet it can feel counterintuitive or unproductive when there is much to do. You also note, “It’s one thing to be alert to one’s natural environment in vacation mode and another for such alertness to become a part of daily life.” What was the transition to a slower, more nature-focused way of life like when you moved to this home? Did you have to consciously slow down, or did it happen naturally?
A: Paying more attention to our environment came naturally for the most part. There was much to discover, and I found myself increasingly interested in the natural cycles I observed: when the various wildflowers and flowering trees bloomed, how vernal pools appeared in the spring, when we could expect to see the year’s fawns. One year, I resolved to take a walk on the property or the road every day and record my impressions. I kept this practice up pretty well until I began to slack off in the fall.

Q: The book starts with the construction of your home and ends with your plans to move out to a place requiring less maintenance. The essays also show a transition from being new to country life to having become familiar with the landscape and developing new views on how to manage land in regard to native and nonnative plants. Tell us about this shift. What is the most significant thing you learned?
A: I learned many things from the experience of living on a country road, including the necessity of getting involved in township politics to defend what we and other residents valued about the road and the semi-rural character of the area. Perhaps the most significant thing we learned was how much sustained effort it took to maintain our property the way my wife and I wanted to: establishing and keeping up paths, doing what we could to check the spread of invasives, planting trees and transplanting ferns and wildflowers, trying to fend off the deer. I felt that we were continuously negotiating our relationship with a dynamic natural world. At some point, feeling our age, we concluded that we were losing the battle and no longer had the energy or the will to work on the property the way we had, rewarding as this had been.

Q: How was your experience leaving your beloved house and land? What’s next?
A: Shortly before we moved, I found myself going around the house focusing on the features I most liked and absorbing the views from its many windows, storing up visual memories. I also relished more than ever the familiar drive up Tubbs Road from the river, becoming prematurely nostalgic. Once we were caught up in the hectic business of moving, however, I thought only of what life would be like in our new condominium. My wife and I both were surprised by our anticipation of the pleasures of discovery. We realized that we were beginning a new phase of our lives and were looking forward to it. I won’t miss the chainsaw and power mower I left behind.

According to Knott, Nicola's Books is the place to get a copy of "Almost Country"; he may sell it on Amazon at some point.