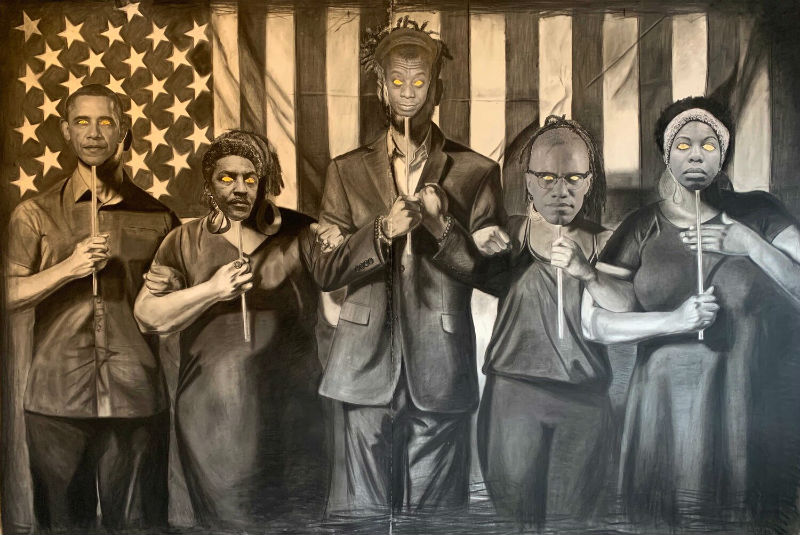 Tylonn J. Sawyer's exhibition WHITE HISTORY MONTH VOL. 1 might not seem to be made for people who ask, “Why don’t we have a White History Month when we have Black History Month?”

But people who ask that question should see this exhibit at the LSA Humanities Gallery at the University of Michigan.

Sawyer is an artist, educator, curator, and activist based in Detroit who tackles difficult questions of race and identity in American culture. He grapples with the "why don't we have" question by representing iconic African-Americans in his show devoted to “white history” by suggesting that white history is inextricably linked to black history in the U.S. He uses varied media in his explorations of identity and race, including drawings on paper, oil paintings, a soundtrack, and a short film.

His works at LSA range from monumental drawings to intimate portraits of influential black women artists. Sawyer disrupts typical histories of the Civil War and its monuments in these bodies of work by referencing the creation and destruction of monuments both in America and throughout known history. He also offers audiences new heroes through Grâce Noire, his series of charcoal and glitter portraits of black women artists, including Faith Ringgold, Kara Walker, Sydney G. James, and Tiff Massey, an interdisciplinary artist based in Detroit.

“Inspired by current trends to redact post Civil War Confederate monuments from the American landscape, Sawyer poses the question: Why are some symbols of oppression lauded, considered sacred and become canonized while others cause the public to demand their destruction? Is there a logical thread in the tapestry of oppression? Can this thread be observed and considered? Lastly, can this thread then be unraveled?”

Outside the gallery, a short film titled American Gods: N/A is looped on a flat-screen TV. The film begins with LaShaun Phoenix Moore singing “Lift Every Voice” while holding a folded American flag, performing to an empty church. The video traces Moore’s performance and alters between the song and images of subjects standing or sitting in front of the American flag. First, we see a group of five black men and women standing in a row, holding masks to their faces, then lowering them. This group is also the basis for the large charcoal drawing titled DNA. The final component of the short film is a scene of a black woman holding the lifeless body of her young son in front of the American flag. The three scenes weave in and out, creating a narrative. The pain and heartbreak of the video's subjects are visceral, yet the empty church signals that the struggle, death, and injustice faced by black communities are being sung to an absent audience.

In the gallery space, a QR code near the entrance will lead audiences to the soundtrack Sawyer made to accompany the show. The playlist is comprised of 15 tracks, including "Star-Spangled Banner" by Jimi Hendrix, "Black Man in a White World" by Michael Kiwanuka, and Mr. White by "Khruangbin," and "This Is America" by Childish Gambino. Near the windows, a small table offers related reading: Sapiens: A Brief History of Humankind, Tribe: On Homecoming and Belonging, The New Jim Crow: Mass Incarceration in the Age of Colorblindness, The Untold History of the United States, and dystopian novel Adjustment Day by Chuck Palahniuk. 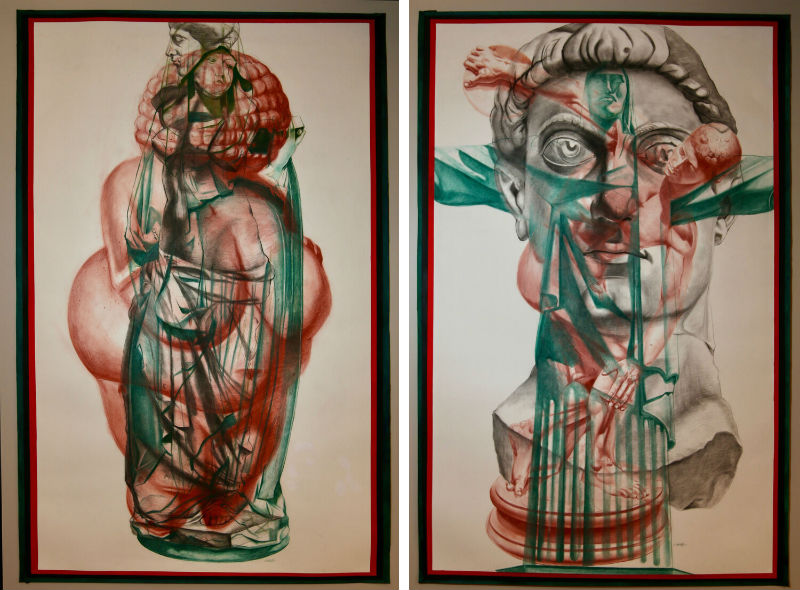 The show extends beyond the LSA Gallery and into the Osterman Common Room, where the larger-than-life drawings Strata I and Strata II hang across from the oil painting White on White: Stone Mountain. The Strata drawings reference what Krugliak describes as “the puffed up Euro-centric masculinity pervasive in classical sculpture and later post-Civil War Confederate monuments, bringing both into question.”

Strata I shows historical sculptures super-imposed on top of one another, with the Venus of Willendorf as the first layer of the drawing. This famous prehistoric Venus figure contrasts against the linear proportions of classical sculpture and questions assumptions about historically ideal physical beauty.

Strata II instead uses the Colossus of Constantine head as the base layer. Here, Sawyer draws out the strange proportions of the Roman Constantinian style, creating a commentary on the shifting perceptions of beauty in art and culture throughout time as well as drawing a parallel to the contemporary dismantling of monuments to former leaders. 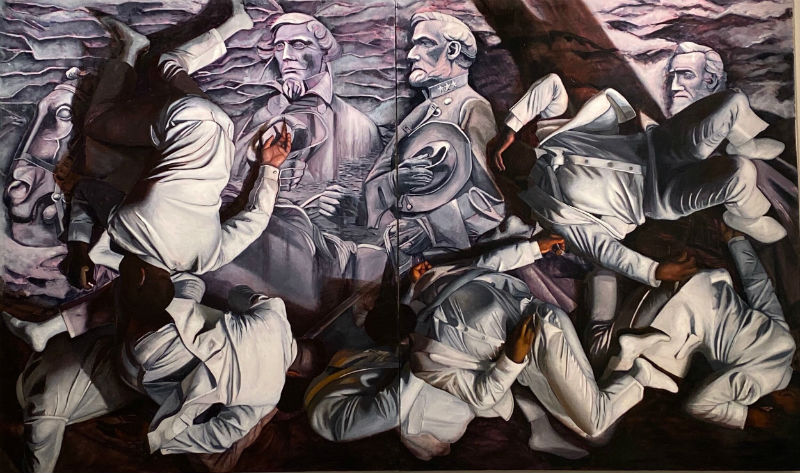 Across from the Strata drawings, White on White: Stone Mountain depicts the Civil War monument in Georgia that was among a recent group of such monuments called into question for perpetuating racist ideologies. Sawyer reframes this monument by recalling the violence perpetrated against black and African-Americans. Sawyer accomplishes this by painting his black male subjects in white suits lying in contorted positions on top of the original sculpture, each of their faces obscured.

Sawyer consistently incorporates masks in his figural work in order to interrogate “the gaze” in art. The mask is a potent symbol in art history and visual culture, and Sawyer uses it within these works to draw out numerous strings of thought. One such string is the age-old issue of power in representation. In Sawyer’s paintings and drawings, we cannot directly engage with the subject of the works. Though the subjects’ faces are obscured by masks, they stare directly at us while we are unable to return the gaze, and they have the power.

Krugliak also suggests that the masks and spliced figures common in his oil paintings can be seen as a “metaphor for double and triple consciousness.” In the large multimedia work titled DNA, Sawyer employs charcoal, collage, and gold leaf to represent five subjects against a backdrop of an American flag. They are all holding masks of famous black and African-American cultural figures over their faces, their eyes covered with gold leaf. 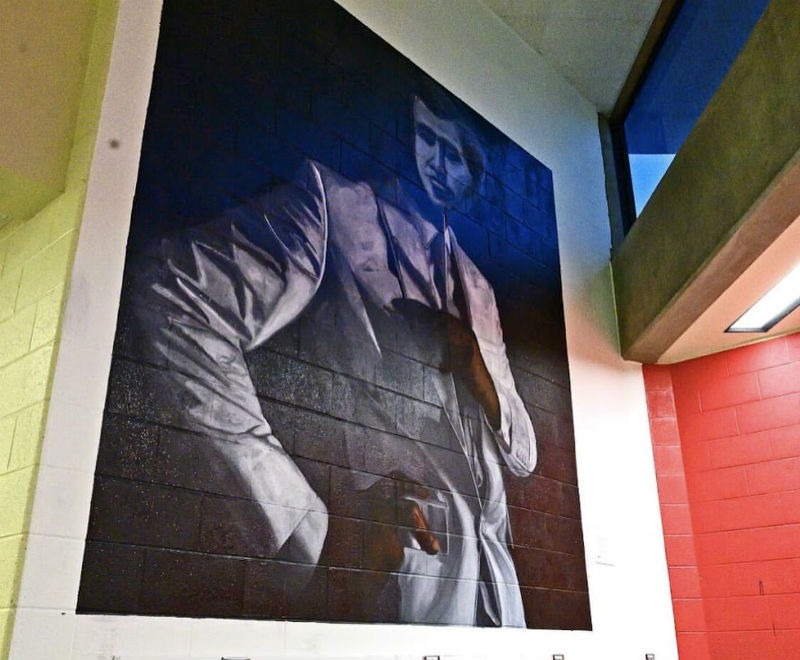 In addition to the works mentioned above, Sawyer created a mural on the first floor of the MLB for his residency, in which he “worked with U-M students to create a mural to honor Samuel C. Watson, the first African American student admitted to the University of Michigan.”

WHITE HISTORY MONTH VOL. 1 asks audiences a number of important, and sometimes uncomfortable questions. Ideally, people who ask "Why don't we have a white history month?" will able to step away from Sawyer's exhibit with a new understanding and rephrase the question: "What would a White History Month look like if we consider American history through different lenses?"

Sawyer provides them -- and us -- with a solid answer.