The Cost of Joy: "A New Brain" is odd, lovable, and filled with ear candy 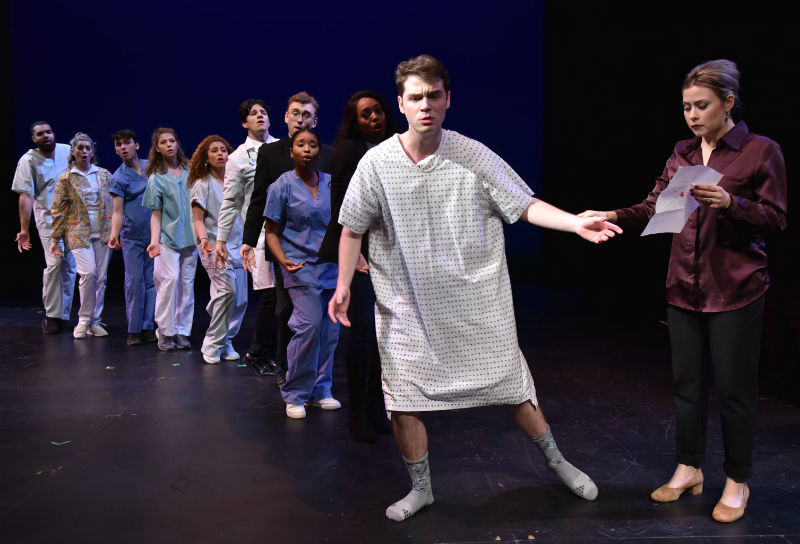 “Sometimes joy has a terrible cost" is a quintessential lyric in William Finn’s autobiographical musical, A New Brain.

And in the production staged this past weekend at the Arthur Miller Theater by the University of Michigan Department of Musical Theatre, creatively blocked composer Gordon Michael Schwinn (Jack Mastrianni) gets an existential jolt of electricity by way of an unexpected, scary brush with death.

For just as Gordon struggles mightily to write a song for a children’s television show frog named Mr. Bungee (Matthew Sanguine), he meets up with his agent and best friend Rhoda (Brianna Stoute) for lunch and suddenly loses consciousness. After various tests, a hilariously blowhard doctor (Hugh Entrekin) tells Gordon he needs a craniotomy, and this scary news sends Gordon, his mother Mimi (Madeline Eaton), and his lover Roger (Luke Bove) into an emotional tailspin.

While this may not sound upbeat and lighthearted, A New Brain -- which premiered Off-Broadway in 1998, with music and lyrics by Finn, and a book by Finn and James Lapine -- is a kind of odd, lovable, small, shaggy dog of a musical. Because the primary narrative’s series of events is markedly compact (Gordon’s collapse, diagnosis, surgery, and outcome), the 90-minute show opens its doors with some quirky turns, providing space for fanciful character tangents (like “nice nurse” Richard’s lament, “Poor, Unsuccessful and Fat”), minor characters (a homeless woman), and frog-haunted flights of hallucination and memory (“And They’re Off,” which fills in the blanks on why Gordon’s father isn’t part of the picture).

Inspired by Finn’s own arteriovenous malformation diagnosis, in the months following his Tony Award-winning success with Falsettos, A New Brain is a flawed but endearing confection. For every seeming misstep -- to name one, the homeless character never wholly justifies her sizable footprint within the show (even though Daelynn Jorif’s vocals wowed me) -- there are several brilliant little strokes of wit, surprise, and warmth.

Staged by director Mark Madama, U-M’s studio production pulsed with a sense of fun, due in large part to Commodore C. Primous III’s bright, flirty choreography. The show’s ensemble often acts as a kind of mental Greek chorus, energetically plumbing Gordon’s neurotic psyche as he makes his way through this medical crisis. Yes, U-M’s production suffered a smidge from the usual limitations of having actors of a uniformly young age playing characters at various stages of life, and there were some balance issues on opening night (between the on-stage band and the un-miked singers, as well as within the ensemble), but overall, A New Brain was often a heartwarming, sweet experience.

Two comedic highlights were Sanguine’s wry performance as an absurdly menacing and impossibly demanding frog-man as well as Entrekin’s hysterical turn as Gordon’s puffed up, overly self-assured doctor -- this is the only musical I can think of that explains a complicated medical diagnosis by way of a catchy song. Bove, meanwhile, made dreamy Roger grounded and human. And although Mastrianni’s boyish spunk slightly belied Gordon’s jaundiced persona early in the show, his lead performance held the show together nicely. This was true particularly in quieter moments, such as when Gordon makes the seemingly irrational (if artistically understandable) choice to spend the night before his dangerous surgery working on the Mr. Bungee song he can’t quite make happen instead of lying in Roger’s arms.

I must confess, this is the second time I’ve seen a production of this only occasionally revived show, which has long held a soft spot in my heart -- in part because of the irresistible ear candy that is the score (I defy you to leave while not hearing one of the songs lingering in your head). But more broadly because of Finn’s witty and warm artistic voice, the way he gave himself full permission to play (see the waitress’ ecstatically sung rendition of a restaurant’s specials), and the show’s message about the ways art can heal.

Yes, joy can have a terrible cost, as the show suggests; but that also indicates that when it does arrive, it shouldn’t be squandered.