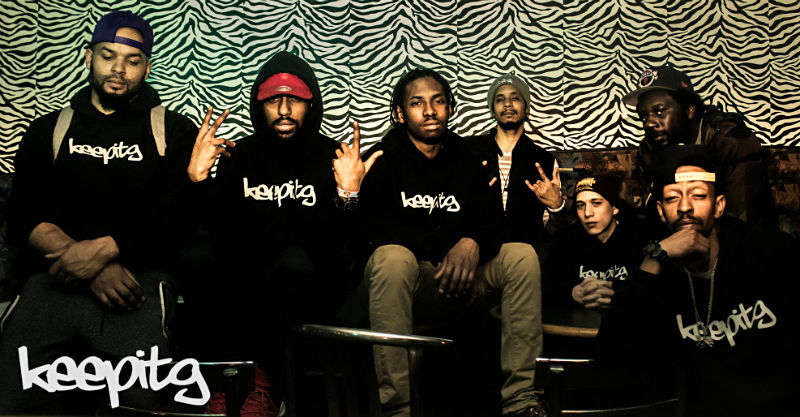 Members of KeepItG Records this summer in Detroit. Photo via Facebook.

The Ypsilanti/Ann Arbor hip-hop scene is so prolific that it feels like there's not a day that goes by that doesn't feature a new single, video, or concert from one of its artists or collectives. From the Approachable Minorities/Northern Threat Entertainment/734 Saturdays faction and Duke Newcomb's Dojo to Louis Picasso's Hiiigherminds and numerous other associations of DJs and MCs, there's been an ongoing hip-hop renaissance in Washtenaw County the past few years.

The KeepItG Records troop is among the most productive of these resolutely DIY groups -- and that's not even counting DJ Dyelow creating a beat every day of 2017. In addition to Dyelow, the crew includes producers/DJs/MCs Hi Potent C, DJ Cataclysmic, S.Delli, Aareus Jones, TwoFace Suave, and Caldane.

Many of these artists -- along with Denae, STY, Julia Furlong, and J. Donahey -- will come together on December 14 at Ziggy's in Ypsilanti for a breast cancer research fundraiser. It will also serve as something of a kickoff party for Dyelow and Hi Potent C's forthcoming album, War Medicine. The debut single, "Medicine," dropped December 5, and a new track is scheduled to be released every week until the album is fully out.

Below is a selection of 2019 videos, songs, and mixtapes by artists associated with KeepItG Records to help you play catch-up.