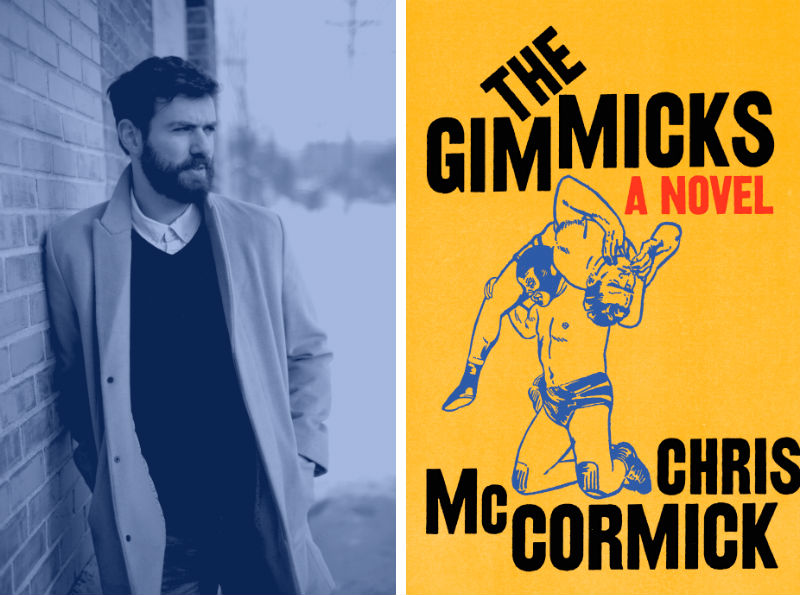 While the cover may show a picture of two opponents in a wrestling hold, The Gimmicks by Chris McCormick is about far more than matches. The novel chronicles the stories of Ruben Petrosian, Avo Gregoryan, and Mina, how their lives intersect, and how they love and hurt each other multiple times.

Each character overlaps with the others in ways that are both fortuitous and disastrous. Ruben, small and jealous, first feels envious of Mina’s backgammon luck and then goes on to seek revenge for Turkey’s denial of the Armenian Genocide with the Armenian Secret Army for the Liberation of Armenia in the 1980s. Avo, large and kind, comes to live with his cousin’s cousin Ruben and his family in 1971, gets caught up in a ploy to be a part of Mina’s backgammon success, follows a request by Ruben to go to the United States, strikes off on his own as a wrestler, and finds himself misunderstood in several situations. Mina, lucky and earnest, garners success in playing backgammon, and while her luck holds in some ways, she experiences various losses throughout her life. Terry Krill, Avo’s wrestling manager, reluctantly begins to recall his past and piece together the others’ stories 10 years after the fact in 1989.

Their converging lives are told through chapters grounded in particular times and places and through the reflections of these people. During a reunion between Mina and Avo, she tells him, “Our lives aren’t metaphors, halved or broken or split. Our lives are our lives, whole if they feel complete, whole if they feel incomplete.” Her message generalizes the agonizing challenges that they encounter. Good intentions might not be enough or allow them to fulfill their desires.

Early in the novel, Mina muses in a journal: “That the world is round makes me hope that time is round, too, and that maybe I’ll loop to the start one day.” At that unexpected reunion with Avo later, “she felt the muscles in her face mirroring his, signaling a blue smile of her own, and she knew all at once about the roundness of time.” Such parallels and recurring ideas appear throughout the book -- similes and metaphors rewarding for the reader. Another is when Mina’s husband recalls the story of his first wife and mother: "He defended one to the other with all of his heart, so that he ended up without the trust of either.” Similarly soon after, Mina accuses Avo of being caught between two people, of being "someone who confused love for something you could only loan out to one person at a time." These threads bring the characters’ stories that sprawl across time and countries together with poignant and harsh realities.

McCormick, also the author of the earlier short story collection, Desert Boys, grew up in California and graduated from the University of Michigan with an MFA. He teaches at Minnesota State University, Mankato.

McCormick visits Ann Arbor to read at Literati Bookstore on Friday, January 10, at 7 pm. I interviewed him ahead of time.

Q: Tell us about yourself and how you came to study in Ann Arbor. What was it like to move to the Midwest?
A: A big change for a California kid like me! I grew up in the Mojave Desert about an hour away from Los Angeles, where my parents had met as coworkers at Sears. My mother had immigrated from Soviet Armenia at the age of 19, and my father was born and raised in Detroit before joining the Navy and moving to Hollywood. I think my dual life, along with growing up in a place so geographically near to, but psychologically isolated from, a big city helped to develop my creativity. I played music and wrote stories, and I applied to Michigan a few years after graduating from college. Winter hit hard, but my father gave me survival tips, and I got to spend all my time reading and writing fiction, surrounded by brilliant writers, so I was happy to put up with the weather.

Q: How did earning an MFA here influence your writing? What compels you to write?
A: I love good stories and characters as much as anyone, but for me, everything has to emerge from the language itself. I always joke with my students that we wouldn’t remember Hamlet’s encounter with the ghost of his father if he had said, “Dad, is that you?” Instead, he says, “Angels and ministers of grace defend us,” and the moment is indelible, vesselled forth perfectly through the language. The MFA program helped me practice using my best language to ask meaningful questions meaningfully, to entertain, to build complex relationships, all the things I love in fiction. But probably the biggest influence the MFA had on me was the community of writers I met while I was there, many of whom are still among my closest friends.

Q: You are Armenian, and your new novel is set partly in Armenia with Armenian characters. The acknowledgments mention a grant that allowed you to travel to Armenia. How did you go about piecing Avo, Mina, and Ruben’s stories together? Had you been to Armenia before, and how did the trip influence the novel?
A: Just from the stories I grew up hearing my mother and my extended Armenian family tell, I had such a vivid -- and impossible to verify -- version of Armenia in my head. But I had never been to Armenia until last summer, and it was fascinating to compare my imagined version to the real place -- though, of course, there’s no single “real” place. Every place changes depending on who’s looking at it, and if you asked Avo and Mina and Ruben, I’m sure they’d all have different answers as to what Armenia is. But it was tremendously moving for me to visit my mother’s -- and my characters’ -- hometown, and I was definitely influenced by the trip even if the novel wasn’t.

Q: As I read The Gimmicks, I was drawn to Avo, particularly his good nature and desire to leave places. He is both a wrestler and poet. It seems like he can never have what he wants and loves. How did you develop and relate -- or not relate -- to Avo?
A: It’s funny that you say “good nature.” I’m charmed by him, too, but I also think he can be read as a cowardly character -- or maybe I just think Mina would think so. He’s someone who wants to be free but is burdened by a historical inheritance that feels like a responsibility he has to act on. While my other characters either embrace or reject that inheritance totally, he sees the value in both sides. That kind of “bothness” can be weak equivocation -- “There were good people on both sides” -- or it can be a mature understanding of the complex, ambiguous nature of the world. The novel sees Avo trying to develop from one kind of “bothness” to the other. I guess I do identify with him in that way and sympathize with him.

Q: Let’s talk more about your writing. When Ruben stumbles upon a church, he finds that "it was quiet -- not dead quiet, but the other kind, the living quiet of green things at the surface of the sea. The living quiet of blood to the ears, of memories swarming and piling and competing to be remembered.” You include metaphors and similes throughout your writing. What inspires them?
A: It’s important to me that these bursts of figurative language seem to come from inside the characters, not from the outside -- from me, that is. In this case, Ruben is experiencing this sudden quiet, after a day of noise, in a place where he is confronted by his own faith. He’s also remembering -- I don’t want to spoil anything from the book, but he’s haunted by an image in which life and death have been conflated: a literal death that has given him a new kind of life. That memory -- his memory -- makes space for and gives rise to more complex language.

Q: The Gimmicks also includes wrestling. Wrestling manager Terry Krill narrates that "if we watched a wrestling match closely enough, we could spot a devoted focus in every slam, a tenderness in every hold. It’s like one of those modern paintings. … From a distance you see violence. Up close you find love.” Why wrestling? Were you a wrestling fan before writing this novel, or did you research the sport as alluded to in the acknowledgements?
A: Like a lot of people my age, I grew up watching wrestling on TV. Although I’m not as big a fan as I was as a kid, pro wrestling still fascinates me in that the wrestlers are pantomiming violence but are in fact protecting each other with every move. The talent it takes to create that illusion -- I find it strangely moving. Wrestling also raises all sorts of questions about masculinity, brotherhood, and justice that I found relevant to my own questions, about my characters and their relationships to each other and to history.

Q: It’s a new year. What books are on your stack to read or recommend?
A: So many good books! Several of my friends from the Michigan MFA program, actually, have books coming out this year: I’ve already gotten to read -- and love -- Marcelo Hernandez Castillo’s memoir, Children of the Land, which comes out in just a few weeks; Brit Bennett’s second novel, The Vanishing Half, out in June; and Dan Hornsby’s debut novel, Via Negativa, coming in August. And I’m really looking forward to Nate Marshall’s next poetry collection, Finna, which will publish later this year. Looking beyond my Ann Arbor cohort, though: Louise Erdrich is one of the reasons I became a writer, so every new book by her is an event for me. The Night Watchman comes out in March, I think, and I can’t wait for it.

Q: You’ve written a short story collection and now a novel. What are you thinking about next?
A: Maybe a short novel! It’s too early to say, but I hope music will play a part.

Chris McCormick returns to Ann Arbor to read from "The Gimmicks" at Literati Bookstore on Friday, January 10, at 7 pm. Read a sample of the novel here.