Curiosity Cured the Cat: Dr. Howard Markel encourages readers to explore in "Literatim: Essays at the Intersections of Medicine and Culture" 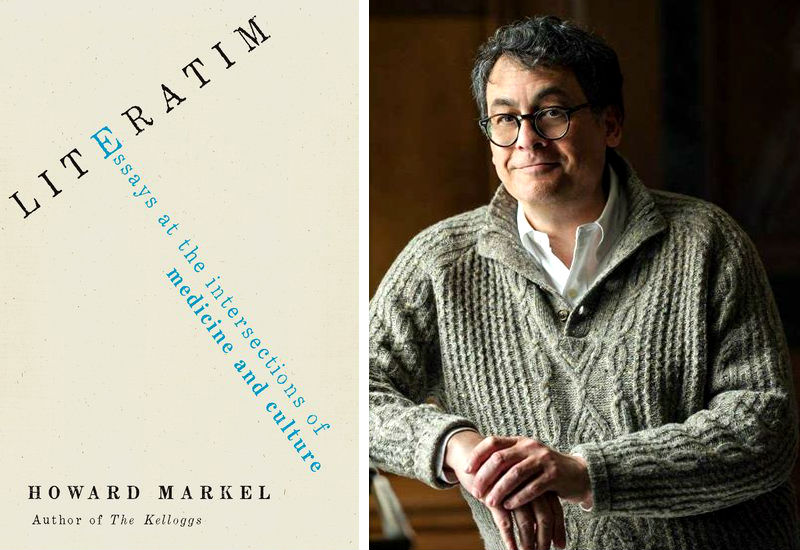 When you've been a medical journalist for decades and have written hundreds of essays and articles, it might be difficult to determine which writings to include in a collection. But Dr. Howard Markel says it wasn’t as hard as one might think to assemble Literatim: Essays at the Intersections of Medicine and Culture.

“I’ve written for a variety of places, but a lot of that has been reportage and not essays. Some articles about patients really didn’t fit either,” says Markel, who is the George E. Wantz Distinguished Professor of the History of Medicine and the director of the Center for the History of Medicine at the University of Michigan. “I wanted the book to be about medicine and how it intersects with culture, so after talking with the editor at Oxford University Press, I went and got my articles out of my file cabinet and literally put them on the floor in front of me. After I wrote the introduction, the rest came together nicely.”

In addition to writing for PBS Newshour and The New York Times, Markel has penned articles for leading medical journals. “I did an occasional column for the New England Journal of Medicine,” he says. “I had a lot of fun with those, and they led to writing a column called Literatim for the Journal of the American Medical Association and that is where the [book] title comes from.”

The collection of essays is “very much about literature and medicine, drama productions and medicine, musicals and medicine," Markel says, as well as "famous textbooks such as Osler’s The Principles and Practices of Medicine and Alice Hamilton’s Exploring the Dangerous Trades.”

Fans of Markel’s previous book, The Kellogg Brothers: The Battling Brothers of Battle Creek, will be pleased to find an essay about Dr. Kellogg in Literatim.

Markel, who begins working on his next book as soon as he finishes the last one, was intrigued by the idea of having these essays under one cover.

“I always thought it would be helpful to have them all in one place so that they are not in some forgotten journal somewhere. This forced me to reread my writings from, in some cases, decades ago -- something I usually don’t do because I’ve usually read and rewritten them so many times that I just want to move on,” he laughs.

Originally, Markel wanted to be a playwright but, he says, “I found out that I didn’t write plots very well. But I started as an English major and realized that I wanted to marry my medical and literary aspirations and discovered medical history along the way. In history, the plots are already written.”

Literatim is designed to be an easy read, something someone can read out of order, a chapter at a time, “for the enjoyment to learn about the American medical culture,” Markel says. “What I want people to learn isn’t the specific date when anesthesia was invented but rather to see an example of one person’s curiosity and where it has taken him. It has taken me to places I never dreamed of -- from the medical work in the novels of Charles Dickens to books about quarantine and addiction. …[Literatim] is an example of someone doing work they love, joyful work, following my nose to the next thing and keeping at it until I built a career for myself. ... Most everything you learn will enhance your life -- new knowledge is a wonderful thing. Stay curious -- you never know what you’re going to find.”

Dr. Howard Markel reads from "Literatim" at Nicola’s on January 16 at 7 pm.