Women of color in Washtenaw pen poetry anthology, "Love & Other Futures," as part of the Untold Stories of Liberation & Love project 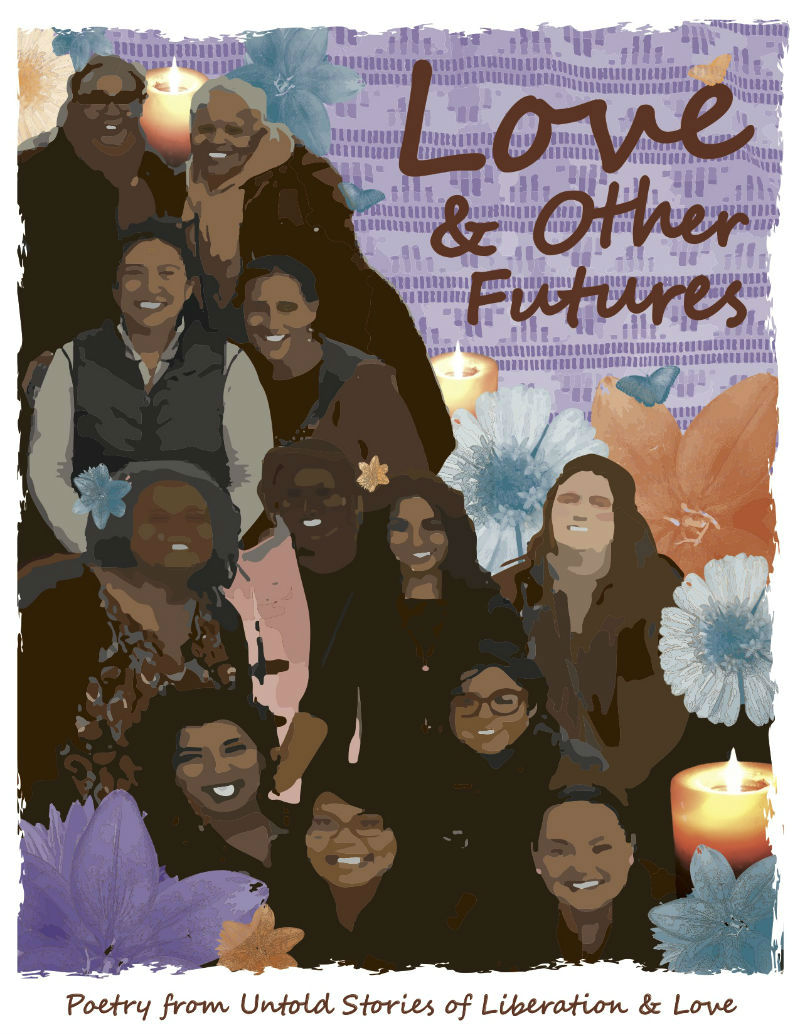 A writing space created for and led by women of color in Washtenaw County.

That’s what the five organizers of the Untold Stories of Liberation & Love project sought to build and have been creating with the help of an Ann Arbor Area Community Foundation grant. They held three Ypsilanti-based workshops with local women of color and produced a poetry anthology, Love & Other Futures, by those women in 2019.

Planning is underway for this year, the second of two years of funding. Carrying out this vision has been a means to engage in community and leadership that is deliberately disruptive to writing here.

“We’re disrupting the idea that poetry is an elite thing," said poet and organizer Julie Quiroz. "We’re disrupting the way that our society turns art into a competitive, individualistic process, rather than a way to build community. We’re challenging our county to recognize the powerful creative leadership that already exists among women of color here."

This grassroots initiative has given black, Latinx, Arab, indigenous, and Asian women a place and community in which to feel a connection with each other and to write, as well as to reimagine traditional structures around writing in ways that reflect their needs and practices. Quiroz tells the story of a black woman who said she almost didn’t come to an Untold Stories workshop. She did, however, and, in the end, she shared how she has tried as a writer here but kept encountering predominantly white spaces where she didn’t feel understood. She expressed that she instead felt seen at Untold Stories.

“The most important thing here is that women who so often feel their voices are not heard, or that they are invisiblized, feel seen and heard,” Quiroz said.

The 2019 Untold Stories workshops were organized around topics, consisting of “Mothering” in April, “Migration, Rootedness, Belonging” in May, and “Survival & Vision” in August. Poems from each workshop became a section of the book.

Quiana Perkins participated in the workshops. She currently serves as the Social Justice & Pastoral Care Coordinator at the First Unitarian Universalist Congregation of Ann Arbor and is a self-described transplant from Minneapolis. Perkins appreciated and felt grateful for these workshop subjects.

“Those are things that we live through as black and brown women but we don’t get to talk about. Mothering is expected of us, whether we’re biological mothers or community mothers or school moms or den mothers, but we don’t get to talk about it. The things that [Untold Stories was] giving us were so powerful as topics, but also knowing that it was going to be this closed, safe space was so important and so beautiful. … It let us talk about stuff that was really intimate and really personal.”

Perkins said that through these themes, the women could remember their personal narratives. Untold Stories gave Perkins a multiracial space to write, be creative, and share her creativity with fellow women of color.

“It was a blessing for me to be invited into that space because I hadn’t been able to be as creative as I wanted to be,” she said. 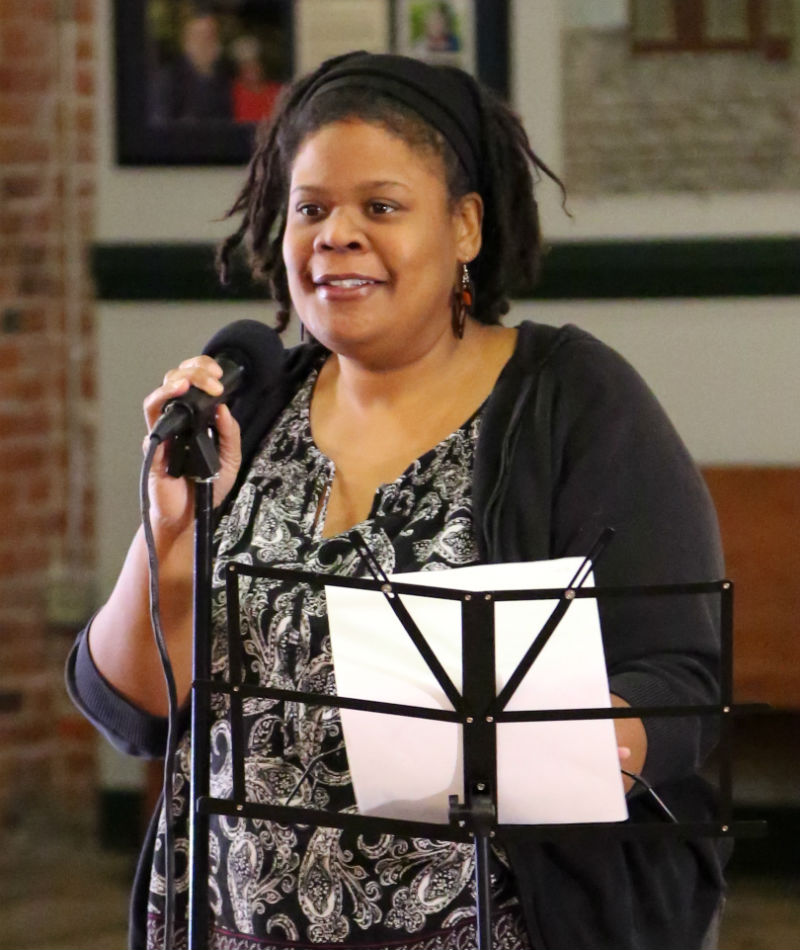 Quiana Perkins on the mic. Photo courtesy of Untold Stories of Liberation & Love.

In addition to the workshop topics, the atmosphere of the workshops and the inclusiveness of poetry in the anthology are more ways that Untold Stories disrupts writing conventions that exclude and marginalize communities of color. The organizers recognized not only the need for a writing community for women of color but also the need to support them in joining. For the workshops, the grant has allowed them to provide a venue, food, and childcare, which enable the women to participate. Perkins noted that this holistic support became key for being able to attend and write.

While speaking about the workshops with Quiroz and Pulp, Perkins said, “You all [Untold Stories' organizers] created a space that decentered white ways of writing. So it wasn’t just like, 'Come in. Here’s a journal. You should be able to write about some really serious shit.' You all were like, 'Let’s make sure your kids are safe. Have you been fed? Do you have what you need to feel nurtured in this space? Let’s think about your body. Let’s think about your spirit. And then, let’s write some stuff.' Honoring the ways that we come into writing, honoring the ways that we come into feeling safe, honoring the ways that we needed to let go of some stuff so that we could get into some stuff, is really important. I’ve been into a lot of writing communities where it is like, 'Here’s a blank journal. Tell us your life. Ta-da!' And there’s so many layers that I have to take off to get that deep, so many layers of armor that I bring into a room sometimes, and you all considered that and took us through what I considered to be a process of taking off that armor so that we could be present for each other with our words.”

The word “workshop” in its established sense is not accurate, added Quiroz. The Untold Stories workshops were constructed to create a space for writing and generate fellowship among contributors. Women could also write and share their poetry in any language that they wanted, and the book contains a section in Spanish. Each workshop included a booklet of poems by other poets, such as Audre Lorde and Joy Harjo, too.

“A lot of my inspiration I found in that space was from hearing other stories and, pointedly, hearing them in other dialects," she said. "I didn’t have to understand the language to understand the pain and the loss sometimes, or the joy that people were getting telling their story, and telling it in first language was so important to me. I needed to hear that. I needed to hear that difference, that beauty. And there’s a couple of folks who, when they read, they read in their native language. I just get so excited because I hear different things, different intonations, different curves around words, and I’m just like, 'Yes!' And that has been really powerful for me. Sometimes I get so isolated into my little black, wonderful world that I’m trying to create that I forget all the richness that’s on the other side of that that isn’t white."

Quiroz added, “You could just feel the roots of where people were coming from.”

The Untold Stories workshops and anthology have been constructed to not only be a space where women of color can connect and engage with poetry but also can share their poetry. All of the women in the workshops could have one poem per workshop in the anthology -- there was no selection process, said Quiroz. There was an application process to join the workshops. Of the around 60 participants across the three workshops, more than 25 chose to publish them in the book. Furthermore, Quiroz said that the organizers gave the decision of what the final edited version of poems would be to the poets, who could choose to accept feedback or keep the poems in their submitted form.

“Our culture makes everything a competition,” Quiroz said. Instead, “We are here to support each other and love each other and create space. We made the space welcoming, and we wanted women to walk in and feel loved.”

The distribution of Love & Other Futures, published in November 2019, is another way that the women are disrupting traditional structures, said Perkins and Quiroz. They are only selling the 64-page book in two places: Black Stone Bookstore and Cultural Center in Ypsilanti, a black-owned business, and Amazon, to offer it online and to libraries. The goals are to support a local business and enable people across the state -- and the world -- to buy a copy at cost.

“The only reason we published online is that we want the book to be bought by every library in the state of Michigan,” said Quiroz. “That’s why we went online and sold at cost. … When I think of an indigenous girl in the U.P., or a black girl in Grand Rapids, or a Latinx girl in southwest Detroit discovering that book ten years from now in their library -- yay!”

On November 14, 2019, the organizers held a release party for the anthology in Ypsilanti, where women read poems. Quiroz said, “I was amazed by the power and creativity" when they read aloud.

Quiroz lives in Ann Arbor, where she was born, and she works remotely as director of narrative and communications with the Movement Strategy Center in California, where she lived for 20 years before returning to Michigan five years ago with her daughter to be closer to extended family. Quiroz was selected to be part of the Voices of Our Nations workshops, which informed her approach to Untold Stories. One of her poems in Love & Other Futures, “Superpowers,” expresses the strength of these women:

We know how to listen

to let buried stories of pain

magnetize a compass of love

are the practices of power

Now is our time

Quiroz is among the five women who grew this project, including Ypsilanti's Maria Ibarra-Frayre and Desiraé Simmons, Ann Arbor's Tanya Reza, and Detroit's Catalina Rios. At the very beginning, it started with a poem, Quiroz said. She posted “Love After Love” by Derek Walcott on Facebook, where friends commented on it. As they conversed about it, they decided to start posting their poems online. Then, they began getting together in person.

“All of this was super organic,” Quiroz said. Since she’d moved from California and wanted a community here, she noted that another reason for creating Untold Stories was to make friends.

Those meetings evolved into Untold Stories of Liberation & Love when the group received a grant from the Ann Arbor Area Community Foundation. This grant gave them not only two years of funding but also infrastructure -- it has provided them with the resources to organize around poetry through a fiscal sponsor, Culture Source, meaning they could start developing a program right away rather than work on becoming a 501(c)(3).

Quiroz said the organizers remained volunteers. The five founders sought participants -- women of color who wouldn’t otherwise have access to writing workshops -- by word of mouth. The choice to create a print book, instead of publishing online, was to produce something tangible for the women to hold in their hands and share, said Quiroz.

Untold Stories is in its second year of funding and planning is happening now for 2020. Past participants are having an Untold Stories “strategy jam” to design the next set of workshops, which will include how mass incarceration is a part of their lives, Quiroz said. Those interested in the group can contact the organizers at liberationstories@gmail.com.