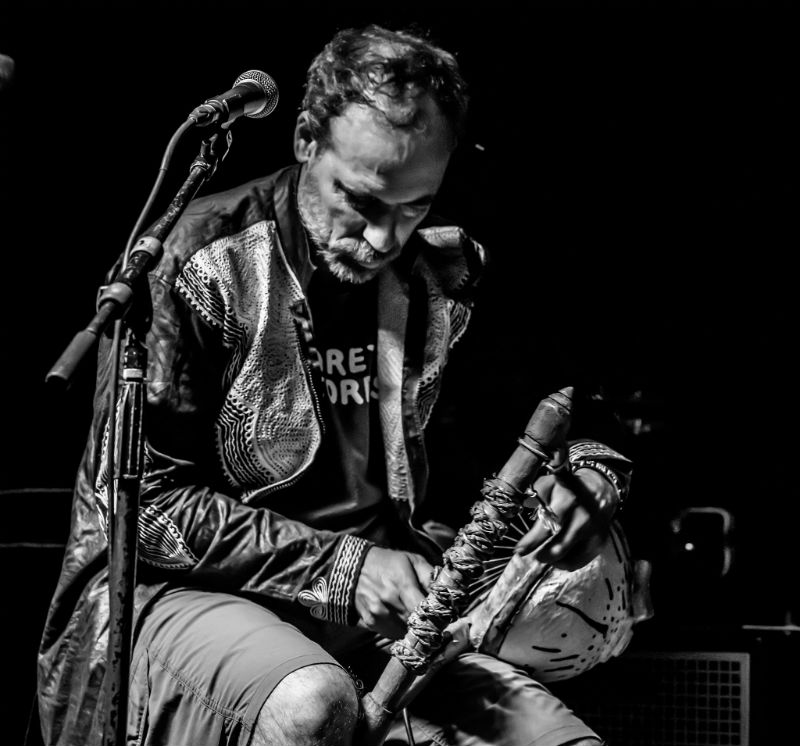 When Dr. Peter Larson found out he was going to Malawi in Southeast Africa as part of his graduate studies, one question came to his mind:

"Where's Malawi?" Larson said with a smile during an interview at the Ann Arbor District Library. "I didn't know anything about Africa."

Now an epidemiologist at the University of Michigan's Institute of Social Research, Larson later went to Nairobi, Kenya to work on public health issues. He lived there between 2014-2017 and immersed himself in the music scene.

That experience changed the trajectory of Larson's artistic life.

A longtime guitarist who played in numerous rock and noise bands since the 1990s, including 25 Suaves and Couch, Larson is also one of the people behind the experimental Bulb Records, which released the first records by Wolf Eyes and Ann Arbor native Andrew W.K.

But Larson was so enchanted the first time he heard a nyatiti -- an eight-string lyre/lute-type traditional instrument of the Luo people in Western Kenya -- he decided to learn how to play it.

"In 2015, I received an instrument from a friend and had no idea what to do with it," Larson wrote in the press release for the Nyatiti Attack LP on Dagoretti Records by his teacher, Oduor Nyagweno, who he lovingly calls Old Man. "Sometime in 2016, I saw Daniel Onyango play with his band Africa Jambo Beats in Nairobi and approached him about taking lessons. He then introduced me to the Old Man, I haven’t looked back."

Larson started Dagoretti Records to release music by Kenyan musicians and himself. But since his return to Ann Arbor, the label has expanded into free jazz with an album by Washington, D.C.'s Heart of the Ghost, and Larson is open to releasing "whatever weird music I like."

Two of Dagoretti's most recent releases -- Misiginebig by Dr. Pete Larson and his Cytotoxic Nyatiti Band and Nairobi Music by Dave Sharp Worlds with NDIO SASA -- are inspired by Kenya, but they have strong local connections, too.

Misiginebig features 2019 live recordings of Larson's ever-rotating Cytotoxic Nyatiti Band. The first side was recorded at Trinosophes in Detroit with guitarist Fred Thomas and drummer Mike List; side B was documented at Outer Limits in Hamtramck with guitarist Shelley Salant and drummer Tom Hohmann. The heart of the music is Larson's nyatiti, which offers circular melodies for the other musicians to play in, around, and with. Thomas and Salant add guitar textures and effects more common to psychedelic indie rock while percussionists List and Hohmann lock into hypnotic grooves.

"There is no beginning and end" in traditional Kenyan music, Larson said, which is why his concerts are improvised pentatonic jams, not practiced sets. "You set the tempo, you set the rhythm pattern, and then [the other musicians] join in."

That approach took a bit of getting used to when Larson was learning the nyatiti from Nyagweno, who he describes as "one of the last living elder players" of the instrument.

During lessons, "the Old Man started playing me some things and I tried to break it up into measures," like in Western music, Larson said. "The next time he would come in and start in a different place and I was like, 'OK, well, where is the beginning -- or is it the end?"

Larson eventually got it into the flow because, he said, "I started figuring out where the one is," referencing the first beat of a measure.

Bassist Sharp, who has long-led the Michigan version of his Worlds group when he's not busy booking Blue LLama Jazz Club in Ann Arbor, went to Kenya in 2017 for a visit.

"Dave came out and spent two weeks in Nairobi," Larson said, "and we recorded some music with some friends of mine," including Nairobi Music as well as the digital-only album Live at the Backyard, Nairobi, Kenya. Both records hew closer to traditional acoustic Kenyan music but with subtle tweaks, such as brief appearances of English-language singing by Larson and banjo by Colin Crowley.

"Dave had some rudimentary ideas" for the recordings, Larson said, but they were mostly improvised. "He is an absolute genius and you can put him on anything and it will just improve everything."

While the majority of Dagoretti's releases -- all terrific, all worth hearing -- have been digital-only, both Larson and Sharp's albums came out on vinyl in editions of 100. The label also recently released two 7-inches with similarly limited pressings by nyatiti player Makadem and another by Grandmaster Masese, who is one of a handful of people who plays the obokano, a massive eight-string lyre in the bass range that sounds like a swarm of bees caught in a faulty guitar amp. Both 45s are part of Dagoretti's New African Soundz Singles series, and Larson said Masese's record is likely the first recording of solo obokano music pressed on vinyl in 50 years.

"This instrument is insane," Larson said. "The first time I heard that I was like, 'This is everything I want. This is exactly what I want to hear.' It was such a strange, otherworldly sound, and when you've been involved in or listening to music for such a long time, to be shocked or surprised by even just a sound is rare."

Of course, it's all old hat in Kenya.

"It's considered a complete anachronism over there," Larson said of these Kenyan folk styles and instruments. "Young people don't want to do it because that's what their great-grandparents did. It would be just like playing ragtime here."

Larson estimates there are only about 20 nyatiti players in the world now and "two of us are foreigners," including a Japanese artist, Eriko Mukoyama, who performs as Anyango. And since Larson usually performs with his nyatiti against a psychedelic rock backdrop, the music is a few notches removed from Luo's traditional acoustic approach, which often features the singing of newsworthy lyrics about various village happenings.

When recording Nyagweno's Nyatiti Attack album, Larson said the Old Man wanted to start with a song about Barack Obama, who he claims he's related to because the former president's father was from the same village. The tune's melodic pattern is traditional and Nyagweno was "singing full, full, full blast," seemingly about the president, Larson said.

But it wasn't until Larson had the lyrics translated that he realized the "Obama" tune took a strange turn.

"It starts with some story about Tom in the village who's impotent and can't satisfy his wife," Larson said. "And his wife goes to her mother and complains about it, doesn't know what to do, and is totally distraught. Then there's some story about some of the guys having sex with all these women in the village -- and then the OId Man starts talking about Barack Obama. It's the most bizarre thing ever. Like, makes no sense."

Perhaps as much sense as running a record label in Ann Arbor, Michigan that focuses on Kenyan music.

Long may the nonsense continue.