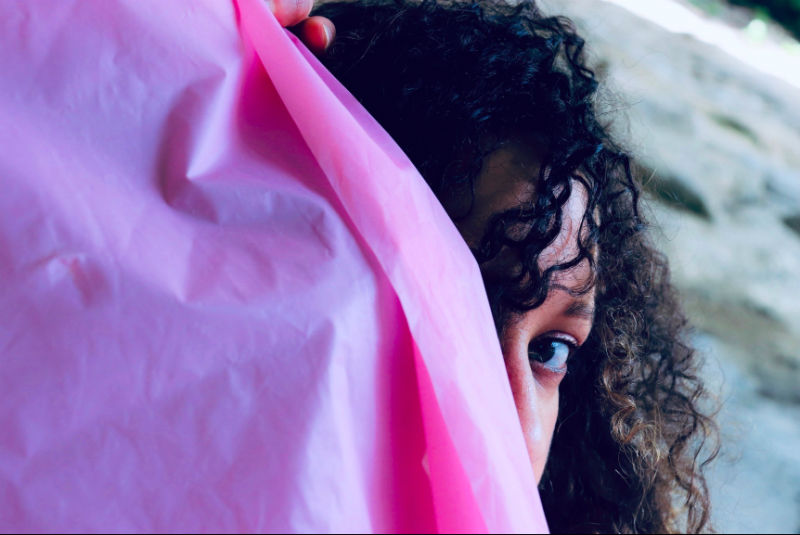 Insecurity takes many forms and shapes: visually, culturally, personally, and within communities. But what is insecurity and how can it be cultivated to produce change?

Riverside Arts Center’s Insecurity: Not Enough Again suggests it is often “a gnawing at the pit of the stomach,” a series of nagging, persistent questions: “Am I enough?” Or, “Will there be enough?”

The Ypsilanti gallery asked artists to consider what insecurity means to them while also partnering with local nonprofits and organizations to address food and housing insecurities in the Washtenaw area.

Riverside’s exhibits frequently pair with broader community organizations, and the Washtenaw County Community and Agency Fair will take place on January 25 from 12-4 pm at the Arts Center and is free to the public. Additionally, on Friday, January 18, Keena Winterzwill will appear at the galleries for a book release and signing, with performances by Jameelski of Breathe Easy Music Group, BMC, Dope Ther@py The Poet, and Joey Crues.

RckBny, a photographer and visual artist based in Detroit, exhibits a wall-collage of color photographs at the gallery to confront insecurity through repeated imagery that conceals and reveals its subjects. The photographs are clustered around a large central image of a young, dark-eyed black woman peering at the camera lens from behind a draped pink cloth. From this image, smaller, related photos spiral out to create a pictorial narrative of power in rejecting insecurities, where subjects pose with the bright fabric. The installation creates an image within these separate photographs, in which a horizon is suggested by the arrangement of the backdrop in the photograph distribution. At the top of the wall collage, the subjects stand against a cloudy blue sky, whereas images at the bottom show feet, grass, and pavement.

In his artist statement, RckBny describes his work as “inherently Afrocentric,” which “began from a need to see strong, beautiful revolutionary images of Black Art.” Instead of depicting his subjects in a state of insecurity and crisis, he is interested in imagery that portrays strong figures, wishing to show the struggles of his community through triumph rather tragedy. RckBny uses color as a thematic element to explore themes of love, community, and culture building, which he considers a unique position by which he can contribute his perspective to the broader cultural impact being enacted across the globe.

Taurus Burns frequently works with ink, marker, and gouache drawings on paper. His two pieces in the gallery aptly represent Burns’ drawing and painting style; both are dynamic ink and gouache drawings on paper. Burns is an influential, well-known Detroit-based artist, having earned his BFA from College for Creative Studies in 2002. On his website, we learn that Burns received the title “Best Local Artist" in Real Detroit Weekly and one of the “Best Local Artists to Collect” in Hour Detroit magazine. At the time he received these nods, Burns' work was comprised mostly of urban landscapes based on scenes in Detroit. His more recent works employ figural elements and engage in issues of social justice. In his artist statement, he describes his interest in creating imagery now “that address[es] issues of racism, interracial identity, the impact of dysfunction on mental health, and gun violence.”

Perhaps the most eye-catching work in the gallery is a collaborative piece by Lavinia Hanachiuc and Narooz Soliman, Untitled Yeti / A Berskerker Project, which is a mixed media, interactive stage in the back of the gallery. The stage was used for the recent Mittenfest at the end of December and continues to create an interactive space within the gallery.

In addition to the collaborative stage installation, two sculptural, wearable pieces by Lavinia Hanachiuc echo the construction of the stage. These giant papier-mâché style costumes are from her Alter Ego series.

Morgaine Tempest Fambrough contributes five multimedia works from her Crack House series. The images feature screen printing with pen and marker drawings. The artist utilizes paper texture, shape, and color as part of her compositions and draws attention to housing insecurities through her choice to represent dilapidated dwellings.

Jonathan Michael Korotko is an artist working with fiber-based sculptures. The pieces on display at Riverside are wall-hangings, 2-D yarn sculptures that feature amorphous edges, and geometric compositions that nod to Op-Art. In his statement, Korotko explains his works:

I am an artist who works with fiber in sculptural form. I begin with seemingly mundane interior spaces and domestic objects. I then draw or sketch as ways to visually and critically investigate these domestic interiors in terms of gendered power dynamics. Working with yarn and string, I wrap objects and create new skins for them, cloaking and distorting the often sexualized associations of the original. Playful hand-rendered and applied surfaces create alternative imaginations of opulence and theatricality. I want people to think about the significance of ornamentation and decoration as part of political mobilization in feminist and queer history. As a maker, I think of ways to allow people to connect to a sense of political agency and community through aesthetic form. If viewers see my objects and are drawn to them, I want the viewer to feel affirmed in their desires or fantasies. There is no shame in this.

Korotko builds with a product considered by many to be “beneath” fine art, drawing attention to insecurities artists face daily in their decision to work with a particular subject, media, or idea.

Layali Alsadah’s The Title Has Been Changing Since [My] Birth is a dark gestural painting with black paint layering over the background of the painting and appearing to erase whatever image may have been there. A single torso is visible against the stark backdrop, but it's obscured by both the top layer of dark paint and the underpainting. The figure is minimized in the composition, suggesting a loss of self and a constant refiguring and erasure of the self.

Petra Kuppers is a University of Michigan professor and “disability culture” activist whose abstract acrylic painting Cellular is on display in the gallery.

Other artists in Insecurity: Not Enough Again: Claire Moore contributed a series of nature-inspired multi-media sculptures and prints; Ron Rash is a tattoo artist based in Nevada who has a photostream on display on a flat-screen TV; plus, Amber Resseguie, King Kat, Saylem Celeste, Traci Shipley, and Helen Vachon.

Riverside Art Center’s exhibition asks us as viewers to address, call out, and confront insecurities -- within ourselves, within Ypsilanti, and within Washtenaw County. The artworks ask us difficult questions about our insecurities, but also push us to consider insecurity other than our own.

Can insecurities be uplifted through community partnership events? If the answer to the question, “Is this enough, or will it be enough?” is no, then how can we identify ways to solve inequities? How are we personally and culturally responsible for insecurity, whether it be personal, individual, or community-based?

Through the eyes of many artists and community members that brought together this exhibit, visitors can engage with these questions.

"Insecurity: Not Enough Again" is at Riverside Art Center in Ypsilanti through January 31.