Unity of Purpose: "Taking a Stand" at Stamps Gallery features a range of multimedia works under a common theme of inclusivity 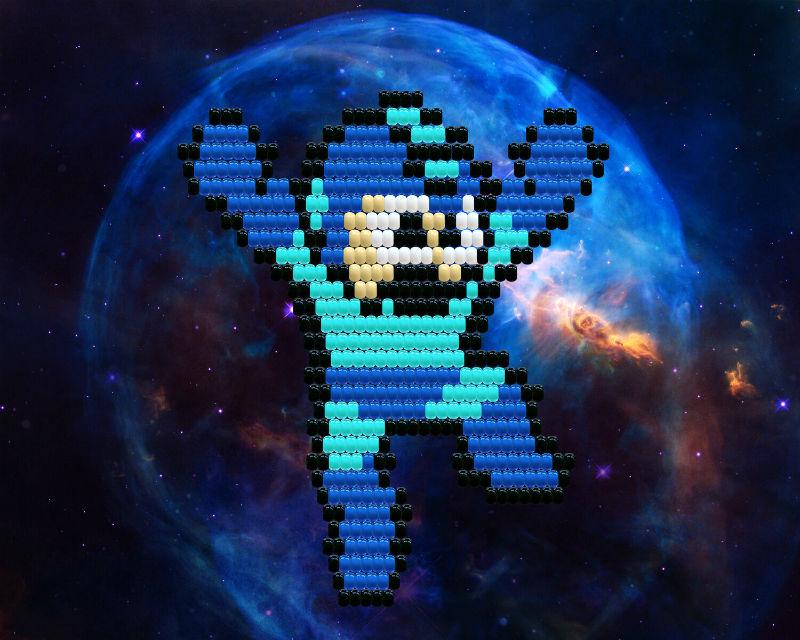 Stamps Gallery's Taking a Stand offers audiences a glimpse at the works of five artists who engage with themes of solidarity and comment on social and cultural issues at the forefront of contemporary dialogues. They grapple with science fiction, environmentalism, social activism, and the history and continuing impact of colonialism.

Executed in a range of media, the works in the gallery offer an array of involved experience and levels of engagement. Many works employ digital media, such as in Oliver Husain’s 3D film gallery and micha cárdenas’ interactive video game, while others, such as the art by Syrus Marcus Ware, appropriate traditional materials such as clothesline and clothespins as installation materials to hang letters on paper in Activist Love Letters.

cárdenas is an artist, algorithm-maker, and assistant professor of Art & Design: Games + Playable Media at the University of California, Santa Cruz. cárdenas’s interactive, technology-based installations are innovative and intriguing, including augmented reality and interactive components. In Redshift and Portalmetal, 2015, the project asks numerous, pressing questions, highlighted on the piece’s gallery wall text:

[A]s climate change forces us to travel tot he stars ad build new homes and families, how do we build on this land, where we are settlers, while working to undo colonization? The story uses space travel as a lens through which to understand the experience of migration and settlement for a trans woman of color … Roja, who’s planet’s environment is failing, so she has to travel to other worlds.

The installation is a nook, a set of walls three painted bright red, with a bright red desk placed in front of a large TV screen, mounted on the back wall. On the desk is a mousepad that allows the viewer to click through the interactive experience, presented in the “choose your own adventure” format. This work is based on the struggles of the native peoples of the Anishinaabe, Mississauga, New Credit, and Grassy Narrows territories in Ontario, with the fictional protagonist’s options paralleling the experiences of the native peoples of Ontario, with all choices leading back to a poisoned homeland. In another interactive work by cárdenas, Sin Sol/No Sun, visitors are “invited to experience a devastating environmental event” by taking hold of the shared iPad and step into the darkened, projected forest where the disaster will take place from the perspective of Auro, a “trans-Latinx artificial intelligence hologram.”

Oliver Husain is a multimedia artist and filmmaker based in Toronto. He contributes a series of works that contain a 3D film, ink drawings on paper, and watercolor works on paper. On his website, Husain describes the origins of his project: “[They] often begin with a fragment of history, a rumor, a personal encounter or a distant memory.” From there, they evolve, incorporating elements such as “dance, puppetry, costume, special effects -- to animate his research and fold the viewers into complex narrative set-ups.”

These methods are evident in the film on view toward the back of the gallery, Isla Santa Maria 3D, in a space that must be entered through a set of photographically printed curtains. Upon entering the film-viewing area, visitors will find a series of benches, each equipped with two free-standing pillars that hold 3D glasses, which should be used to watch the film. Based on a myth in which the Isla Santa Maria is “formed from the wreckage of a replica of one of Christopher Columbus’s ships, created for the World’s Columbian Exposition 1893 in Chicago,” Husain’s film and drawings combine to confront the “violent colonialist legacy of Columbus.” Husain interrogates this colonialist history not only through the narrative and myth surrounding Isla Santa Maria but through the use of “perspective drawing and stereoscopic images” in his paintings and drawings. Perspective drawing and stereoscopic images were technologically produced ways of seeing that each, in their time, made an immense and lasting impact on representation. Husain uses both compositional methods in his drawings and paintings, and the 3D film to reference stereoscopic images, which were precursors to viewfinders, and finally 3D that we know today.

Elizabeth LaPensée is a multimedia artist, designer, and writer. LaPensée is also a “researcher who creates and studies indigenous-led media such as games and comics.” She contributes works from her Bitwork Beadwork project, which is an homage to retro video games through an indigenous lens through the “digitally laid beadwork,” which “emulates 8-bit” graphics iconic to early video games. LaPensée’s works depict imagery from Pac-Man and Mega Man to Toad from Nintendo's Mario World, but each is a unique interpretation by the artist, inspired by her Anishinaabe and Métis heritage. 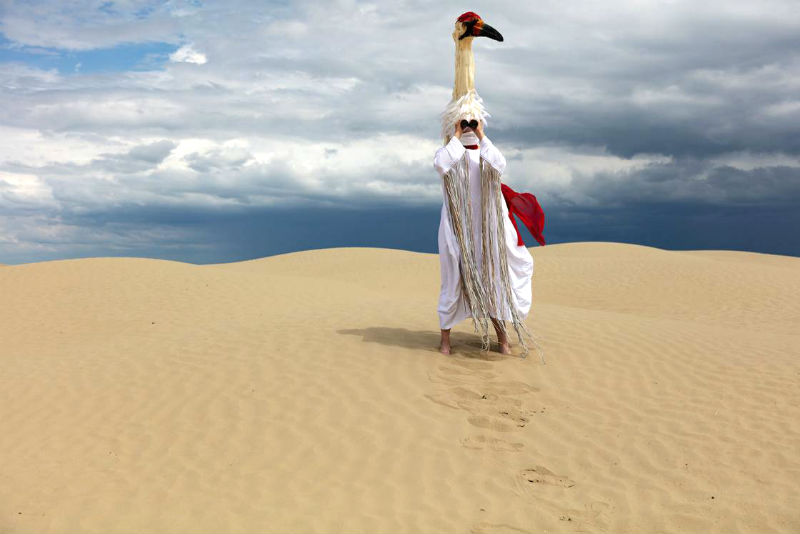 Meryl McMaster, Cartography of the Unseen, 2019, Courtesy of the artist and Stephen Bulger Gallery, Pierre-François Ouellette art contemporain and The Baldwin Gallery.

Canada's Meryl McMaster works primarily in photography, and her stunning, staged imagery is likely familiar as her Cartography of the Unseen is used in the promotional materials associated with Taking a Stand. The photo immediately suggests a narrative of colonialism. The image depicts a human subject in a bird costume peering through binoculars, standing alone in the landscape in which nothing but barren sand and sky can be seen. Her works in the gallery are part of a larger series titled As Immense As the Sky, which explores themes of time, movement, and costume. McMaster’s images are described in her bio as “incorporating the production of props, sculptural garments, and performance forming a synergy that transports the viewer out of the ordinary and into a space of contemplation and introspection.”

McMaster’s use of visual imagery, according to the gallery wall text, “draws on place-based narratives, memory, and self.” She draws from her experiences and heritage, belonging to both the Nêhiyawak community (Plains Cree) and Siksika First Nation (Alberta, Canada). The images are photographed “across ancestral sites in Saskatchewan and early settlements in Ontario and Newfoundland,” which become the stage for her interpretations of “patrimonial stories collected from relatives and community knowledge keepers.” Through these revisited and restaged narratives, McMaster questions the historical impact of colonization in these Canadian regions and beyond. 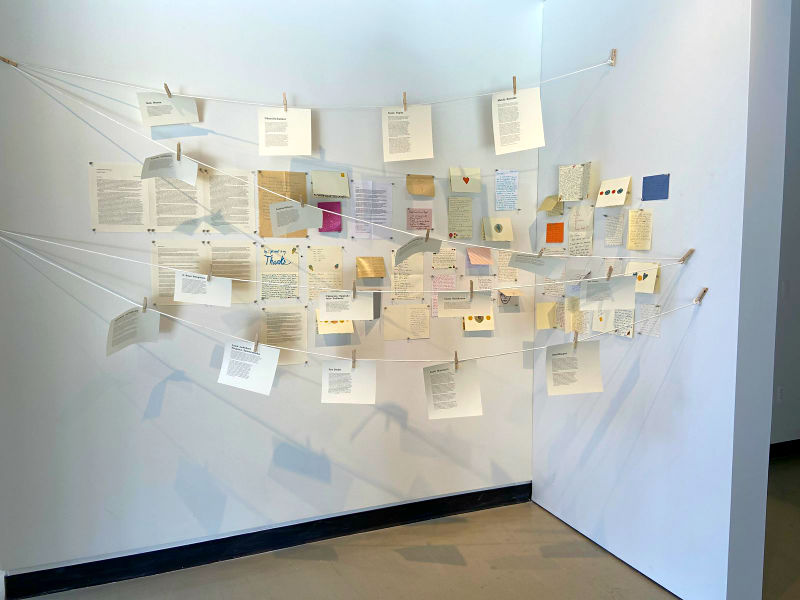 Ware contributes multimedia interactive pieces and a large drawing to the exhibit. In Activist Love Letters, Ware attempts to illuminate an often-hidden side of activism -- the letters sent between them. The crowd-based piece allows contributors to read about activists, with a red file folder containing short biographies of potential love-letter recipients, though we are invited to write to an activist of our choosing. Ware invites audience members to contribute their own love letters to activists mentioned or unmentioned, which the artist will send after the exhibition closes. Ware will also lead a participatory, performance-based version of Activist Love Letters on Friday, Feb. 7, 5-7 pm. Ware’s life-sized graphite drawing Antarctica: Marcus (Yousef Kadoura) stands adjacent to the Activist Love Letters installation and is one of a larger series of activist portraits.

Finally, the exhibit space includes the “Dialogue Room,” an open, inclusive space created in partnership with renowned creative director Ouliana Ermolova. It's a space for “gathering, contemplation, and discussion where we will host events that range from panel discussions, workshops, and performances in the gallery.” In addition to the space set aside for performances and readings, the dialogue room includes a cart of books for further reading, a pedestal with informational handouts, name tags (“Hello, my name is … / And my pronouns are …”), and a glass wall with markers for visitors to write their pronouns.

With the interactive, innovative exhibit Taking a Stand, Stamps Gallery continues to bring in programming and visual art that moves toward inviting and inclusive spaces. Curated by Srimoyee Mitra, the exhibit is in line with the gallery’s mission to display artworks that lead to a more “equitable, sustainable, and just” world.

The exhibition is also the “flagship” program, which is in partnership with U-M’s Spectrum Center, and funded by the newly-awarded Diversity, Equity & Inclusion Innovation Grant as part of The Andy Warhol Foundation for the Visual Arts.