AADL's "Music Tools Lab: Intro to Guitar Pedals" will give you a hands-on chance to sharpen your ax sounds 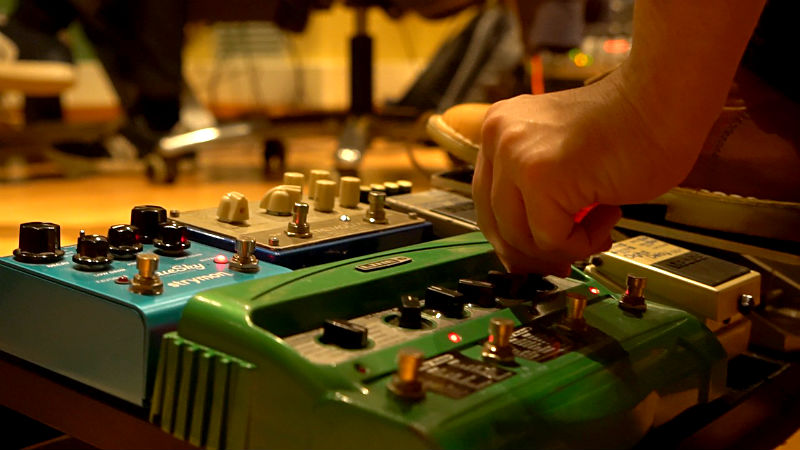 You’re at a show. Somewhere.

A band you’ve never heard of is busy hauling their gear onto the stage. The musicians fuss about adjusting amp volume, mic placement, cymbal height.

The group begins its first tune, and the guitar player, after a whisper-quiet intro in D, sends her sparkly white hollow-body Fender Mustang into a fit of feedback and fuzz, improbably multiplying every note she plays, chords modulating and warbling up and down and back and forth through the room as if she held a shattered mirror up to her amp’s speaker.

How does she do it?

Then you see something you hadn’t noticed as the band was suiting up: a garden of multicolored boxes at the guitarist’s feet. She tap-dances away at them, each stomp producing a new sonic color. Those unassuming little boxes are effect pedals, and they are the key to an infinite palette of musical experimentation.

But where did she get them?

How does she know which ones to use?

And the knobs … THE KNOBS.

Effects pedals have become a ubiquitous yet indispensable part of many modern musicians’ arsenals, yet they remain mysterious to those who may not regularly have the opportunity to give them a try. AADL has an extensive and eclectic collection of effects pedals, and you can take one (or many) home with you to enjoy as easily as you would a book.

But taking them home is the simple part. Once you have an effect pedal, what do you DO with it? How do you plug it in? What even IS it?

Add those questions to the pile of the ones you were asking the guitarist earlier and bring them to me in the Secret Lab at 6:30 pm on Thursday, February 13 for the “Intro to Guitar Pedals” Music Tools Lab. There will be a short, informative, and mind-blowing talk, during which I’ll demo each major pedal category one-by-one. After that, we’ll have a ton of AADL’s effects pedals -- along with electric guitars, basses, and amps the library lends -- for you to try, as well as the opportunity for you to get some hands-on guidance. Or, as always, you can just jam.

Here are some of my favorites that you can check out from AADL's collection: 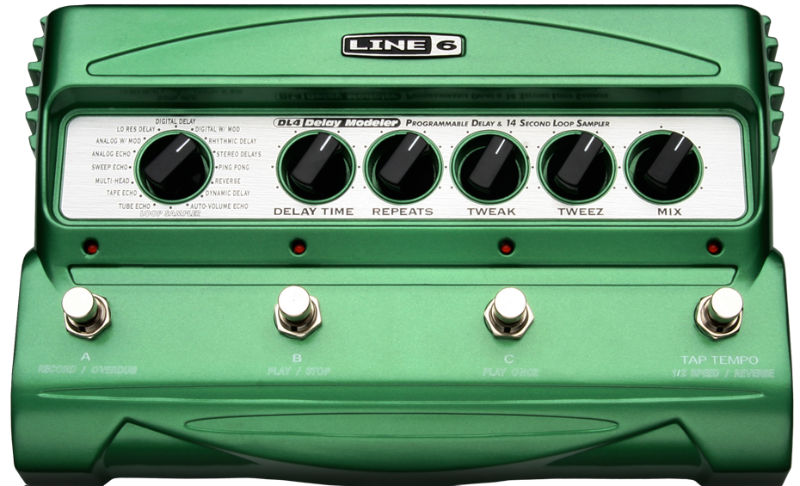 Line6 DL-4 Delay Modeler
The DL-4 was my first "major" pedal. When this THING was released in 1999, there was nothing else like it on the market. It weighed a thousand pounds, had even more knobs than that, and claimed to digitally model tons of your favorite hard-to-find analog effects pedals (unprecedented for a 1999 stompbox). More than 20 years later, musicians are drowning in multi-knobbed digital modeling pedals, most of them more highly regarded than the DL-4, but rarely do they capture the magic and intuitiveness of "The Big Green Delay." What I love about the DL-4 is that it is so easily manipulated into weirdness. The modeled delay sounds are OK (though the "Lo-Fi" delay is really good and I've struggled to get that sound out of any other delay pedal I've tried), but the real joy comes in forcing the pedal to do things it's not designed to do. Turn all the knobs to max and see what happens -- you'll probably get a much more interesting sound than whatever pedal the DL-4 is trying to emulate. Plus, the 14-second looper, while more like a sneeze compared to the half-hour looping times current pedals offer, is laid out so well (four footswitches for record/overdub, play/stop, one-shot play, and 1/2 speed/reverse) that many musicians still prefer it over those same state-of-the-art loopers. And really, if you need more than 14 seconds for your loops, you're likely putting people to sleep. But you could always try this: turn on the 1/2 speed function before you record, do your thing, turn 1/2 speed off, and you got yourself a 28-second looper. 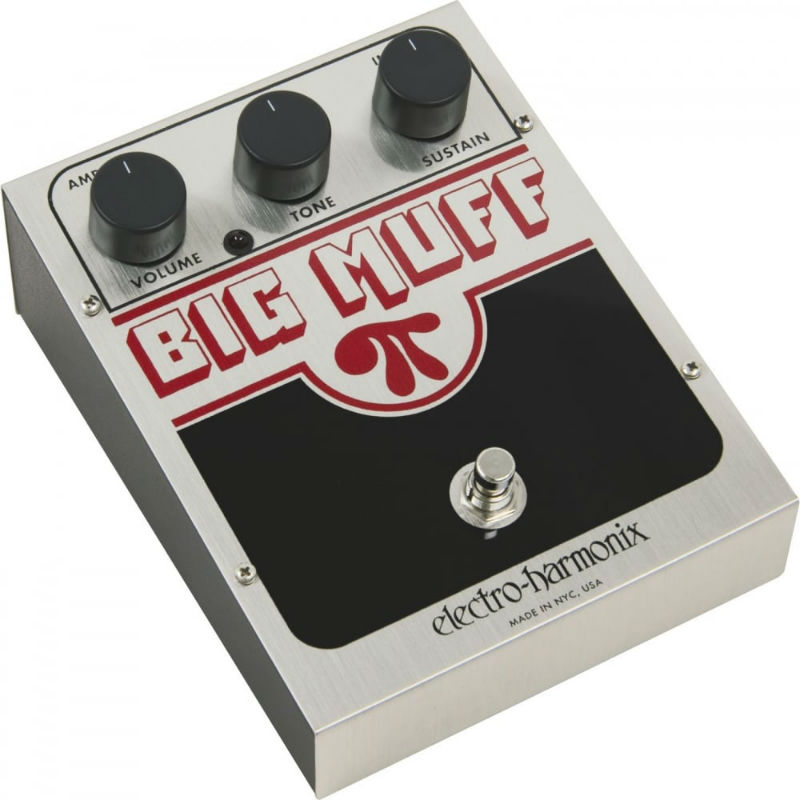 Electro-Harmonix Big Muff Pi
The Big Muff was my first stompbox. In 1999, I had $10 to my name, so I begged my step-sister to lend me $50 (I even wrote up a formal contract to pay her back, which I did) so I could drive 25 miles to the nearest guitar store and buy a Big Muff. It was the now-defunct Sovtek version, and with its patented army green paint job, it was more like a stomptank than a stompbox. What I really wanted at that time was more of a thick overdrive, something to make my 20-watt Crate amp sound like ... anything. Knowing little about effects at the time, I thought a distortion pedal is a distortion pedal. So I brought home the Big Muff, crammed it in, and ... GOOD LORD. The searing, buzzing, soaring wall of pure FUZZ. How could I possibly use this thing? Turns out, it would be about all I ever use. There have been about a billion different versions of the Big Muff since it was first released in 1969 and you can likely find one that works just right for you as well: the Triangle original for clarity, the Ram's Head for infinitely sustained solo notes, the Op-Amp for scuzzy power chords, the Germanium for a splatty take, the Civil War for more midrange, the Bass Big Muff, and the NYC for the basic big box Muff currently in production, among many others. There's no good reason not to have a Big Muff in your arsenal -- unless you don't like fun. 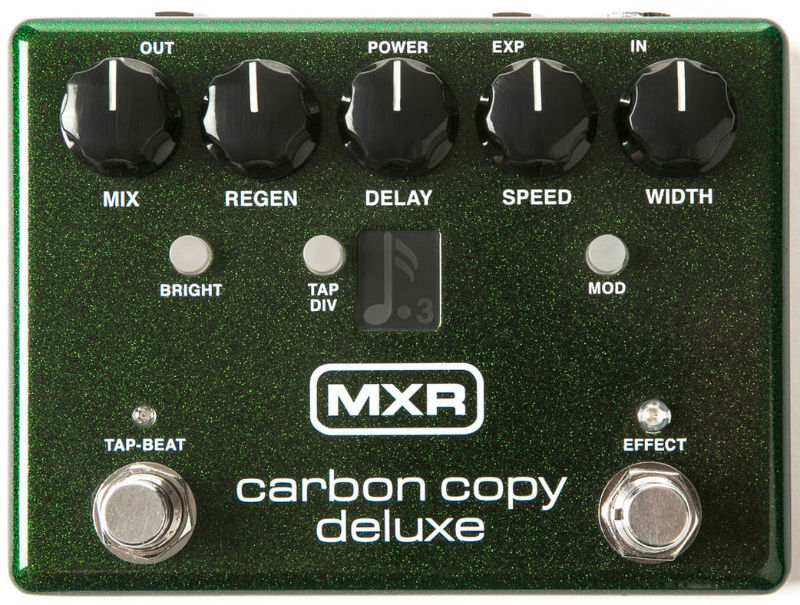 MXR Carbon Copy Analog Delay
What more do you need from a delay pedal than for your sound to repeat once or twice? As I mentioned with the DL-4, I'm not super into using actual "delay" or echo effects, but I like what you can do with them through heavy manipulation. So, if I had to pick one delay pedal for actual delay use, it would be MXR's Carbon Copy. It's tiny, easy to use, and doesn't do much more than make your signal repeat once or twice. The sweetness of its tone comes from its all-analog circuitry, as opposed to something like the DL-4's all-digital tech. Analog delays such as the Carbon Copy are built with "bucket brigade" circuits, whatever that means, and the echoes it creates come out all dark and dirty, sometimes barely representing the original sounds you put in. Don't get me wrong, digital delays (such as the BOSS DD Series), which usually give you a nice 1:1 copy of your original signal, certainly have their place. That's usually what you want from a good digital looper, and oftentimes you just want to hear your exact signal repeated for you. But with analog delays like the Carbon Copy, what you're given at the output is a little gift -- an unexpected, gritty twin or triplet, giving your sound some friggin' character. And don't forget the often-overlooked Modulation button, which will add a subtle or sickly swirl to the echoes and can even be fine-tuned if you dare to mess with the extra knobs inside the pedal. 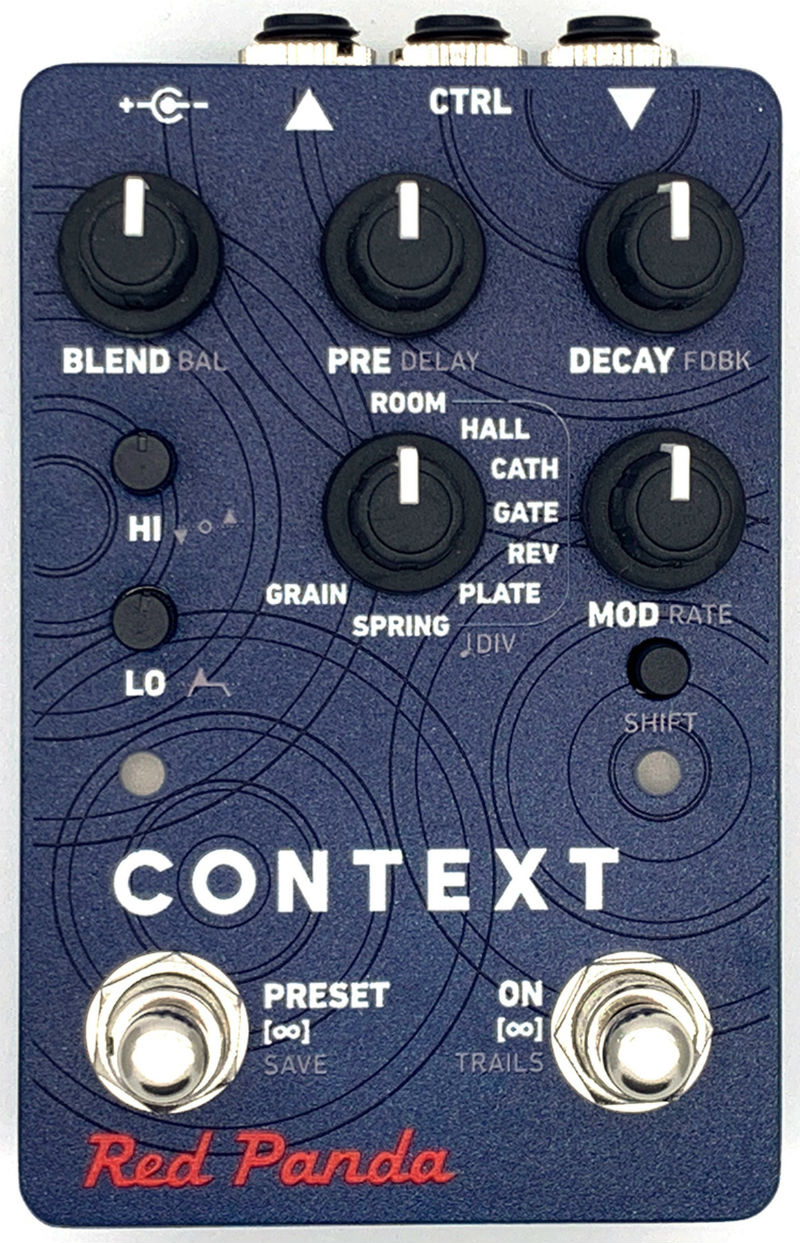 Red Panda Context Reverb
Reverb pedals are strange. It's a fairly straightforward concept: emulation of space. But there isn't a defined circuitry for how those spaces are created; it's all up to the pedal builder. The Context's builder, Red Panda, gets the spaces-in-a-box juuuuust right. It's a super simple layout with clearly defined parameter knobs, and the six selectable sounds they offer are crispy clean. They don't give you a bunch of unnecessary sound options like "Cardboard Box" or "Morgue" or the ubiquitous but barely applicable "Shimmer," just what you need. Spring for the classic Fender amp splash, Room for a wider wash of sound, Cathedral for your Sunday morning cacophony, and three other tasteful modes. And you don't have to stop at running your guitar signal through the Context. What I really like about it as that I can use it as a sort of faux echo chamber. At home, I enjoy doing jams on my 4-track tape recorder, and with a pedal like Context, I can get a passable and pleasant plate reverb going for my vocals, spring reverb for direct injection guitar, and even gated reverb on mono drum tracks if I feel like it. Though perhaps the most pleasurable use of any reverb pedal is to crank the decay to max, clang a major 7th chord, and then just dwell in it. It's a sonic shower. Or a bath, if you like to sit. (P.S. Red Panda just introduced Context V2 at Winter NAMM with some upgraded features and algorithms, but why pay $300 when you can get the V1 from your local library?)

MF Ring Minifooger by Moog
Ring modulators sound like psychedelic church bells. I love what they do, but have never really figured them out. Give one a try.

Earthquaker Devices Bit Commander
The Bit Commander can add extra pitches to your signal an octave above, below, or double below. If you want to sound like you’re playing in a band of 8-bit video game characters, here’s the pedal.

BOSS TR-2 Tremolo
You don’t wanna get too wild with your tremolo features, otherwise you lose the point. BOSS keeps it simple, giving you a smooth, tasteful take on one of the oldest effects.

Christian Anderson is a desk clerk at AADL, fronts the band The Boys Themselves, and is a member of minihorse.

Music Tools Lab: Intro to Guitar Pedals is at 6:30 pm on Thursday, February 13, in the Secret Lab at AADL's downtown location.