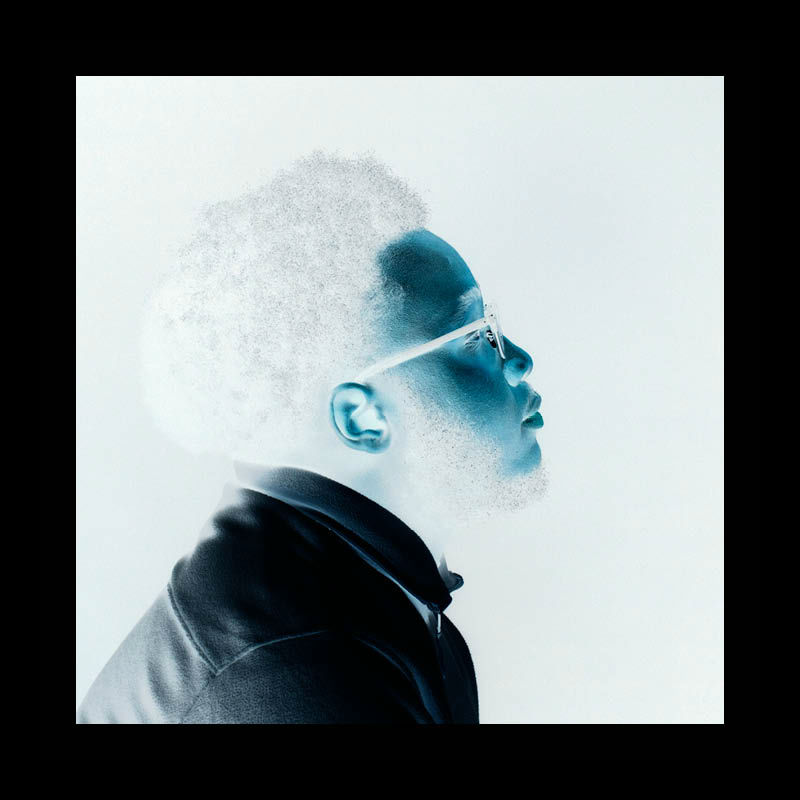 In her more representational works, Williamson first locates archival images, then begins a process of altering them with “glitter, cloth, or color to free these figures from the historical narratives they’ve been embedded into.” In the three works at Riverside, Williamson takes a nuanced approach to address her subjects, using abstraction as a means for viewers to question what the works could mean. Clues are available in the titles: Please Don’t Shoot Scroll, I Lost Control, and They Were Supposed to Take Care of Me. The colors, textures, and shapes of the scrolls stand in for the real and imagined figures that Williamson rescues, through representation, from the strictures of history, as she brings them forward for a new kind of recognition.

Azya Moore is a student at Michigan State University studying photography and oil painting, with a museum studies minor. In her digital print installation, BLUE BLACK, Moore explores “difficult issues such as race, gender, and social inequality.” Moore investigates the “notion of being Blue Black” in a photographic and poetic narrative comprised of 12 panels, some consisting only of blue text, and others with photographic imagery, all printed on dark black paper.

The panels are displayed in two rows, with six in each row. The series’ first panel reads BLUE BLACK, followed by five color-inverted photographic portraits. The second row of panels are written, poetic responses to the concept of "blue black," which, in one panel is described as having “come from the many effects of colorism and the ideologies that being whiter or lighter is better. This work seeks to explore the beauty that comes with being black and even that in which comes with being Blue Black.“ The pairing of written word with the photographs create a bold visual statement and poignantly pushes viewers to consider and push back against American beauty norms that are geared only toward white or light-skinned citizens. Moore reclaims the concept “Blue Black,” positing it as a sublime form of beauty.

Sculptor and multimedia artist Sport Jackson’s many contributions to the gallery space illustrate his immense talent with welding and 3D works. Jackson also contributes a multimedia, framed triptych painting, Treasure One. In Americans, Jackson uses two white, triangular shapes mirroring one another, with a red circle between them, suggesting a disconnected nation. His standing work, Untitled, is a metal sculpture representing organic, figural shapes holding musical instruments. Two similar aluminum sculptures titled Gifts stand framing the Untitled work, with geometric figures rather than organic overlapping. All three works suggest motion, though the Gifts sculptures contain colored acrylic pieces mimicking stained glass, which fills the negative space of the composition. In two repurposed works, titled Black America and African American, Jackson has altered old, discarded radiators into sculptures. The smaller of the two works, Black America, is a raised fist, the iconic sign of solidarity, which is associated as well with the Black Power Movement. In African American, Jackson has transformed a larger radiator into an intricate portrait that echoes styles of African masks. 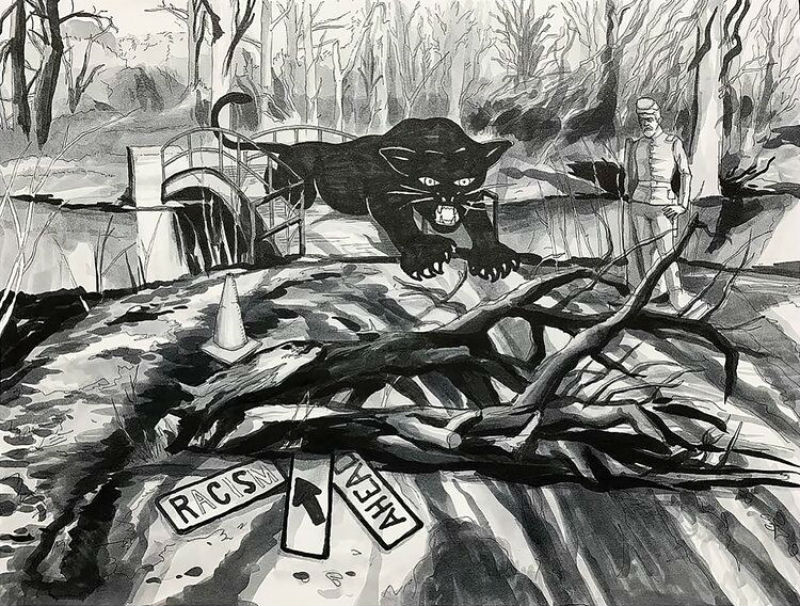 Three artists return to the gallery this month: Taurus Burns, Jason Johnson (RckBNY), and King Kat, who all showed works in Riverside’s most recent exhibit. Taurus Burns returns to Riverside Arts Gallery with a series of ink, pen, and marker drawings that explore violence experienced by the Black community in the long road to equality in America. In his artist statement, Burns says that he is interested in “issues of racism, interracial identity, the impact of dysfunction on mental health, and gun violence.” To interrogate the long history behind these contemporary issues, Burns pairs thematic iconography such as panthers, Ku Klux Klan members, confederate monuments, physical violence, and police vehicles with Goya-esque representational style. 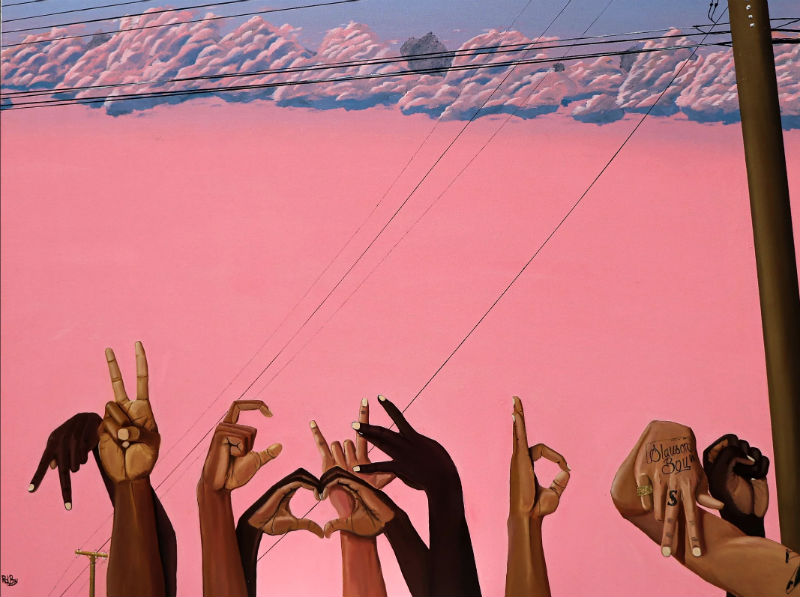 Jason Johnson aka RckBNY also returns to Riverside Arts Gallery with three large oil paintings. Last month, a photographic series exploring insecurities and identity was on display, which largely featured the color pink. In his artist statement, Johnson explains that his work “explores color and how it feels coupled with the intention of creating a world for my theories and perceptions.” Johnsons’ paintings continue his exploration of shades of pink, on top of which he paints abstracted, minimalist landscapes. In the foregrounds of the works, off-canvas figures reach, with arms and hands of varying skin tones “flipping off,” (in Restore), holding RckBNY’s logo in a surrealist skyscape (Legendary), and signing (Tribute to Neighborhood).

The third artist returning to Riverside’s North Gallery is King Kat, whose works last month included a series of digitally altered photographs. In Embrace: The Black Experience, King Kat contributes a sculptural work incorporating repurposed objects. On a pedestal, seven votive candles -- the tall, thin candles usually depicting patron saints -- stand with identical decorative sleeves. The panel design reads “Black Lives Matter,” while the top and bottom of the design is a white banner with the names of black and African-Americans who have lost their lives to violence, their names in red ink.

Timothy Short is a multimedia artist primarily working with oil paint and digital printing techniques. Short, raised in Columbus Georgia, studied fine arts with a concentration in visual art and design, and a minor in African-American studies, at Georgia State University. His works appear as tapestries comprised of oil paint and digital artwork. Through these often-dark images, Short “explores spaces of extreme darkness as the loci of metaphysical happenings.” He uses familiar scenery and domestic spaces as starting points for his compositions, then “submerging the subjects in these familiar spaces into eerily dark atmospheres,” where “the subjects as safe within the darkness -- safe from the light of policing, violent ideologies and surveillance.“ His piece at Riverside, After 1,000 Years, represents a scene-scape that appears green and lush at the top and descends into a fiery inferno at the bottom. Short’s work asks audiences to consider the trajectory of “progress” and time in his dark, complex worlds.

Other artists featuring one or two works in Embrace: The Black Experience include:

Danni Little’s installation is a hanging work that is comprised of burned sheets of paper, fiber works, and photographs that engage with themes of health, acknowledgment, and self-care. Diamond Symone contributes the larger-than-life acrylic portrait Still on the Marathon… (A tribute to Nipsey Hussle) to commemorate the rapper, who was killed in 2019 outside of his clothing store in Los Angeles. Symone paints Nipsey Hussle in black and white, while the backdrop and his clothing appear in color. Madison Cooper’s acrylic paintings African Beauty and African Roots are semi-abstract works that investigate identity with imagery of the African continent standing in for her subject’s hair. Merideth Sauve, a watercolor painter, has one small painting titled Dark Dream, an intimate, painted portrait of a young black woman.

In addition to the gallery hours, Riverside Arts Center offers community events that will bring both artists and gallery visitors a chance to engage further with the works and the often-difficult questions they raise.