Music has always been with me as I worked in my studio. Once my canvas and painting materials were prepared, I turned on my selected CD and began working on my next project.

Over the past few years the stress of the world’s and America’s political problems have followed me into my studio and the musical background became more apparent to me as I worked. I reflected on how focused I was as I sat in a concert hall and listened to and watched the music being performed. The emotional power and excitement was both relaxing and challenging to my mind and body. I thought to myself, why not try to capture in my paintings, that personal emotional energy that the music provided.

Aside each WSG gallery tag in this 13-work exhibit is a Spotify card that allows the gallery browser to dial into that painting’s musical inspiration. It’s obviously a risky tactic that can either supplement or take away from the paintings’ pictographic integrity.

During a recent interview at WSG Gallery, Ramsay set up his studio CD player and played the overture of Johannes Strauss II’s operetta “Die Fledermaus.” The overture features polkas and waltzes with sudden tempo changes foreshadowing the vocals to come in the composition. From the work’s memorable introductory three-note motif through a bridge sounded by horns and flutes leading in turn to a dance melody -- with brief reprises of themes from Acts II and III -- the overture finishes with a grand polka at its conclusion. 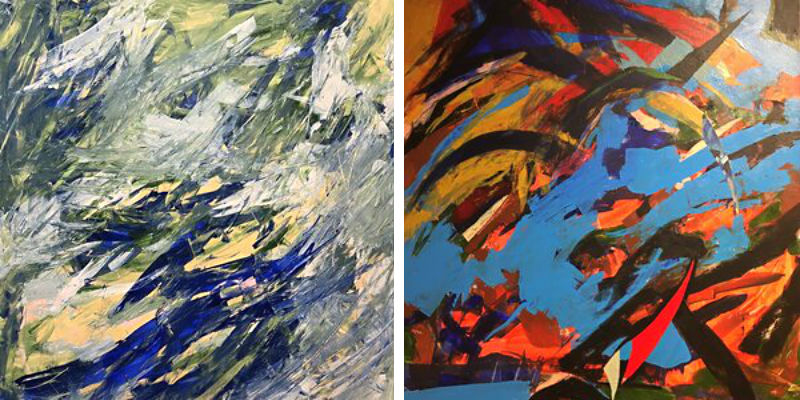 The obvious question is how well the painting inspired by composition fares in regard to the music -- and the answer is that it compares remarkably favorably. As Ramsay notes, this isn’t a matter of a longitudinal re-creation as this would seem not reasonably possible. Rather, following Ramsay’s facture, the colorful shifts of Strauss II’s motives are laid for observation through the variegated geometric overlays of his acrylics.

It’s possible to follow the succession of musical notes that build the painting’s chromatic identity while listening to the music. There are hard-edged rectangular bridges that bisect otherwise slashing curvilinear swipes. Just as Ramsay’s choice of palette seemingly is dictated by the tempo of the music itself.

Or so it seems.

It’s useful to have at least a passing familiarity with the music to see why Ramsay has done what he’s done, and there’s as much a need for deep contemplation of the paintings as there is while listening to a complex harmony.

Even without music as a guide, Ramsay conveys to viewers emotions through the use of color alone, which seems like a difficult task considering his prior emblematic expressionism. But even as a master figurative psychologist, the Visual Symphony Series process was a sort of like fumbling toward ecstasy, Ramsey writes:

As a painter, I had too much control with my conventional tools, like brushes and prepared palettes of color, so I developed spatulas from rubber, plastic and wood and special trays to hold colors.

My whole arm, rather than just my hand and wrist, was used to apply pigment to the painting surface. All my actions were [therefore] centered on applying pigment based on the emotions triggered by music. These applications were layered as the music played rather than applied in a longitudinal way as the music was performed.

Colors were selected, on the spot rather than premixed as in the past. The emotions I felt were applied with the intensity that I felt at any given second. The first time I did this type of painting, I stepped back in fright and amazement at what I had just created. It said to me something I had felt about music, but had never actually articulated in conversation or captured in a painting before.

Ramsay’s notion is more kinesthesia than synesthesia. The point being that this is not concretely seeing color through sound; rather, this is more feeling gestural color through sound. And this is indeed a differing approach to visual abstraction, which is the most trod upon territory in modern art.

The physical exercise is itself impressive. Ramsay’s acrylic on prepared wood panel or museum-grade canvas bear a variety of expressive attack. Yet they also share an impressive consistency that’s more than a mere haphazard application of pigments. There’s indeed a manner to Ramsay’s abstraction that reveals itself with examination.

Ramsay’s Visual Symphony Series is a marvelous and tuneful effort by one of Ann Arbor’s old-school artists. It’s gratifying to see him pay homage to his masters -- both visually and aurally. And at the very least -- no matter how unconventional -- it’s a marvelous way to listen to some visual art.