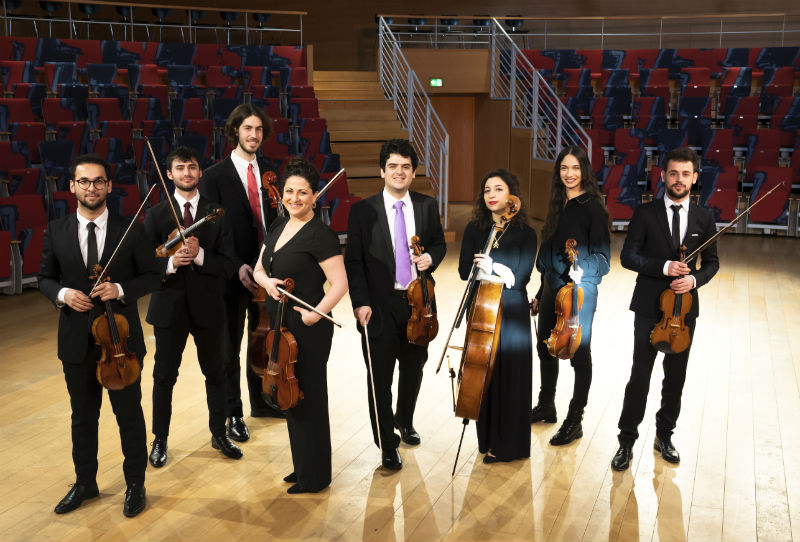 “You’re a mighty and hearty lot,” said UMS President Matthew VanBesien, peering out over the snow-dusted crowd that had slowly filtered into the seats of Rackham Auditorium Wednesday evening.

It was a lighthearted joke at the expense of those would-be concert-goers who might have filled in the empty chairs throughout the venue had they not been defeated by the weather, but it wasn’t unjustified: The snowstorm that had swept over Ann Arbor throughout the previous day and night had made navigating the roads a tricky proposition, and the spacious Rackham Auditorium looked to be more empty than not.

In introducing the concert, accordingly, VanBesien invited patrons to fill in the seats towards the front, jettisoning the assigned seating in favor of creating a more compact, less spotty-looking audience for the evening’s musical entertainment. Once condensed, it looked like the venue was maybe just under half-full, give or take a few dozen people.

Those who had braved the snowstorm had turned out to see the West-Eastern Divan Ensemble, a chamber group offering sensitive interpretations of music both old and new, but perhaps better known for the quietly political origins of their parent organization, the West-Eastern Divan Orchestra. Founded in 1999 by the famed pianist and conductor Daniel Barenboim and the Palestinian-American scholar Edward Said -- famous in numerous fields for his books Orientalism and Culture and Imperialism -- the orchestra was created as a place for musicians from throughout the Middle East (notably Isreal, Palestine, and their Arab-majority neighbors) to come together to make music on an equal basis.

Made up of an equal number of Israeli and Arab musicians, the orchestra’s political stance is rather inoffensive to most parties, at least insofar as political positions on the Arab-Israeli conflict go: Namely, the orchestra holds “the conviction that there is no military solution to the Arab-Israeli conflict, and that the destinies of Israelis and Palestinians are inextricably linked,” according to its website. Through its performances throughout the years, the orchestra has established itself as a formidable musical force, and in the fashion of many liberally minded musical groups, claims to have proven that music can “break down barriers previously considered insurmountable.”

The West-Eastern Divan Ensemble is an outgrowth of this larger organization. Headed by violinist Michael Barenboim (the son of founder Daniel Barenboim), this season marks the chamber group’s first tour. Made up of musicians drawn from the orchestra, the ensemble consists of four violinists, two violists, and two cellists. Arguably it’s instrumentation better suited to the orchestra’s stated goal of musicians coming together on an equal basis: An orchestra, after all, is made up of a large, diverse group of individuals all subordinate to a single central figure, the conductor, whose authority over the ensemble is absolute. Chamber music, on the other hand, is more of a give and take, a constant negotiation for space between the players. An ensemble made up entirely of instruments of a similar timbre is even more egalitarian in this way.

Regardless, the group opened Wednesday night’s concert with a classic of the standard repertoire, Brahms’s “Sextet No. 1 in B-flat Major, Op. 18,” one of the composer’s earlier chamber works but one of the most popular. The piece opened with a lovely, relaxed melody projecting from the cello and viola, which gradually gives way to a hint of tension in swelling chords and a melancholy, singing violin line. The rest of the movement relies on the interplay between the two moods, exchanging musical ideas with ease. It is the second movement, however -- a slow, majestic set of varieties in D minor reminiscent of a grand funeral march -- that is the most interesting part of the piece.

While a set of variations on a slow-moving, majestic chord progression may be one of Brahms’s most common tricks (one thinks of the brilliant fourth movement of his last symphony), it never fails to thrill, especially as the ensemble reaches the more energetic and stormy later variations, with 32nd note patterns running up and down the range of the instruments like a ferocious gale.

The group played even the most technically demanding sections with great facility, and most of their interpretive choices were above reproach. Moments of the music were alternately terrifying and touching, and as they proceeded through the remaining two movements -- a jovial, extremely brief scherzo and an elegant rondo -- the listener rarely found a reason to emerge from the world of the music. A few moments of questionable tuning aside, the ensemble managed to produce one of the better performances I’ve seen of this comparatively common piece.

The second half of the program was filled by a new commission from the young French composer Benjamin Attahir, whose “Jawb” for string octet proved to be the most sonically interesting piece on the program.

Composed for the ensemble, Attahir was metaphorically tight-lipped about his piece in the program notes, opting to offer a poem in lieu of a more traditional explanation of the piece, provided in both the original French and an English translation in the program booklet. Its narrator speaks of crossing lands and oceans, “never to go back,” and in its dark, travel-heavy imagery one hears echoes of the plight of refugees.

The piece itself begins with the low growl of the cellos, darkly rumbling in a manner somehow reminiscent of the opening to Shostakovich’s 11th symphony, before spiraling into bursts of anxious energy sustained by intermittent periods of stillness. The language of the piece is highly chromatic, even atonal, and evokes at different moments the music of Dutilleux, late Shostakovich, and Webern. The form of the piece was supple and organic, constructed in one movement and transitioning between different moods effortlessly. The sudden end, however, came as both a surprise and a disappointment, and one was left feeling that the music demanded a more convincing conclusion.

After a brief intermission, the second half of the concert began with a solid performance of Giuseppe Tartini’s “Violin Sonata in g minor” -- the so-called Devil’s trill sonata -- given by Barenboim, whose control over the different voices in the counterpoint was commendable. Dating from 1713, the form of this solo sonata is familiar to anyone who has encountered the more famous Bach partitas and sonatas, and this piece serves as a good example of music by one of the Baroque’s lesser-known composers, too often overshadowed by the titans Bach, Vivaldi, and Handel.

The final piece on the program was another extremely well-known composition, Felix Mendelssohn’s “Octet in E-flat Major, Op. 20.” Virtuosic for all the players involved, the Mendelssohn is perhaps the most frequently performed work in the string octet repertoire and features movements alternatingly joyful, melancholic, mischievous, and exuberant.

The West-Eastern Divan Ensemble executed even the most intricate of runs with impressive skill, and by the time the octet reached its thrilling end, the audience leaped to its feet in a standing ovation.

For those who pressed on and braved the snow, the evening proved to be well worth the trouble.