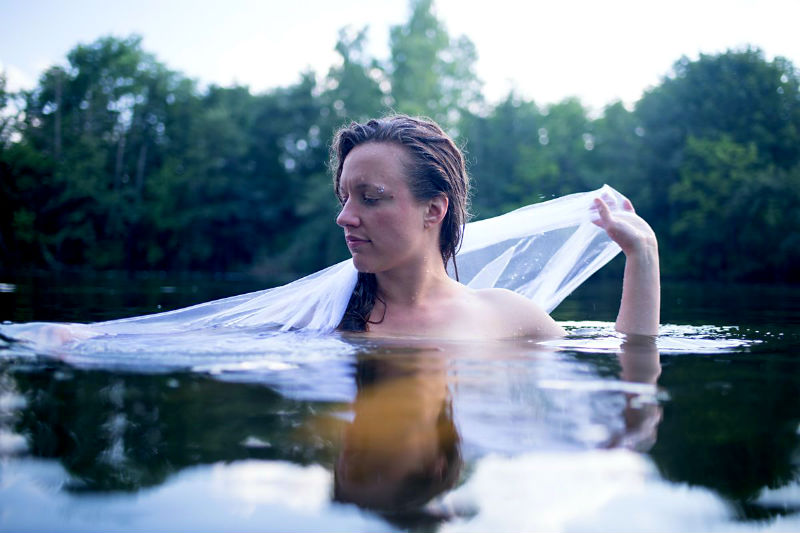 The Huron River is one of the unifying elements of the greater Ann Arbor area, so it's not surprising that it has provided inspiration to a local singer-songwriter, Kat Steih, for her recent album, Hymns of the Huron: “I’d really like to focus on using my voice as a musician to make connections between things. I’d like to advocate for holistic music/creative education, women in creative fields, and water rights.”

Steih will get to support water rights when she performs benefit for the Huron River Watershed Council on March 27 at Triple Goddess Tasting Room in Ypsilanti.

Hymns of the Huron features a fully realized sound, led by Steih’s rich, expressive voice. She’s backed on the record by Jesse Morgan, piano; Ben Lorenz, drums (who also produced); Jason Magee, guitar; and Kristin von Bernthal, bass and backup vocals. Steih wrote all the songs on the album. It opens with “Hole in My Heart,” placing sorrowful lyrics against a jaunty melody. The poppy “I Need a Friend” similarly establishes an infectious groove over a serious theme, while “I Haven’t Seen a Couple …” is a thoughtful heartbreak song. A sense of sadness and longing runs throughout much of the album, until “Don’t Push Me Away” brings in a sense of hope and “You’re Not Gonna Lose Me” concludes the record with a reassuring promise.

Q: What would you like listeners to know about your background?
A: I grew up in Michigan and lived abroad for about five years in total. I attended Washtenaw Community College and the University of Michigan. Now I teach music and play in Ann Arbor. I come from a family of German Lutheran country ministers/musicians and artists, and Irish Catholic city people/intellectuals. They all became farmers at some point, so my parents were farmers as kids. I started performing in middle school in a rock band and started writing music in college.

Q: What’s your approach to songwriting?
A: I always come up with lyrics that have a groove to them. The music comes along with it. Then, I just add another part to the song to contrast it. With this album, the songs were very simple, and the music came along with the ideas easily.

Q: You’ve titled the album Hymns of the Huron, and two of the songs, “12 House Affair” and “Don’t Push Me Away,” make strong use of river imagery. Is the Huron River a big part of your life? What draws you to it?
A: I named the album this because the songs are modern songs about real emotions, with a spiritual feel. Having a river in your town, it’s a place that everyone knows about. It’s a place that people go to punctuate experiences that they’re having. It’s a place where people go to connect with nature and with themselves, or with loved ones.

Depending on where you live in town, you’ll go to different areas of the river. Also, it’s something that we have to take care of. So, the river is a spiritual element of our town. I also think water, in general, is a beautiful symbol of life and spirituality.

Q: What are your live performances like? Do you typically play solo, or with a band? Do you play strictly original material, or do you do some covers as well?
A: I play with the same band who played on the record, as well as with the guitarist Alex Anest. I also play solo. My performances are very improvisatory, to match the energy of the room. I am always very keyed into other peoples’ emotions. It’s a blessing and a curse, but in this situation, it’s definitely a blessing.

I play one cover at this time, called “Rain and Snow,” which is an old country song. I love covers but they usually don’t make it into the set because I feel like playing my original material.

Q: What would you like folks to know about the special benefit event you’re curating in March?
A: Unity Vibration is holding a benefit concert for the Huron River Watershed Council and they asked me to play for it. I am super excited about this, because of the album being named Hymns of the Huron! I’m going to be sharing lots of cool information about the Watershed Council and I really hope people will come out, hear the album, and learn more about the Council. Shannon Lee will be opening.

Q: Do you have any other upcoming performances you can tell us about?
A: We have some performances at the Ypsi Alehouse in March and April, and then there are some more coming up in the summer. We’ll be playing at some summer and fall festivals, hooray!

”Hymns of the Huron” is available on Bandcamp and free to download for AADL cardholders. Kat Steih will perform at a benefit for the Huron River Watershed Council from 7-10 p.m. Friday, March 27 at the Unity Vibration Triple Goddess Tasting Room, 93 Ecorse Road in Ypsilanti (no advance tickets). Details here. For information on other upcoming shows, see her website or Facebook page.