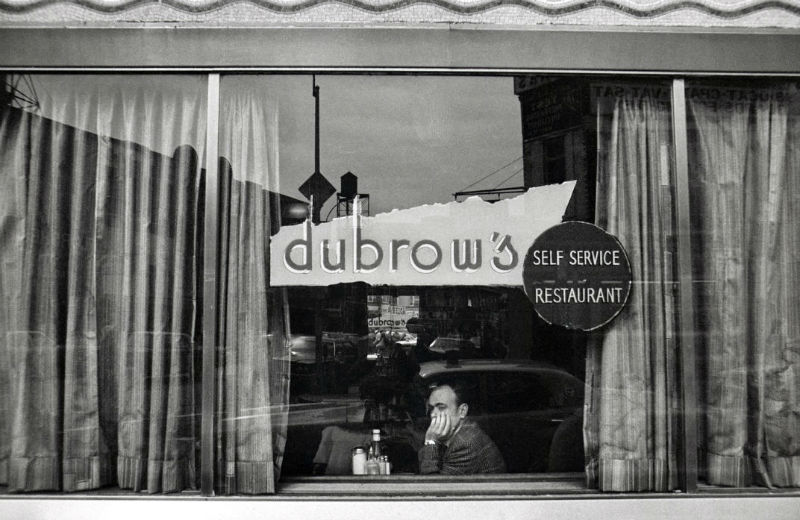 The first thing that jumps to mind when I think about New York City cafeterias is Edward Hopper's 1942 painting Nighthawks. In addition to its masterful capturing of manmade lights and nighttime shadows, many interpret the painting as a portrait of big-city loneliness. "The four anonymous and uncommunicative night owls seem as separate and remote from the viewer as they are from one another," states the proprietor of the fansite edwardhopper.net. But to me, it looks like the counter clerk is speaking with the couple, who may have had a great night out on the town based on the way they're smartly dressed, leaving the man with his back to viewers as the lone lonely one -- though the painter referred to him as "dark sinister" in his notes for the painting, not lonely.

These sorts of varied interpretations about what people are doing in eateries went through my mind as I viewed photographer Marcia Bricker Halperin's NYC's Vanished Cafeterias: 1975-1985 exhibition.

Halperin's work was on display at the University of Michigan's Lane Hall Gallery when COVID-19 closed down everything. Organized by The Institute for Research on Women and Gender, the Women’s Studies Department, the Jean and Samuel Frankel Center for Judaic Studies, and the Department of American Culture, it was originally scheduled to run January 16 to July 31, but the exhibit has moved online. The 17 black-and-white photos in the physical exhibit are interspersed with shots of the gallery setting and text panels for the online version,

While the name NYC's Vanished Cafeterias indicates Halperin went all over the city to photograph, the Brooklyn native shot at two locations, both part of the small, family-run Dubrow's chain. (She has also shot eateries in other places, such as Miami's Concord Cafeteria, not associated with Dubrow's.) As the Institute for Research on Women and Gender website states:

One particular restaurant, Dubrow’s Cafeteria in Brooklyn, was a legendary institution that served as a second home for many of the neighborhood’s elderly residents. Along with another Dubrow’s, a hub of the Garment Center, they provided a restaurant-cum-social club or “third place” for a generation of Jewish New Yorkers. New York City-based photographer Marcia Bricker Halperin documented Dubrow’s and other cafeterias in their waning days, drawn to the memorable faces and the liveliness and sorrow of urban life in that vanished world.

While Hopper's Nighthawks represents that spectrum of "liveliness and sorrow of urban life" all in one painting -- based on my interpretation, anyway -- Halperin generally captures one or the other emotions in her photos, not both simultaneously.

The lonely diner photos hit especially hard right now as most of us are -- or should be -- in some form of isolation. It also means we might be projecting our own anxieties onto the photos of those eating alone because it's entirely possible these folks are enjoying dining in solitude -- I know I do. While Halperin's photos in NYC's Vanished Cafeterias are only distantly related to Hopper's Nighthawks, I couldn't help but think of the way the painter explored how glass affects light and reflections, which Halperin plays with in several photos featuring solo diners, including the one at the top of this post and the two below: 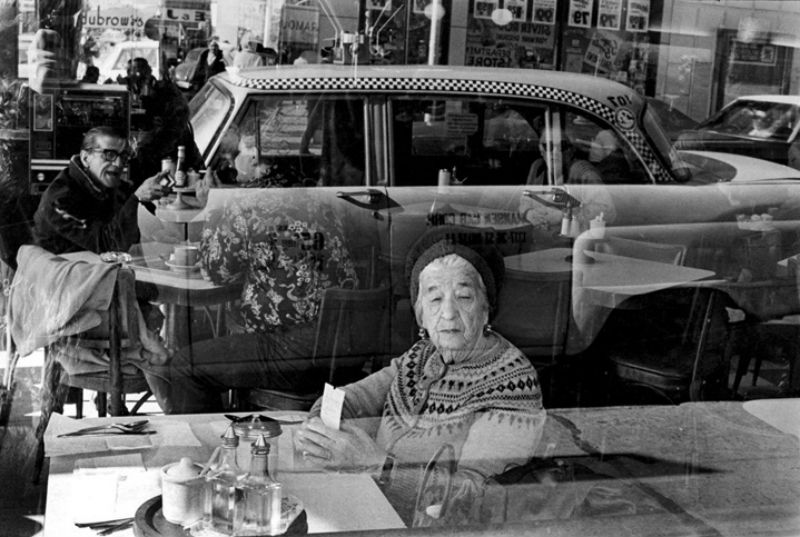 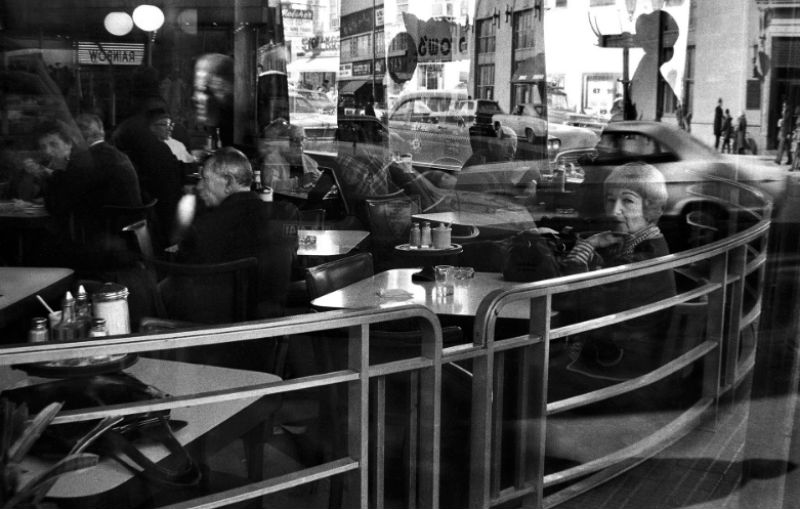 The 1975 photo below, also shot at Dubrow's in Brooklyn, doesn't appear to be a part of NYC's Vanished Cafeterias: 1975-1985; I found it on Halperin's personal site. But it also reminds me of Hopper's Nighthawks in that the man pictured has the "dark sinister" look the painter was shooting for with his solo diner. 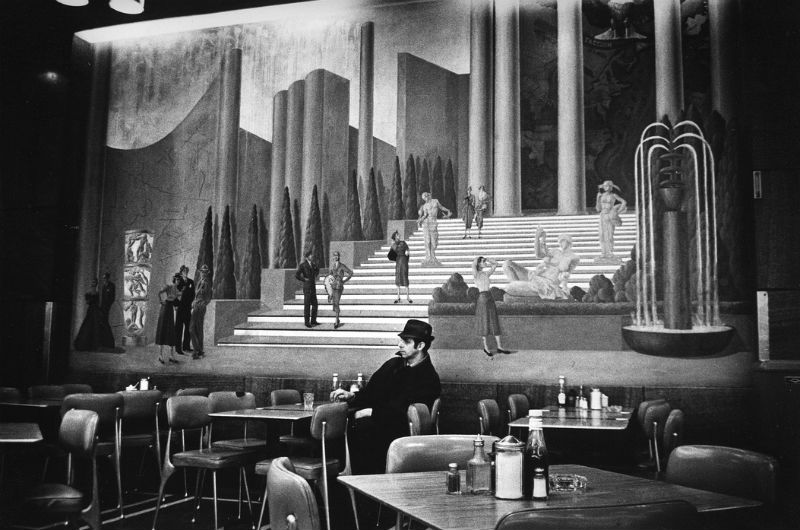 I'm focusing on Halperin's more desolate photos because, well, *gestures all around*, but most of the pics in NYC's Vanished Cafeterias feature happy groups or single portraits of diners, gussied up in their finest mid-'70s fashion and stacked hairdos. 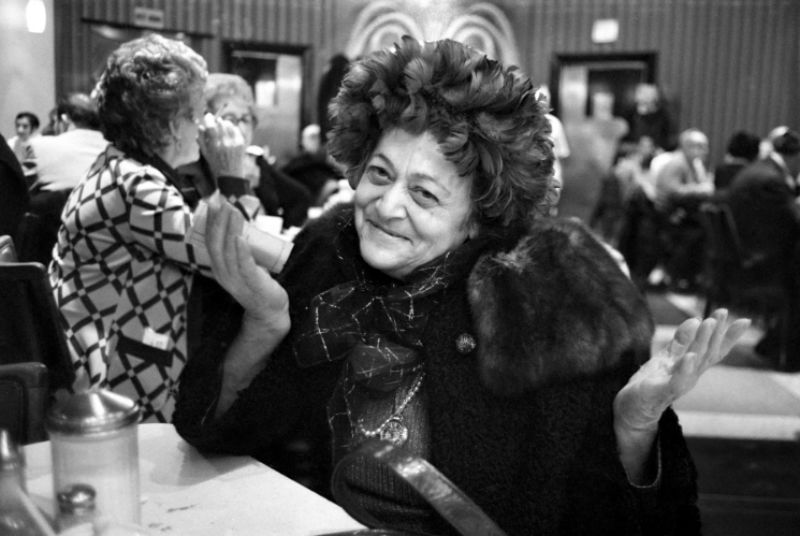 The streets of New York City were filled with hundreds of cafeterias, self-service eating establishments, during the early to mid-20th Century. Their growth paralleled the rise of the office worker, women’s evolving roles in the work force, immigration, American love of efficiency and novelty, the growth of cities, the impact of Prohibition and the Depression, the labor movement, and American eating habits. Not one cafeteria from that era remains in New York City today.

These specific types of cafeterias may no longer exist in New York City, but all five boroughs have an abundance of neighborhood restaurants and cafes that make people feel welcome, offer good food, and provide that comforting "third place" between home and the workplace. COVID-19 is battering these modern-day New York City businesses, leaving this generation of photographers -- whether professionals or Instagrammers -- as the people who may have captured these restaurants in all their pre-pandemic glory. These places are just as important to today's New Yorkers as the vanished cafeterias were to the people in Marcia Bricker Halperin's gentle, empathetic photos -- or to those four mysterious souls in Night Hawks.

Marcia Bricker Halperin's "NYC's Vanished Cafeterias: 1975-1985" is available to view at her website.