Enduring the quarantine one cell-phone game at a time 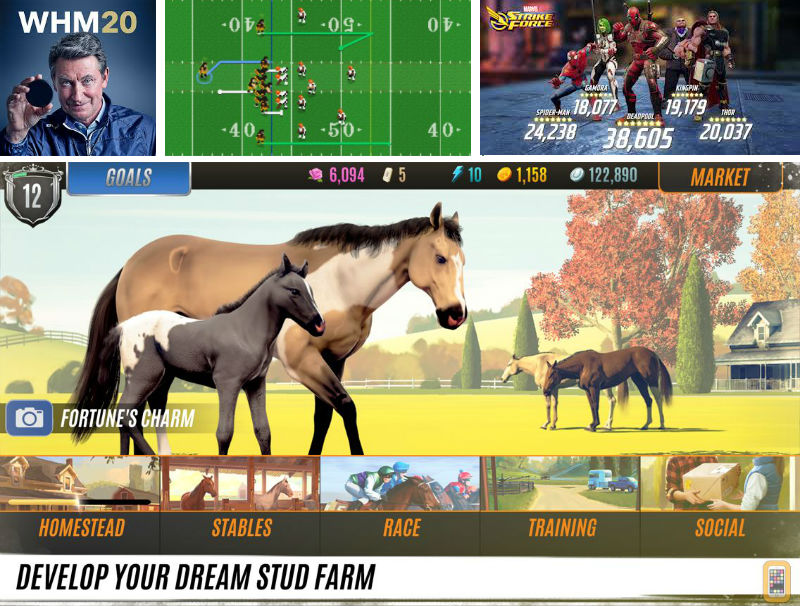 There are infinite ways we’re coping with the global pandemic -- forcing our bodies and brains to do the things we want them to (or think they should do), or giving in to surprising and unexpected forces with predictable or weird or wonderful results.

For me, some of these things include:

You know what your body and brain have asked for in the past and what you’ve given into and given it. Pre-pandemic, my body frequently wanted tasty treats and caffeine -- and frequently got it, so why would I curb those habits now?

But my brain was also asking for something unexpected to fill the downtime between working from home, parenting some kids, staying six feet away from other breathing things I’m not directly responsible for, and eating bags of chips:

The roll call of cell-phone games I’ve played in the past dates back to Snake on my old flip phone -- but it’s a short list. Some Angry Birds. Some poker app I downloaded after reading a Colson Whitehead poker book. Desert Golfing (recommend!).

That’s it. Cell phone games aren’t in my DNA the way regular video games are, so why is it that my brain waited eight days into quarantine to get me clicking and downloading and clicking some more?

Take control of your basketball team and lead them to victory in turn based tactical action. Manage your players between games by upgrading their skills and scouting for the next prospect to join your squad. Whether you’d rather control every action or watch from the sidelines, how you decide to play the game is entirely up to you!

You’re going to see a bunch of sports games on this list because I’m a washed-up former athlete (sort of?) with a background in sports PR and an interest in lots of different athletic pursuits. I also like RPGs and prefer turn-based to real-time because my brain works a little slow and I don’t need the anxiety of having a time limit to the decisions I’m about to make. If I’m going to do something stupid, I’d like a few extra seconds to think it over.

HLT challenged me to pick a team and compete against a small league of opponents. It took me a season to sign, draft, and recruit a team of outside shooters and overpower the AI with my slow-play, turn-based brain, going undefeated in season two and three -- winning two fake basketball titles and deleting the app.

Retro Bowl
Like classic Techmo Bowl, but not really like that at all. The game requires a bit of skill and coordination but wasn’t too difficult to master. It lasted a few days and a few championships on the ol' phone until I moved on to ...

Rival Stars College Football
Build your own college football dynasty, just the Treton College Fightin’ Narwhals. Turn-based gridiron action that leans heavily on play-calling probabilities and play-guessing skill. It was a long, slow, not particularly satisfying grind to a few bowl-game wins until the siren call of another Rival Stars app steered me toward ...

Rival Stars Horse Racing
I went to a horse track once in the interest of placing small amounts of money on fast horses. It turned out the track hosted a giant jazz festival the week before and they were still breaking down the stage and cleaning everything up. I wandered the facility and stumbled upon a seedy basement area with no natural light but a lot of natural people-smells -- and off-track betting. Dozens of men and a few women sat on cheap chairs at cheap tables staring at inexpensive televisions broadcasting horse races from across the country.

I bet small amounts of money on horses many hundreds of miles away and ended up cheering my head off for a horse I thought had brought me victory, before realizing it shared the same number as the real horse I had bet on at a completely different track. My real horse came in 200th place or something.

That’s the extent of my horse-racing knowledge. A much deeper well of competitive equine experience would have helped me a lot in this game, which was too complex and/or boring for me to care much about. I couldn’t get into gathering resources to build barns or breeding my horses with horses from nearby stables or, you know, the whole racing thing.

Boxing Star
Queensbury Rules go out the window in Boxing Star. Most of the fights my up-and-coming pugilist got mixed-up in were in underground locations with people who looked like video-game bosses because, well, duh. I did OK until I most certainly did not do OK. Then I moved on to ...

I Am Monster
Rampage is the best video game ever made (that statement isn’t true, even subjectively, but I sure love Rampage). This isn’t Rampage. This is kind of stupid and kind of boring. My monsters ravaged two cities before popping tanks like ripe blueberries seemed like too much work.

Rage Road
The most violent game of the lot. You’re a stick figure with a big, round head sitting in the back of a moving vehicle. Similar-looking stick figures pursue you in all manner of driving and, eventually, flying vehicles -- trying to shoot you dead. Your job is to shoot them back and stop them from coming after you. You can aim for helicopter blades, or tires, or those big, round heads. I didn’t log much time on this one.

MARVEL Strike Force: Squad RPG
Who doesn’t love the Marvel universe -- cinematic or otherwise?! You start with a squad of superhero good guys and girls and through a series of turn-based battles, defeat opponents, gain additional superhero good guys, and get to recruit some superhero bad guys and girls as well. Go on missions and capture all sorts of crystals and components and level-up until Spider-Man can web one bad guy, then chain-kick two additional bad guys for hundreds of points of damage.

I played this much longer than I should have, until I ran up against a superpowered Guardians of the Galaxy crew guarding some kind of galaxy and they beat me to a pulp time and time again.

Park Master
When you start downloading apps, all the app advertisers out there see that you’re interested in cell-phone games and, all of a sudden, your social-media feeds are clogged with tons of ads for more games. Most of them don’t pique your interest, but some, like Park Master, do.

The premise is simple: park two cars in designated spots. It’s easy at first, but then gets trickier and trickier as obstacles are inserted. This is one of those games where you need to watch ads constantly to play and I didn’t have time for that because ...

Property Brothers Home Design
If this whole library thing doesn’t work out, well, home design also won’t work out. The Property Brothers take you on the last phase of a current home renovation where you get to help redesign a living room. What seems like a simple task is more tedious than you’d ever imagine. See, you have to play this ultra-simple Candy Crush-like game of match the squares to earn coins to buy stuff. And there’s so much stuff to buy.

By the time I got to the first real clients, Debra and Steve, I was matched out. Then I learned you need to use coins to remove Debra and Steve’s old junk before you put the new, nicer junk inside. Not today, Property Brothers.

World Hockey Manager
Finally, the only game still on my phone. I downloaded this and Wayne Gretzky’s face suddenly popped up on my phone screen. If you don’t know who Mr. Gretzky is, we can’t be friends. If you do, you’ll know it’s the duty of every Canadian (which I am) to support the legends of the Commonwealth and download and play and master any game in which several studio-photoshoot-rendered images of Wayne Gretzky wearing a casual jacket with nice clothes inserted underneath.

I now manage a team in a fictional hockey league, developing fictional young talent from across the globe, while worrying about their creativity rating and screaming, "GET BACK ON D, YZERMAN!"

Rich Retyi is the marketing and communications director for AADL.