Open Your Eyes: SculptureWalk Chelsea trusts viewers to cut through the clutter and take in the art 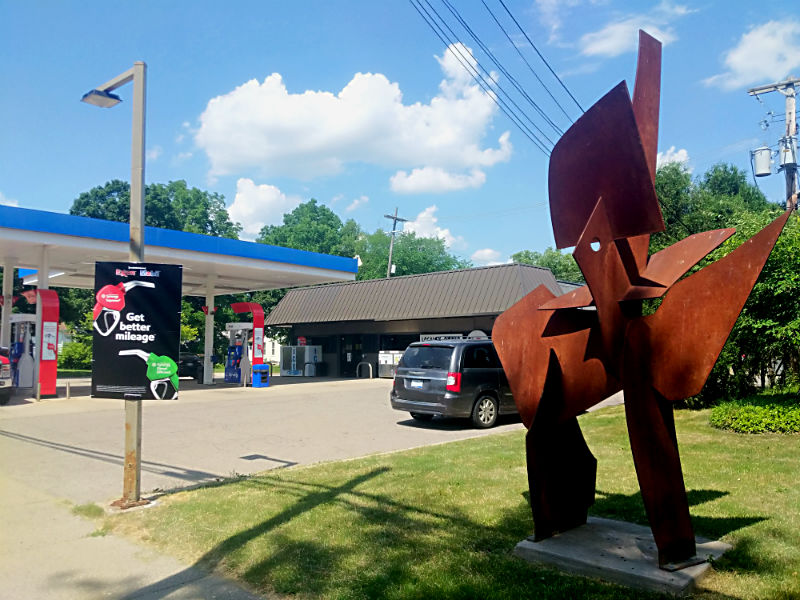 The 12th annual SculptureWalk Chelsea launched recently, and I spent a steamy Friday afternoon strolling through the downtown in search of not just art but a sense of calm and normalcy in a year that’s been anything but.

I’ve been in Michigan for almost four years, and I’ve been to Chelsea before, but I never made it to SculptureWalk. Or more accurately, since the sculpture is on display for a year, I never noticed there was sculpture on my walks.

This is a common thing with public art installations: they blend into the areas in which they’re placed, becoming part of the background with the trees and buildings. This doesn’t devalue these creations, or the communities who put in the work, time, and money to commission and display these pieces of art; it’s just a fact and one that must be overcome with purposeful viewings.

As I walked around Chelsea, I spent several minutes with the 14 creations featured in the 2020-2021 SculptureWalk, first considering them against their backgrounds -- whether a building, telephone, or the Jiffy plant -- and then narrowed my vision to the pieces themselves, ultimately finishing by focusing on the smaller details in each work.

But my mind kept returning to considering how the sculptures related to their backdrops and their placements along the walk, which stretches from M. Saffell Gardner’s Sankofa next to the Mobile Station at the corner of Main Street and Van Buren to Jeff Bohl’s Early Bird near the parking lot at Main and Buchanan Street, with several side-road stops along the way.

I guess I was less concerned about evaluating all of the sculptures -- which, reductively speaking, range from pleasant to excellent -- but rather my reactions to purposefully looking at the works after the three previous years of not even noticing them. These are some of the sculptures and scenes that stood out to me the most.

My SculptureWalk began with what the brochure map deemed the start: Gardner’s Sankofa, named after the Ghanian word representing an aphorism along the lines of “it is not taboo to fetch what is at risk of being left behind.” Surely Gardner had no idea that the work would likely only be seen up close by those who purposely fetch a view of it at risk of it being left behind for the sculptures closer to the old downtown -- but it did cross my mind once I looked up the word. (The brochure features no artist statements, so all my comments on the sculptors’ intents or their works’ meanings aren’t based on anything other than my interpretations.)

Sankofa is usually represented by a bird with its feet facing forward and its head turned back, and there are hints of a feathered creature in Saffell’s steel 12’ x 8’ x 4’ sculpture, with its large, brown, welded panels of curvilinear lines and occasional sharp angles. I explored the sculpture, which is one of the stronger ones in the exhibit, after parking in the gas station, and my first thought was, “I wish this were closer to downtown” -- even though it’s just one block from the second sculpture on the stroll and two blocks away from the edge of what feels like the start of downtown. But to catch the eyes of passive viewers who are likely in downtown Chelsea for anything but a concentrated tour of SculptureWalk, having your art centrally located is key. 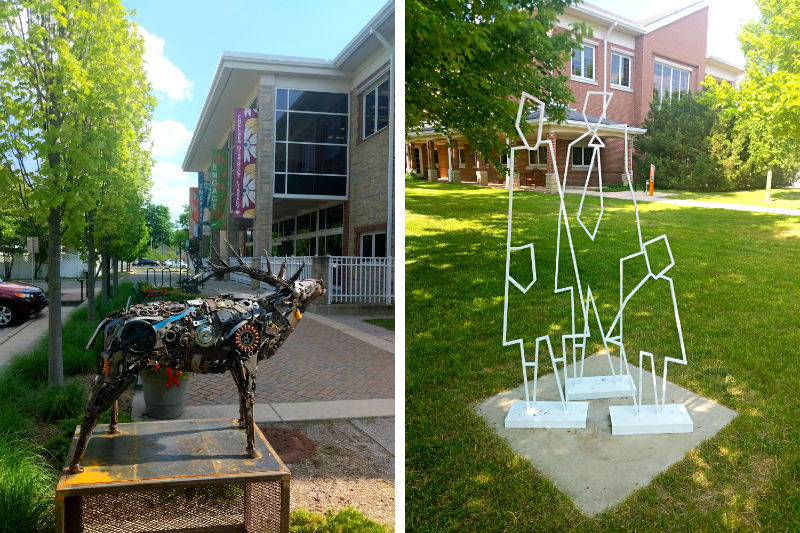 Some of the pieces in SculptureWalk seem placed in an environment and backdrop that fits the art’s image. Other sculptures don’t appear to have any relation to space in which they’ve been placed. The Chelsea District Library hosts two pieces: Kyle Burnette’s Elk Bugling in the back and Todd Kime’s Profiling in the front. Elk Bugling and the nearby Zebra Herders II by R. Mike Sohikian in front of Chelsa State Bank don't have an obvious connection to their surroundings, but that doesn’t take away from the sculptors' clever representations of the animals. But the geometric outlines that comprise Profiling show what appears to be a mother, father, and small child -- the type of folks you might see going into the library. 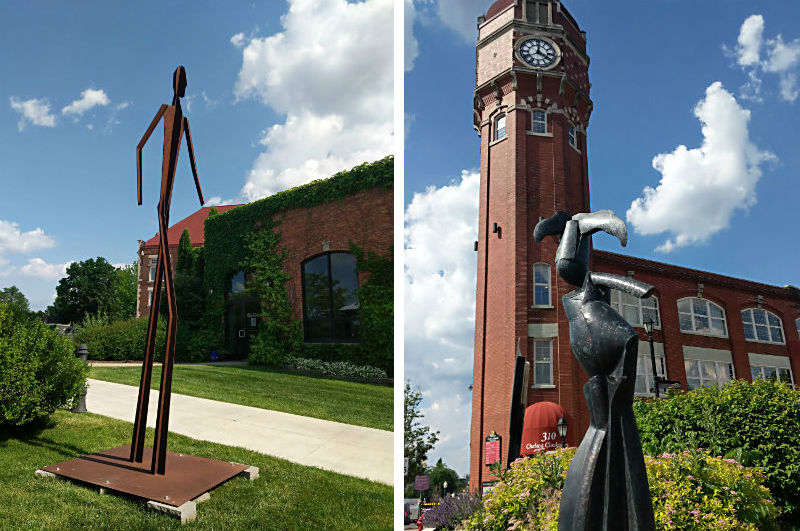 Other pieces are in locations that might not have an obvious connection to their surroundings unless you consider them from certain angles. John Merigian’s On My Way features a 13-foot-high skinny steel man walking -- perhaps he’s taking in SculptureWalk -- in a grassy area in the Clocktower Complex. But the base of the piece is parallel with the sidewalk, making the creation seem like it’s walking aside you. Barry Parker’s abstracted figure Dotzy is only 6.5-feet tall, and if you view it while facing either south on Main Street or from the east, the backdrops are a street or train tracks. But take Dotzy in while facing north means the clocktower aligns with the sculpture and the disparity of scale makes for an interesting juxtaposition.

Aside from the clocktower, the most distinguishing feature in Chelsea is the Jiffy Mix Plant. It’s so large that it can be seen in the backdrop for several sculptures, but there are two pieces whose shapes compete directly for attention with Jiffy’s large white silos. 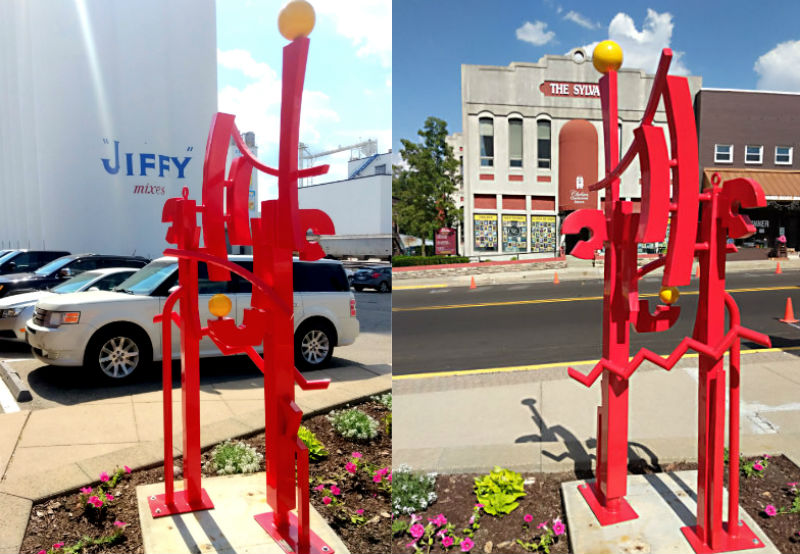 David Petrakovitz’s Red Shift -- a blend of red rectangles, squiggles, and curves holding two small yellow spheres -- is in front of Jiffy on Main Street. The plant’s white cylinders are a nice antagonist to the Red Shift’s bright primary colors, but the parking lot filled with cars means its not a clean backdrop. Turning around to look at the sculpture facing east across Main provides The Sylvain building as a backdrop, but the structure and the sculpture don’t mesh in the way the Jiffy Plant might if the parking lot were empty. 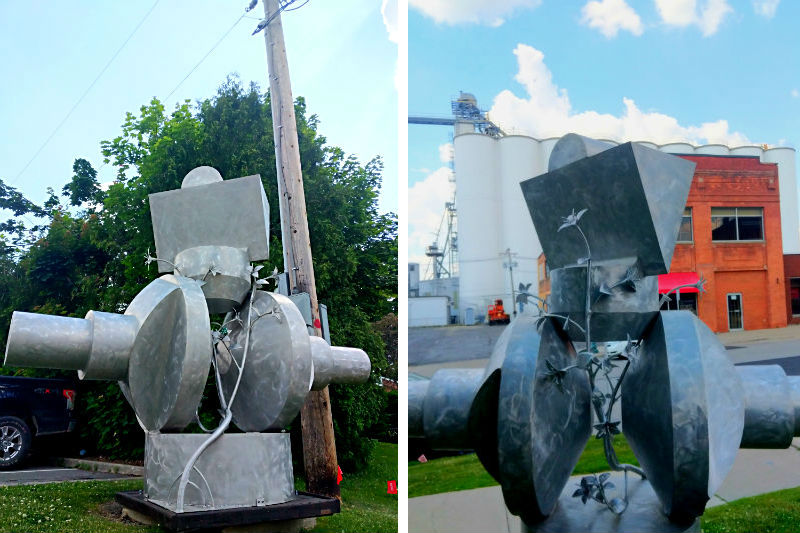 Douglas Gruizenga’s Aricatus Vine is an 8’ by 8’ by 4’ chunk of aluminum that sits next to a telephone pole. It’s also adjacent to an immediate parking lot and another one across West Middle Street that leads to the edge of Jiffy’s property. The setting would be an insult to a less-imposing sculpture, but Aricatus Vine is as tough as its surroundings. From a distance, it looks like a power-plant engine left on the side of the road, but as you get closer the vines and flowers become clear. It’s a soft touch inside a hard exterior, a gentle visual break from industrial overload.

ScupltureWalk provides a similar ocular balm amid life’s burdens, especially now when there’s almost nowhere to turn for art and culture in person. But unlike in a museum, which guides your eye and travels, ScupltureWalk trusts you to slow down, look around, and notice everything.

I'm glad I finally did.