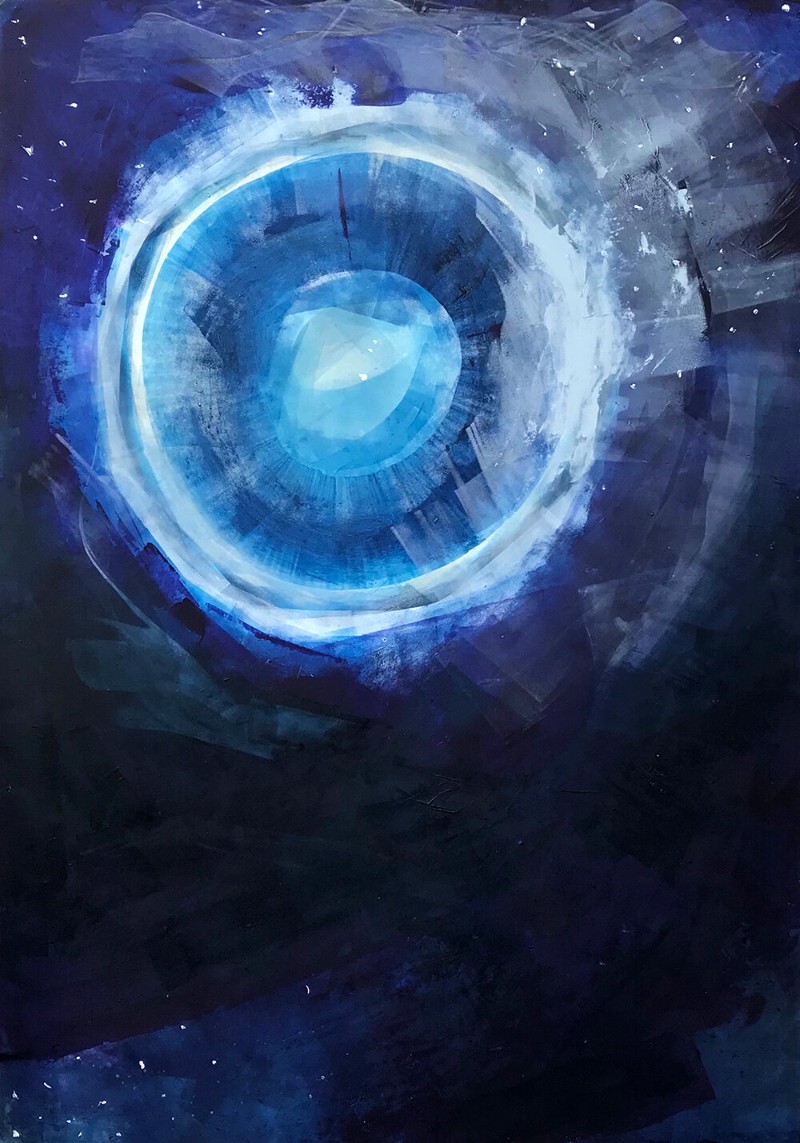 On Monday, I made my first extended stroll down Main Street since the pandemic shut down Ann Arbor and the world. While taking in the sites, I was noticing which businesses were open (a lot), which ones were closed for good (RIP Prickly Pear Southwest Cafe), which ones were new (Of Rice and Men, an Asian-fusion restaurant in the former Dessous space owned by the Blue LLama Jazz Club folks), and which ones were planned to open (InfusIV Hydration, which offers vitamin-infused IV drip therapy -- which feels aligned both with Ann Arbor's woo-woo hippy past and the city's tech-money-infused present).

But it was seeing WSG Gallery's empty space and partially covered windows that reminded me that I hadn't been keeping up with the art collective's move to online exhibitions. (Here's a June 18 Pulp article about why WSG had to pull up stakes from its prime location for the past 20 years and move entirely online, at least for now.)

John Carlos Cantú reviewed Cole's November 2015 exhibit, North, which has a similar feel to the work in Earth and Polar Work:

In Lynda Cole’s hands, North is not only a primer in the emotional power of abstract art -- it’s ultimately as much a state of mind.

Granted by this local artist’s definition, “north” is a psychological place, but when seen at downtown Ann Arbor’s WSG Gallery, North is as much a time as it is a place. And it’s in this fusing of time and space—both melding a particular state of mind -- where “north” resides.

“My future travel will have to have ice in it,” Cole says in her gallery statement. “Where ice is found I encounter stillness, a beautiful quality of light, large horizons of the sea and sky and the color and purity of the ice. These things contribute to a feeling of tranquility I don’t find in most other places.

“On a recent trip to the Arctic during the midnight sun,” continues Cole, “early one particular morning, I looked out over the Arctic Ocean and felt as if I was Alice falling down the rabbit hole. The sea was entirely still with bits of ice in it.

“The light quality of the sky was a pale palette, striped and moody. It felt unlike Earth.” 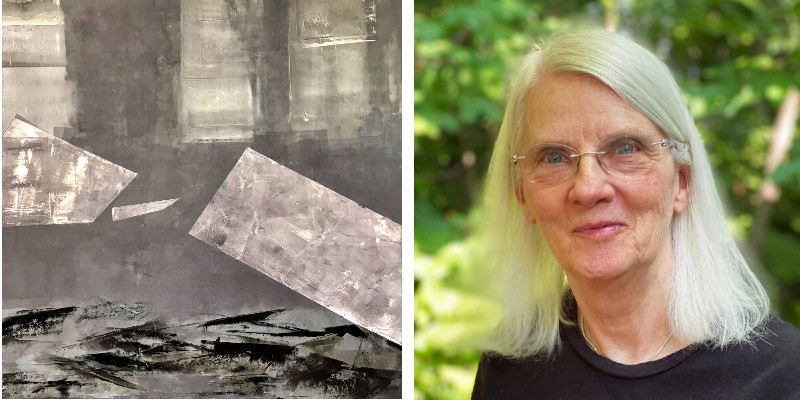 In her artist statement for Earth and Polar Work, Cole again mentions the power of frozen water on her creative process:

While nature has been a lifelong interest, the specific world of ice has been calling more loudly for the past five or six years. On recent trips to the Arctic and Antarctic the impressions made are difficult to explain although it is a story I feel I have to try to communicate. There is a feeling, in Antarctica especially, of isolation but wholeness or oneness at the same time. Scale and quiet play a large part in the feeling of polar regions. There are sounds of wind and water, birds and other life but they are interesting and welcome sounds, not noise. And, there is sometimes silence. I think of the space in some of my paintings as representing that silence. 'Water', especially - I like to stare at the 'blank' area of the top in 'Water'. It helps to take me to 'silence'.

The land of Antarctica was created by fire (volcanoes). Water and water in motion are all around Antarctica and drive many of the systems that make the Earth a home worth protecting. The scale for the water is large, the scale of the ice and land is large, the scale of the silence is large at times. The presence of quiet is what I have tried to honor in many of these paintings. 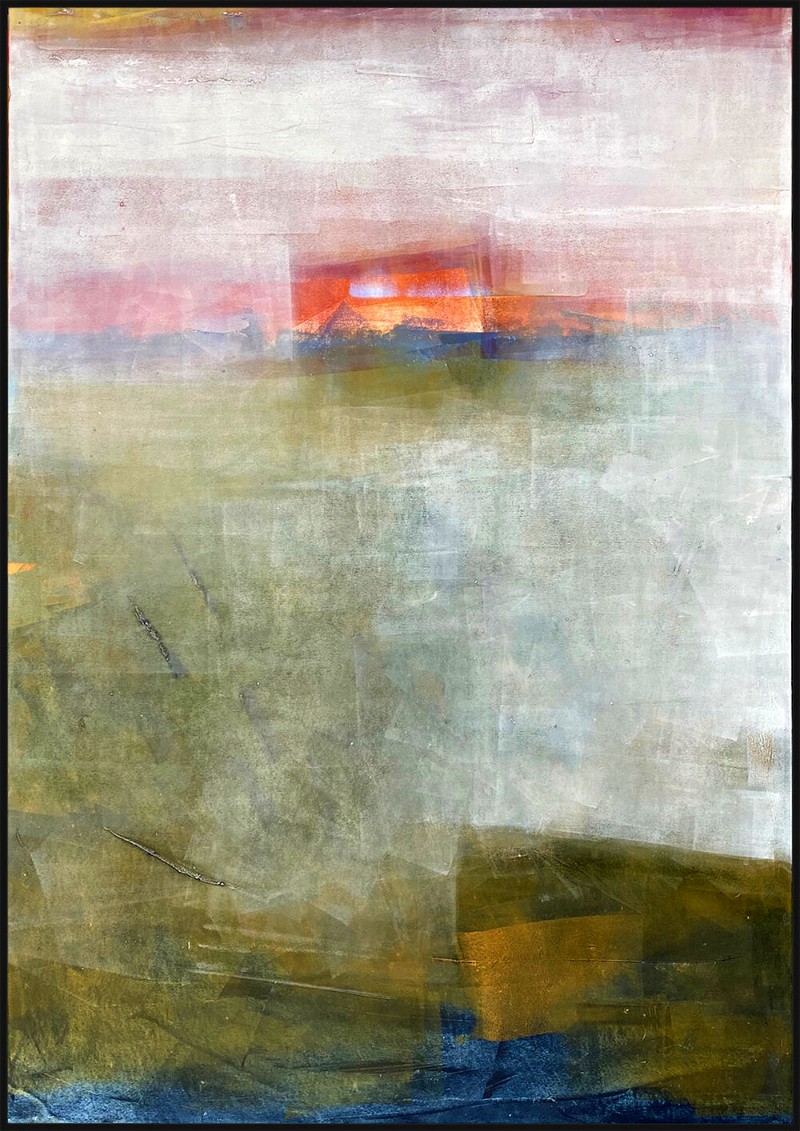 Looking at the paintings online, most of which were made with oil pigment sticks and cold wax, I tried to imagine how these abstract landscapes would look at their full size. I even took out a tape measure to seek the physical-world scale of each painting in order to think about how these canvases might capture my senses were I able to stand in front of them. I appreciate that WSG Gallery and other places are featuring art online, but the difference between seeing a piece in person, in 3D, in a sympathetic setting, versus a flattened image on a screen while sitting in my garage is enormous, so I've taken to creative measures in order to figure out a way to view art that makes me feel, to provide the sensations I get from absorbing a piece while paused before it while we're stuck in this virtual limbo life.

Cole's paintings are inspired by polar ice, fire, water, Earth, and space -- the elements of the universe -- which allows their simple geometry and colors to evoke many landscapes -- whether here on Earth or in the cosmos. They allow you to imagine any landscape that comes into your mind.

Mental escapades are encouraged when we're all locked down at home. Let your mind wander through Earth and Polar Work and imagine the places we wish we could all be, from Ann Arbor's Main Street to the Arctic ice caps.