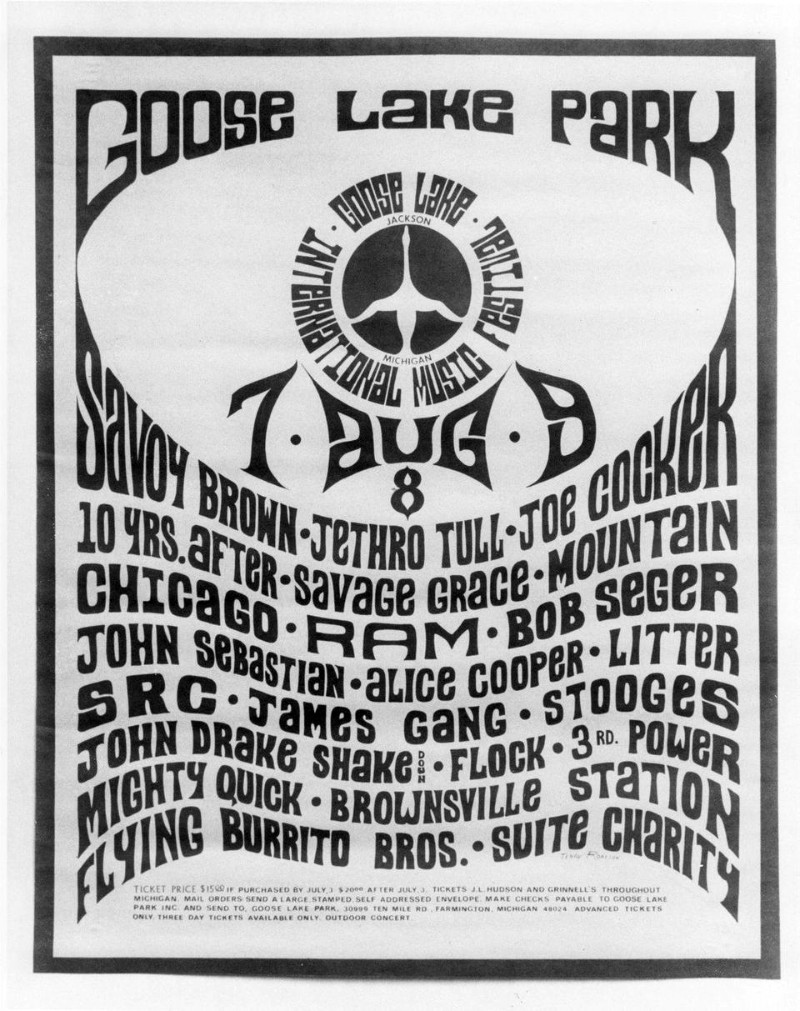 The Goose Lake International Music Festival was the Woodstock of the Midwest.

Between August 7-9, more than 200,000 people traveled from around the country to Jackson County's Leoni Township and set up shop at an otherwise unremarkable lake area where the got to hear some of the biggest name in rock 'n' roll including Jethro Tull, Chicago, Mountain, James Gang, then regional fave Bob Seger, and many more. Alice Cooper, Joe Cocker, and Savoy Brown were slated to play but did not, so the fest added The MC5 and Faces, whose singer Rod Stewart was having such a good time that the band canceled its next gig at the Fillmore East in New York and stayed in Michigan to party.

This weekend marks the 50th anniversary of the Goose Lake fest. It's had a lot of coverage over the years, some of which we've collected below, including two documentaries and a Nerd Nite talk on the festival. But the recent big news about Goose Lake is that Third Man Records unearthed audio from The Stooges' August 8 performance there, which was the last show by the band's original lineup, and have released it on vinyl and CD.

▶ MLive.com has a great collection of photos and articles on the festival here.

▶ This documentary is from the DVD created from an 8mm movie by Goose Lake Park owner Richard Songer.

▶ "More Fun: A soundboard recording of the original Stooges lineup's final concert is coming out on Third Man" [Pulp, June 11, 2020]

▶ The Forgotten 70's Festival That Was Actually Bigger Than Woodstock is a mini-doc.

▶ Tremendous video of residents' reactions to Goose Lake music fest (spoiler: they were not happy).

▶ Videos of Goose Lake performances, in order: SRC, Mountain, a combined clip of Mountain and John Sebastian, The Stooges