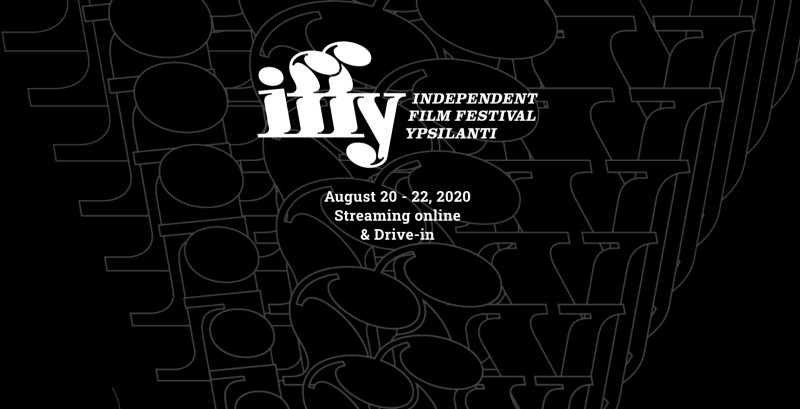 Back in January when the inaugural Independent Film Festival Ypsilanti (IFFY) was announced, the plan was to hold it at the Riverside Art Center, April 16-18.

We all know what happened next.

But rather than cancel the event, filmmaker Donald Harrison, who runs 7 Cylinders Studio, and multimedia artist Martin Thoburn did what so many others have had to do: moved the festival online.

Between August 20-22, numerous short films curated by Juliet Hinely and Hafsah Mijinyawa will stream each evening at iffypsi.com, though the kick-off evening will be free on Facebook or your can go to the the Normal St. parking lot at Cross by the Ypsi water tower for a drive-in screening.

Here's the schedule and links to trailers for the films in IFFY 2020:

Thursday, August 20th - 9pm (Special Drive-In)
Saturday, August 22nd - 7pm
A dozen short films that will light up your cinematic synapses—from running and digging to sniffing and eating to diving into realms of ourselves and the unknown—this program "rooted" in Midwest filmmaking will surely activate your senses. All Ticket Sales will be donated to We The People Opportunity Farm in Ypsilanti.
▶ Films and trailer

SKIN. SOUND. SYNTH.
Friday, August 21st - 7pm
A science fiction and futurism flavored exploration of culture and identity through skin, sound, and the synthesis of the two in motion. This is a celebration of people of color—black and brown—telling their stories and expressing themselves with visual and sonic experimentation. All Ticket Sales will be donated to Detroit Impact Center.
▶ Films and trailer

BEST OF OTTAWA
ANIMATION FESTIVAL 2019
Friday, August 21st - 9pm
The Best of Ottawa touring program showcases audience favorites and award winners from the 2019 Ottawa International Animation Festival competition. The package offers a sampling of exceptional animated short films that explore moments of humor, profundity and inspiration. The works in this collection provide a unique cross-section of some of the best contemporary film artists from around the world. All Ticket Sales will be donated to Growing Hope.
▶ Films and trailer

FLIP THE SCRIPT
Saturday, August 22nd - 9pm
Short films that defy the status quo and boldly take paths less traveled or make their own. This program includes a vast expanse of visually intense videos ranging from eye-opening documentaries to strange animations and one-of-a-kind collages. Expect anything but the ordinary! All Ticket Sales will be donated to Hero Nation.
▶ Films and trailer

Go to iffypsi.com for more details and to sign up for announcements.