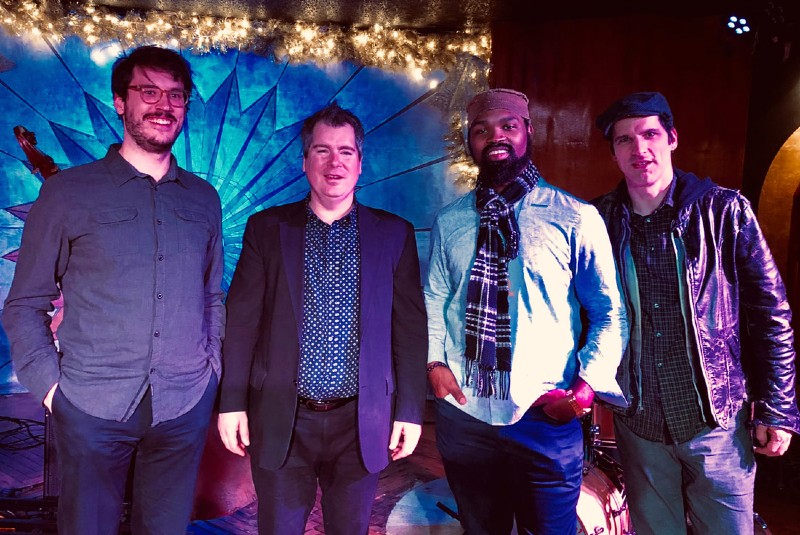 Q: The Live album was recorded from a performance last year. What motivated you to release it?
A: I really liked the performances and the spontaneous energy. The performances were very different than anything that we played on record.

Q: Why was the performance at the Dirty Dog Jazz Cafe used in particular?
A: I received CDs of all of the shows from the Dirty Dog at the end of each night (Wednesday-Saturday). I went through all of the CDs and picked my favorite performances. ... Jeff Brueggemann did a nice job with the mix and then I had the masters done at Baseline Audio Labs by Chris Goosman.

Q: The album is quite enjoyable. What led you to select the songs that were used?
A: I picked songs that had unique performances. Many of my songs open up into a section of soloing over only one chord, so these picks really show how we operate together with little to no arrangement. I like to leave performances open for the whole group to influence in a spontaneous way. Songs that I picked were solid performances that were in some way unique from the records. Two of the songs are premieres. “Surrender” and “Leafar” haven’t been recorded yet.

Q: What inspired you to compose "Surrender" and "Leafer"? They're beautiful songs.
A: Well, great Sean! Super glad that you are digging the music. Often I write from a feeling and then when the song is finished I give it a title. "Surrender" started as a feeling of “Man, I need to settle down right now” and then once it was finished I called it "Surrender." Partly, too, because I feel like life is so jacked up ... that we all need a chance to chill. "Leafar" is Rafael backward. That’s his alternate moniker for projects not necessarily jazz-oriented. That vamp has been around since 1998! I introduced this band to it at my Weber’s gig (Keaton and Rob) because that was my trio at the time. Since the live performance, I have a melody written, which will likely show up on an album.

Q: My favorite track is "Kahil." What's the story behind this track?
A: I wrote that song with an African thumb-piano part in mind. I wrote most of the Tall Trees record in a month span, some of the tunes the night before we recorded them. "Song for Kahil" was originally called “Mbira,” which is the name of the thumb-piano instrument. Then I changed the title to pay tribute to the great Chicago-based musician Kahil El-Zabar who uses the mbira in his music so beautifully. He has been a great influence on me since I also play hand percussion.

Q: When getting ready for shows, what does the rehearsal process with your band look like?
A: We don’t rehearse. My songs aren’t that difficult. I like the fresh energy to come through unrehearsed. Everything that you hear is spontaneous other than a few guidelines like, “Start 'R is for Richko' with an 8-bar intro like on the record."

Q: How has the pandemic affected your career? How do you find inspiration during these difficult times?
A: This was my way of pulling myself up by the bootstraps and doing something creative. This is one of three projects that I’ve completed during COVID. Music is just in my veins, so I’ve got to share it somehow. I love to cook. I’ve taken up intermittent fasting. I also enjoy spiritual reading and meditation.

Q: Are there any plans for new music in the future?
A: Yes, I have the next record written. I’m planning to record and release it sometime next year.

The Rob Crozier Jazz Ensemble performs on the outdoor patio at Weber's Restaurant on September 5, 9-11 pm, to celebrate the release of "Live," which the group will perform in its entirety along with other tunes.