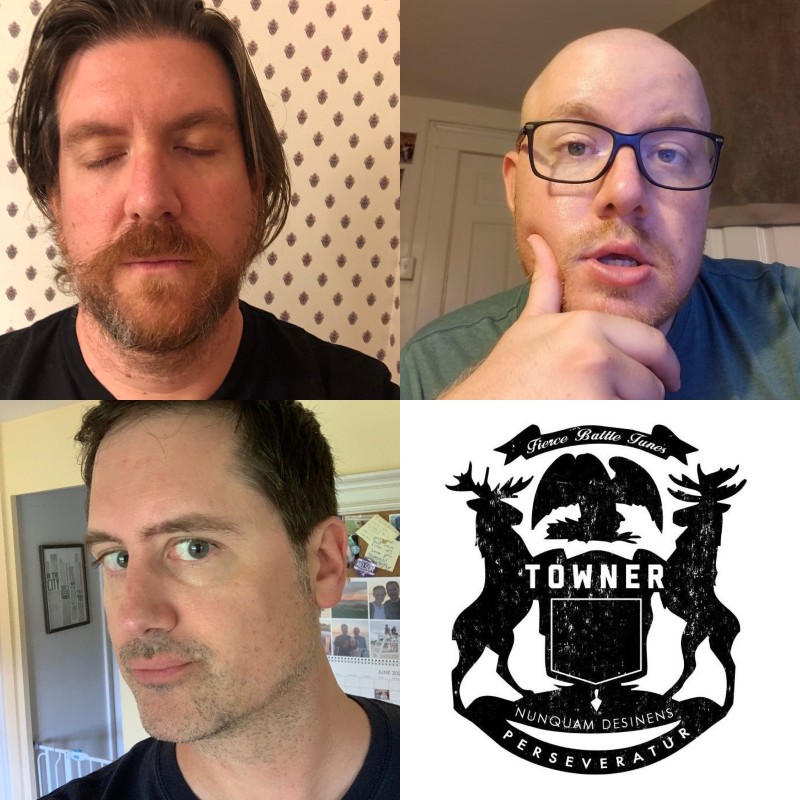 Towner's debut album, This Is Entertainment, has all the earmarks of a power-pop classic.

The Ann Arbor trio of bassist Jason Horvath and guitarists Kris Ehrig and CT James recorded 12 songs for the LP and every tune could be single. Towner originally intended This Is Entertainment to be an EP, but the musicians were so happy with the results, they just kept recording at home, with Ehrig programming the drums. This Is Entertainment isn't exactly lo-fi, but there's a distinct bedroom-pop ambience to the record and that intimacy and warmth serves the band's songs perfectly.

"We had plans to record the 'normal' way in a studio in April," Ehrig wrote in an email, "but that got canceled for quarantine. At that point, I started recording a few songs on my own that weren't going to be on the record just to pass the time and keep myself sane. Then our drummer [Alex Molica] dipped to Vermont and everything got thrown out the window. Instead of scrapping it and starting over, or quitting altogether, we looked at a recording process that was working and switched to the material we had originally planned."

Towner's combined sound is reminiscent of the most melodic Guided By Voices songs, with Ehrig's tunes edging more toward those of The Only Ones -- mainly because of his slightly snarly singing, though he's a much stronger traditional crooner than Peter Perrett -- and James' compositions yanking out the catchier aspects of Weezer's music and leaning into them while discarding the annoying stuff (basically, being Weezer). I say this with peace and love as a Weezer non-fan and as someone who was knocked out by This Is Entertainment, but the way Towner plays with doo-wop-y harmonies and 1950s and 1960s rock 'n' roll vibes under its modern, hazy, indie-rock top layer frequently reminded me of the sorts of things Rivers Cuomo toys with in his songs.

Ehrig answered some questions about how Towner put together This Is Entertainment.

Q: How did Towner get together? I found your post on Bandmix asking for musicians and I was like, "That really works?"
A: No! It certainly does not work, haha. I had always been more of a sideman in bands, but when I moved to Ann Arbor I had a really hard time finding other people to play with. Ann Arbor/Ypsi has an amazing music scene and everyone we've met has been extremely nice, but it's hard to break in if you're not a known quantity. Eventually, I decided to throw my own stuff out there to see what would happen. I met CT, who had also recently moved back to Ann Arbor, through Craigslist of all places, but we hit it off right away. Jason and I have known each other for a long time and played in bands in other cities, so when we needed a bass player earlier last year, it wasn't really a discussion. Luckily, at the time, it was four musicians, recently moving to Ann Arbor in the same situation.

Q: Is the name Towner a nod to Ann Arbor Townies? Towner Road in Ypsilanti?
A: You know what, you're the first person to put that together. I said to a friend when talking about Ann Arbor, "We're not exactly townies because we're not from here originally, we're more like towners." Wanted something simple and direct for a band name. It's also a reference to the ridiculously underappreciated aMinature. And, for the record, there's a Towner Blvd. in Ann Arbor, you just have to look for it

Q: What's the story behind naming the album This Is Entertainment? Gang of Four reference to their Entertainment! album?
A: That started when this was going to be an EP. I realized the leftover songs I was working on all sounded like "That's Entertainment" by The Jam. Then it just stuck. Gang of Four are unimpeachable and we were originally going to have the exclamation point on the end of the title in homage but thought it was a bit too much. Probably the wrong move now that you mention it. Anyway, we had a sense of "does this really matter?" with the shape of the world, but Jason said something to the effect of if you don't take the time to take care of yourself, you'll go crazy and that doesn't help anybody. So we acknowledge that entertainment from an indie-rock album in the year 2020 isn't a priority, but every little bit helps.

Q: How did you go about recording / rehearsing / writing the album while under quarantine?
A: Everything was recorded at home; we'd get the basics done then send to whoever needed to lay down the next part. There were a few masked recording sessions together as well. Not having any restrictions on time or money was eye-opening. I used to laugh at bands taking years to make records, but being able to listen and change things as the songs dictate is so refreshing. Many of these songs were stuff we were playing live since late last year and had been planning to record, so those initial arrangements were mostly set. On top of that, both CT and I write profusely and there's never a problem of coming up with more material. We've started work on the next record already.

Q: You've been donating your Bandcamp music sales to the NAACP Legal Defense and Educational Fund and are doing so again with This Is Entertainment's proceeds as well. Tell us about why this org is important to the band.
A: Black Lives Matter.

There are so many great organizations on both a local and national level that are fighting the real fight. We choose NAACP LDF because of the national reach and to support something that will be evergreen. The amount of money we make on our music would just be going there and other organizations anyway. Plus, Bandcamp Day is my favorite holiday and it's the best thing to happen both for artists and music in general. It's a way to maximize those donations. Buy more music on Bandcamp! It's fun! Fun is OK!