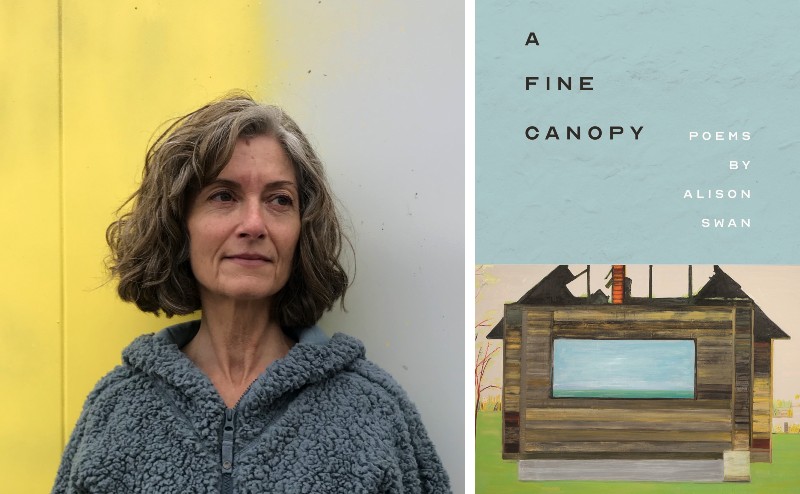 Q: A Fine Canopy’s description calls it ecopoetry and situates the poems on peninsulas around the United States, including Michigan. Tell us about this book and how you see it as ecopoetry.
A: Pretty much everything I write is informed by the fact that our spectacular home planet is beleaguered. A Fine Canopy arose from my relatively outdoorsy (part luck, part discipline) life on Michigan’s lower peninsula—and also from visits to the upper peninsula, the southern tip of Florida, and the Olympic Peninsula. I actually lived for a time in Fort Lauderdale, then Seattle, so they are home places.

I am in love with wild nature, especially with what ecologists call edge places, such as the places where land meets water. The caddis worms in the first poem, for instance—I really did see them on the beach at Saugatuck, dozens moving from land to water camouflaged by bits of sand and leaves. I find that the more-than-human natural world—even tiny scraps of it, a crow in the road, for example—creates for me the feeling of possibility, a blend of groundedness with flight. Priceless, really.

Q: You teach at the Institute of the Environment and Sustainability at Western Michigan University. You also have been working to preserve the Saugatuck Dunes State Park. These activities focus on climate change in different ways. In what ways might poetry address, or even fight, climate change, too?
A: You’re right. Protection of the lakeshore at Saugatuck (or open wild land anywhere) is directly connected to our climate crisis—to our various environmental emergencies, which I believe are rooted in human use and abuse of land. I am one of many who believe that climate change is a symptom of a very large problem. Too many of the most powerful among us do not feel a responsibility to protect life: healthy land, clean water, clean air—all of which are inextricable from what many people call nature. In fact, many of the most powerful people among us often willingly sacrifice these necessities of life. Let’s acknowledge right here: people are not separate from this “nature.” What we do to land we do to ourselves.

Maybe the conversations and communities that spring up around literary art (around all art really), including poems, might at least help us all stick together—and not just with other humans, with the other species on earth—and keep going. Just to keep going, with purpose and joy, when so much seems to be falling apart—what an accomplishment, don’t you think?

Q: Certainly, especially when things feel increasingly dire. Many of the poems in the first section include the word “dark” or variations of it, such as the line, “darker than this dark sky,” or the poem titled “Deep Dark.” Another poem carries a date of two days after the 2016 presidential election. How do you see this first section in relation to the other three in the collection?
A: You probably noticed that in A Fine Canopy, darkness is often a good thing or at least a neutral thing. Isn’t it fun to consider that bright white light might not always be the best thing? I mean this quite literally, but I mean it metaphorically, too. I’m extremely fortunate to live in a place that is quiet, dark, and safe at night. We hear owls sometimes. Our neighbors are friendly. No one’s campaign signs are stolen or vandalized. In 2020, such calm is no small thing. And everybody deserves access to it.

Q: I was also intrigued by the poems that were inspired by diaries and letters at the Bentley Historical Library. What compelled you to do that research, and what drew you to those women’s voices?
A: In the early 1990s when I spent time at the Bentley Library, I was on fire to rescue the voices of women. I’d been reading books like Writing a Woman’s Life, Stealing the Language, The Mad Woman in the Attic, Susan Griffin’s extraordinary Woman and Nature. I never quite forget what I learned long ago: some women are controlled—sometimes willingly—by men. You have to wonder how this impacts the outcomes of elections, right? How could members of a demographic who so well know what it feels like to be subjugated be so willing to subjugate others?

Q: You host the Eco Book Club, free and open to all at Literati Bookstore. What do you look for in the literature about the environment that you read? What have you learned from the group’s discussions?
A: I love our conversations. Eco Book Club is a relaxing collegial place (virtual for now) where we get to talk about ideas. Most recently we talked about Lauret Savoy’s important, deeply researched collection of essays, Trace. By the end of the conversation, I liked the book even more, and I certainly knew it better. We humans, many of us anyway, benefit from mulling things over together, in person.

As for what we read—in these tumultuous times, books can be ballast. I look for books that help us imagine together what keeping-going might look like. I choose the books I teach in the same way. I haven’t laid my hands on these two new titles yet, but I look forward to doing so: The Reindeer Chronicles and All We Can Save.

I very much miss the days when we gathered around café tables upstairs from the bookstore, light from the northern sky sifting through the windows, the fragrance of espresso drifting by. Sometimes strangers would stumble on our conversations and join in. I will never take the placed-ness of in-person gatherings for granted again. On the other hand, I did recently get to attend a conversation between Scott Russell Sanders and Robert Michael Pyle, two environmental writing elders, hosted online by Seattle’s Elliott Bay Book Company. So there’s that.

Q: Your virtual event will include a conversation with Holly Wren Spaulding, and she is named in your acknowledgments in A Fine Canopy. How do you two know each other?
A: Holly and I go way back to the late great Shaman Drum Bookshop (on State Street near the Diag) where I worked in the 1990s, truly a heyday of literary book publishing. I met Sandra Steingraber and Gary Snyder, to name just two great writers, and I got to work alongside Keith Taylor and Lisa Wozniak, to name just two of my great colleagues.

Holly writes powerful little (literally) poems that you can carry around in your head all day, turning them over and over. They just keep opening outward. She’s also an extraordinarily gifted teacher. Fifteen years or so after I had completed the MFA program at the University of Michigan, I apprenticed myself to Holly for a while. I was trying to re-center poetry in my life after a side trip into grassroots environmental activism, an all-consuming world Holly has also inhabited. She creates rich, disciplined, joyful spaces for anyone who wants to sink into their imagination.

Q: So, what’s on your nightstand to read and recommend?
A: I have stacks of in-progress books all over the place. In no particular order, I’d like to share these: New Poets of Native Nations (Heid E. Erdrich), On Art and Mindfulness (Enrique Martinez Celaya), The Land of Little Rain (Mary Austin), Grief’s Country (Gail Griffin), Shapes of Native Nonfiction (Washuta and Warburton), Still Life With Two Dead Peacocks and a Girl (Diane Seuss), Finna (Nate Marshall), This Land Is Our Land (Jedediah Purdy), Yellow Dog Journal (Judith Minty), Dream of the Black Wolf (Keith Taylor), and Familiars (Holly Wren Spaulding). Patricia Clark’s newest book of poems arrived yesterday. It is currently quarantining in the garage. I’m awaiting Margaret Noodin’s two books of poems and Peter Frampton’s memoir. I really did just walk around and type in these titles. Of course, I’m regretting that I can’t name every book published by my writer friends over the last few months.

This summer, after 40 years, I reread Watership Down by Richard Adams. I was taken aback by its sexism—for one thing—but what a beautiful verbal portrait of a place (the English countryside) and what resonant storytelling. You know that old-fashioned experience of being immersed in another world that you have created in your own head with the guidance of an author? I find that that too gives me the sensation of groundedness and flight, at once.

Q: There are many things going on right now that affect creativity and are causing uncertainty in the future. That said, what are you working on next?
A: I so appreciate this question. I’m beginning to look back on decades of an almost daily writing practice. I have accumulated a lot of notes, drafts, ideas, finished (maybe) pieces of writing. As soon as I submit my grades in December, I’m going to turn my attention to those. Some visual art might be involved. I hope you’ll forgive me for not being more specific than that.

Alison Swan will read and be in conversation with poet and teaching artist Holly Wren Spaulding in a virtual event Tuesday, October 6, at 7 pm through Literati Bookstore.